This year has been a bumper year for ransomware and its operators. Ransomware gangs are demanding millions; if those millions are not paid in time, then data stolen before encryption is either released to the public or sold to the highest bidder. Big names in the cybercriminal underground have returned with an entirely new ransomware family—namely Evil Corp and its new creation WastedLocker. Not only is there a return to form for old hands, but new ransomware strains also seem to be bursting up like mushrooms after a spell of rain. NetWalker and Exorcist immediately come to mind. The latter is the subject of this article.

Discovered in late July by MalwareHunterTeam, the Exorcist ransomware is so new to the scene that information on it had been incredibly sparse. That was until Leandro Velasco published an article shedding much of the code’s mystery—and in great depth. The article is a must-read for anybody wanting a technical analysis of the ransomware. In providing a brief overview of Exorcist, it seems to be distributed via a Pastebin PowerShell script that runs in memory. The script takes from lessons learned by Sodinokibi affiliates and is based on the “Invoke-ReflectivePEInjection.ps1” script, further optimized to include a function that passes a base64 executable into the main function of the script. It is also possible that the script is generated by the no-longer-supported Empire framework.

The code itself is not obfuscated—while common practice with other types of malware, it is often not deemed necessary for ransomware by its developers. Part of the reason for this is that the encryption process is in itself very noisy and once that begins, any pretense of stealth is quickly forgotten and speed is the main requirement. Some ransomware strains do obfuscate their code, but it is not an unwritten rule that all malware be obfuscated.

The malware’s first operation is to check the geolocation of the infected machine, which is done by checking the language and keyboard layout of the machine in question. If the result is any of the nations that make up the Commonwealth of Independent States (CIS)—which includes many of the nations that made up the Eastern Block during the Cold War and now still have close ties to Russia—the malware’s operations are immediately stopped. Why this is done is discussed in greater depth in the second part of this article.

Screenshot of a ransom demanding message displayed by Exorcist ransomware: 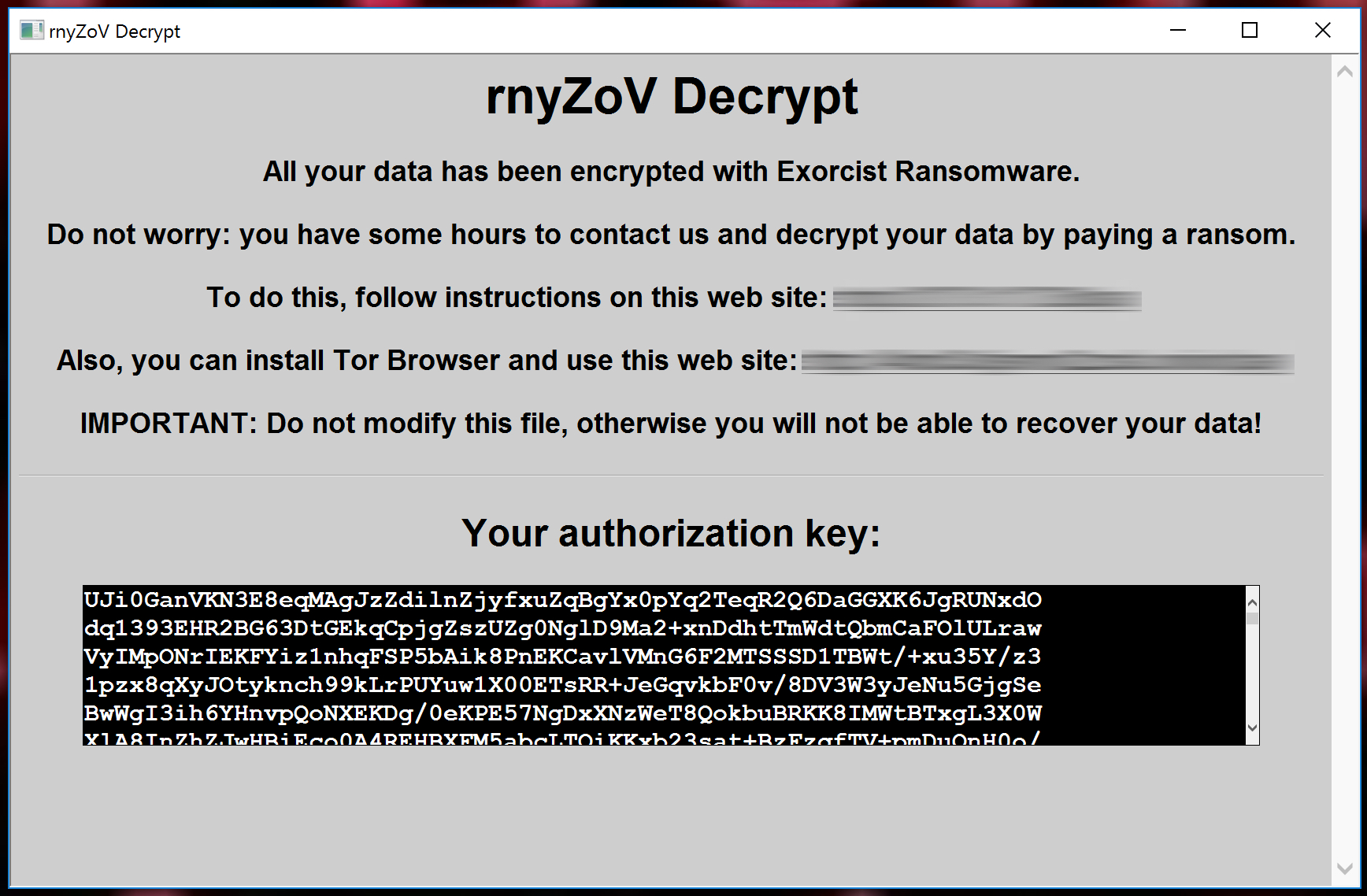 If the geolocation check returns a nation not making up a part of the CIS, the ransomware executes several commands that disable and remove system backups. The commands will also look to terminate any system processes that may prevent encryption of certain file types. This is followed by the malware writing the public encryption key and the private key, as well as the file extension used to disk. Before encryption occurs, the malware will extract information including the username, hostname, OS version and keyboard layout and send those to a server under the attacker’s control. Once this is complete encryption begins utilizing multiple threads to drastically decrease the time to encrypt data. Finally, the wallpaper of the system is changed and the ransom note is dropped.

If you feel that you may have suddenly become a victim of Exorcist, there are a few tell-tale signs. First, the wallpaper announcing you’ve become a victim reads as follows:

When the ransom note is opened it will read:
“rnyZoV Decrypt
All your data has been encrypted with Exorcist Ransomware.
Do not worry: you have some hours to contact us and decrypt your data by paying a ransom.
To do this, follow instructions on this web site: hxxp://217.8.117.26/pay
Also, you can install Tor Browser and use this web site: hxxp://4dnd3utjsmm2zcsb.onion/pay
IMPORTANT: Do not modify this file, otherwise you will not be able to recover your data!

An authorization key will be provided by the attacker once the ransom is paid. However, to find out what the ransom is the victim needs to download a Tor browser and visit the address provided. It is unclear if the ransom amount is fixed at 5000 USD in Bitcoin or changes from victim to victim, depending on what the attacker perceives they can pay. The website reads as follows:
“Exorcist Ransomware
Order
If the payment isn’t made until 2020-07-25 10:33:57, decryptor price will be increased 3 times

What’s the matter?
All your files have been encrypted with Exorcist Ransomware.

The only way to decrypt them back is to buy Exorcist Decryption Tool.

It will scan all your network and check all encrypted files and decrypt them.

To be sure we have the decryptor and it works you can use Free Decrypt and decrypt only one file for free. But the only file you can decrypt is image (PNG, JPG, BMP), maximum size 3 MB, because they are usually not valuable.

Instruction:
You need to create a crypto wallet. You can read more about crypto wallets here: hxxps://bit.ly/379vYBt
Learn how to buy cryptocurrency (Bitcoin). Some links where you can find information here:
Bitcoin: hxxps://bit.ly/38nohHM
Copy the wallet number from the address field (depending on what you have chosen) and transfer the necessary amount of cryptocurrency to it. You can read more about translations here: hxxps://bit.ly/36br2dK
After paying the ransom, your files will be decrypted and you will be able to continue your work.

Payment
Decryptor price: 5000$
Pay in Bitcoin:
bc1qyzjj2hrjr3sspjwj9ckd02fz8kmynj9xkjrkgv
0.561799 BTC
When funds reach one of these addresses, you automatically get decryption tool.

A Campaign May Be on the Horizon

Performing a search at the time of writing on the provided address in the ransom note reveals that no funds have been transferred to this address as of yet. Given how new the ransomware is, this is not a surprise. Further, no victims have announced publicly that they have fallen victim to Exorcist to the best of this writer’s knowledge. It may be that Exorcist has not seen wide distribution yet, as it may still be in development or slowly ramping up operations.

While there seem to be no active campaigns making headlines at the moment, this is probably not likely to last. One bit of news that emerged recently is that a hacker released a list of IP addresses for more than 900 Pulse Secure VPN enterprise servers. The list published in plaintext also included several usernames and passwords. The release was made on a Russian underground hacker forum, which is known to have multiple ransomware gangs contributing and actively posting. The list includes Sodinokibi, NetWalker, Lockbit, Avaddon, Makop and importantly for the purposes of this article Exorcist. In general, the forum is used by the gangs to hire more developers or affiliates tasked with distributing the ransomware.

The reason why the dump of Pulse Secure VPN credentials would make headlines is that many of the above-mentioned gangs have actively been targeting known vulnerabilities in VPNs to compromise an enterprise network. As the dump was done free of charge and in plain text, those using unpatched VPN products should be worried enough to patch them as a matter of priority—it may be that in the near future major enterprises will be seeing the Exorcist’s wallpaper and ransom note and be visiting their website.

The main reason why the developers behind Exorcist and several other malware families tend to not want to infect computers in Russia, its neighbors, and the country’s interest in the geopolitical stage is that the Russian government turns a blind eye to cybercrime conducted by nationals, as long as Russia and its interests are not targeted. This is why a quick internet search will reveal cybercriminals wanted in the U.S. or Europe posing in front of luxury cars bought with the proceeds from their criminal activity.

Further, it seems to be the case that rather than bringing these people to justice, Russian Intelligence will employ their expertise to supplement their own cyber warfare and cyber espionage operations. These rumors began some 20 years ago and recent events seem to prove they were closer to reality, further supported by skilled coders in the CIS and their earning potential. For many, it is far more lucrative to hack and be approached by the intelligence agencies in question than to work within the IT sector. Since immunity seems to be granted to hackers as long as they leave Russian interests alone, becoming a hacker seems to be more of a logical financial decision than the perceived view by most of society as hackers being social pariahs.

This scenario was further confirmed in 2019 when the Russian government passed laws that enabled the creation of a self-contained internet modeled after the one implemented successfully in China. A report published investigating the new law and its expected effects believed that the law would help further flame the flames of cybercrime, whether state-sponsored or independent, financially motivated hackers, and further the status quo mentioned above. The funny thing is the law would make it easier to crack down on hackers within Russian borders; however, attacks on Russia’s rivals such as the U.S. are seen as serving Russian interests even if done by cybercriminals.

An article about the relationship between the Russian government and its hackers, as well as hackers in neighboring states, concluded:

“The availability of highly skilled and technically well-versed individuals also presents a pool of potential proxies that can be mobilized at a moment’s notice. Often, people will mobilize themselves and take political action in support of the government, as has happened in Estonia in 2007 and in Ukraine since 2014. Governments differ in their ability to catalyze such activity and the extent to which they are in a position to merely endorse, orchestrate, or actively direct their outcomes. In countries where public institutions and the state’s ability to exercise control have deteriorated, it is an uphill battle to break the increasingly entrenched incentive structures reinforcing existing proxy relationships. Meanwhile, the controversy over law enforcement cooperation, including mutual legal assistance and extradition, shows the limits of international cooperation and external influence. The phenomenon described in this chapter is therefore a cautionary tale of the potential pitfalls when a state significantly weakens or collapses and the consequences that will reverberate for decades to come.”

For those tasked with defending networks against Exorcist and other ransomware gangs, expecting those who committed the crime to be arrested and brought to book is a pipe dream. Rather, the focus should be to do everything possible to prevent the attack in the first place.