Regardless of your place in the K-12 school system, students are the number one priority. With the new school year upon us, educators are taking an especially hard look at school safety and violence prevention.

Why? Because just a single incident of youth violence is one too many. The problem? It’s becoming increasingly difficult for school administrators and law enforcement to uphold student safety and root out violent behavior on school property.

Here, we’ll help you get to the bottom of violent crime on campus. We’ll discuss the causes of youth violence, the early warning signs you need to know, and how you can spot them throughout your school district.

Generally speaking, school violence refers to any violent incident that happens on or around school grounds. Simply put, if an incident happens anywhere that could be considered school property — buses, hallways, soccer fields, etc. — it’s an act of school violence.

That said, even toxic behavior that occurs on the way to or from a school-sponsored activity, such as an after-school event, might also be considered school violence. Regardless, you need to know the types of violent behavior that could be happening in your school district:

With students returning to campus, it’s natural to wonder if their arrival will create a tinderbox of violent behavior. In turn, many school administrators are looking for a way to stop youth violence before it goes from bad to worse.

The United States Secret Service and Department of Homeland Security partnered to research school violence over the past decade. Their most recent study examines 67 disrupted plots of school violence that occurred between 2006 and 2018. The findings in this report offer educators a glimpse into some of the most significant early warning signs of violent behavior, which include:

In nearly all plots included in the study, bullying was identified as a major contributing factor. For at least 21% of the school violence plots, however, bullying was the number one motivator. According to the report, these plotters wanted revenge against those that bullied them at school.

Bullying is an issue that continues to plague schools across the country. It can lead to many issues for students, including lower academic performance, drug and/or alcohol abuse, depression, anxiety, and suicidal ideation or behavior.

Researchers identified suicide to be one of the most significant motivations for school violence plotters. In fact, 37% of plotters expressed a “willingness to die, intended to commit suicide, or planned to commit suicide-by-cop.”

Like bullying, suicidal behaviors don’t indicate on their own that a student is going to commit a physical attack. Many students who suffer from poor mental health experience suicidal ideation, self-harm, and digital self-harm — but that doesn’t mean they’re plotting school violence.

That said, mental health issues are noteworthy as an early warning sign of violence in general, whether it’s targeted at others or oneself, and should be addressed appropriately.

According to the report, 91% of school violence plotters experience life stressors in the five years leading up to their would-be incident. Life stressors, such as those listed below, can negatively impact a young person’s mental health and lead them to act out compulsively, such as through violent behavior.

Common life stressors identified in the report include:

Over two-thirds of plotters had an obsession with violence or violent themes. For example, 40% exhibited an especially strong interest in the Columbine High School shooting. Others had an interest in Nazism and/or white supremacy.

Lastly, the report also notes that 94% of plotters shared their intention to attack in some shape or form, either to a friend, fellow student, or family member. For this reason, how students communicate with themselves and others is a significant early warning sign.

“Concerning” communications might include any fascination with violent acts or ideologies, frequent discussion of these topics, hate speech, or threats to harm themselves or others.

Is school violence getting worse?

For all of us, and particularly if you work in K-12 education, it’s impossible to hear or read these names without feeling a pang of heartache and dread. In the wake of these and many other tragedies, many school administrators feel as if school violence is on an upward trajectory.

The truth? They’re not necessarily wrong. As tough a pill as it is to swallow, school violence is more common than you might think. According to a 2019 survey from the Center for Disease Control, 44% of U.S. high school students had one or more violent experiences in the previous year. These included bullying, physical violence, being threatened by a weapon, dating violence, and sexual assault.

A separate report from the National Institute of Justice analyzed several major data sets around violence on school property. Although their review concludes that physical bullying and threats have decreased over the last few decades, there’s been an increase in the number of multiple-victim homicides related to schools in recent years.

In fact, according to data from the Center for Homeland Defense and Security (CHDS), shooting incidents at K-12 schools have steadily risen since 1970, but have taken an especially steep climb as of late. For instance, there were nearly 250 shooting incidents in 2021, compared to just 46 in 2016. More importantly, the number of victims either killed or injured by gunfire on school property has increased at almost an identical rate.

Unfortunately, preventing school violence isn’t as easy as it should be. Why? Because most school districts are facing the following challenges:

In essence, the act offers grants to state and local governments so that they can implement technologies, such as a cloud monitoring solution, that will improve their threat assessment and reporting capabilities. In doing so, schools can overcome their limited resources and lack of oversight into student communications — including those based in the cloud — so that they more effectively root out violent behavior.

When it comes to violence prevention your district should be deploying multiple strategies simultaneously. After all, you need your bases covered.

However, if there’s any single solution that is most commonly overlooked, it’s cloud monitoring. Many districts monitor student communications, browser use, and content consumption on social media and/or external places online. Few are monitoring their own, school-provided technology such as Google Workspace and Microsoft 365. But, that’s where students are increasingly spending their time, communicating with each other, and leaving behind the most overlooked warning signs of potentially violent behavior.

By continuously keeping tabs on your cloud domains, including Google Workspace or Microsoft 365, a cloud monitoring platform like ManagedMethods can automate risk detection. Simply put, the technology scans your cloud data for signals that might indicate a threat to student safety.

For example, it can detect instances of self-harm, cyberbullying, or threats of physical violence. In turn, your designated school resource officers, counselors, and/or other relevant administrators can be automatically notified of the incident and the parties involved, allowing you to rapidly initiate your response protocols. Once threats are investigated, you can implement the appropriate resolution or notify law enforcement if necessary.

As far as student safety is concerned, every edge matters — and there’s no advantage more significant than the power of automated threat detection. 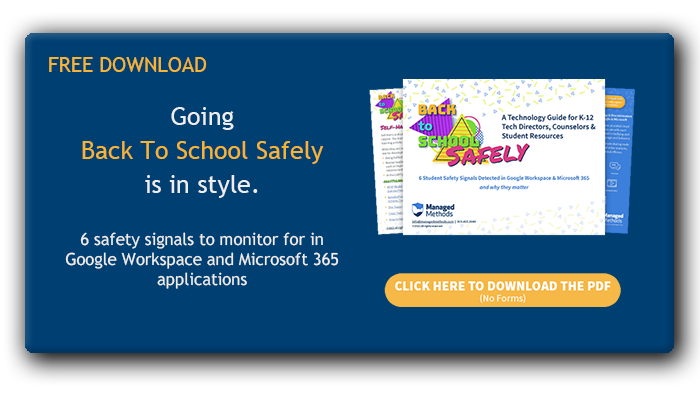 The post 5 Earliest Warning Signs of School Violence and How to Spot Them appeared first on ManagedMethods.

*** This is a Security Bloggers Network syndicated blog from ManagedMethods authored by Alexa Sander. Read the original post at: https://managedmethods.com/blog/school-violence/