The Biden administration is taking the Russian cyber operations ecosystem to task with sanctions pointed at both established Russian companies as well as Russian-controlled entities created by the FSB, GRU and SVR for operational purposes. Coupled with the U.S. Treasury sanctions, a joint advisory from CISA, NSA and the FBI identified the SVR (Russian Foreign Intelligence Service) as being responsible for the SolarWinds supply chain compromise. The advisory lays bare the “tactics, techniques and procedures used by the SVR.”

The joint advisory points to five publicly known vulnerabilities which the SVR and their cyber actors are exploiting to gain footholds into targeted networks. They also highlighted the SVR’s ongoing efforts to continuously scan and target the United States government, and by extension, those entities supporting the government, for opportunities to exploit identified weaknesses. The SVR-associated actors are well-known in the cybersecurity world as APT29, Cozy Bear and The Dukes. The advisory recommended taking note of the techniques used by the SVR and to remediate any exploitable vulnerabilites immediately.

Meanwhile, Treasury also named the SVR (per above) and both the GRU and the FSB in their sanctions announcements. The SVR’s malevolent actions are directly associated with the SolarWinds supply chain attack. They also lifted red-team tools from FireEye. Additionally, the FSB has had their finger in the efforts to undermine the national infrastructure of both the Ukraine and Georgia. Finally, it is the FSB who directs the efforts to compromise and collect information against Russian journalists and dissidents, U.S. government personnel and “millions of private citizens around the world.” Interestingly, it is also the FSB who facilitated the advancement of a criminal hacking group, “previously designated as Evil Corp,” in support of targeted phishing attacks. The GRU, for their part, have seen a number of their personnel indicted in the United States, and are linked with ownership of the NotPetya and Olympic Destroyer malware, as well as “hack-and-leak” operations targeting the elections of both France and the United States.

Russian tech companies are identified by Treasury and sanctioned.

Treasury wasn’t done. They then went on to sanction multiple disinformation outlets, created by the Russian intelligence apparatus. These entities were identified as: 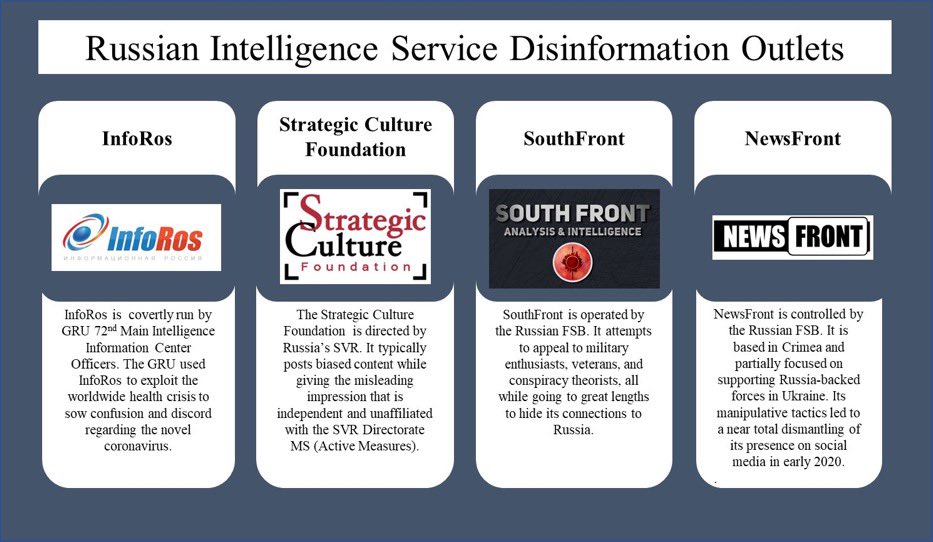 Yevgeniy Prigozhin’s Saint Petersburg, Russia-based Internet Research Agency is well known, but his other entities, including third parties hired to assist the efforts of Prigozhin’s efforts, are less so. The plethora of companies and individuals supporting Prigozhin-directed influence operations was impressive and far reaching. These identified entities, and the individuals associated with them are:

The FBI is offering a reward of $250,000 for information leading to the arrest of either Kilimnik or Prigozhin.