The NetWalker ransomware has been one of the most notorious ransomware families over the course of the past year, targeting organizations in the US and Europe including several healthcare organizations, despite several known threat actors publicly claiming to abstain from targeting such organizations due to COVID-19.

Worldwide Threat: NetWalker was employed in attacks across a variety of industries around the world, which caused great damage to many organizations.
Encrypting Mapped Drives: NetWalker encrypts shared network drives of adjacent machines on the network.
Double Extortion Operations: The threat actor behind NetWalker threatens to publicly reveal stolen data if payments are not made.
High Severity: The Cybereason Nocturnus Team assesses the threat level as HIGH given the destructive potential of the attacks.
Detected and Prevented: The Cybereason Defense Platform fully detects and prevents the NetWalker ransomware.

NetWalker ransomware first surfaced in August of 2019 (first dubbed Mailto). The group behind NetWalker operates a Ransomware-as-a-Service (RaaS) business model, which means they provide their infrastructure, tools and support in exchange for affiliate payment.

NetWalker operators have adopted the recent popular trend among ransomware purveyors:double extortion. In addition to demanding a ransom for the encrypted files, the group behind NetWalker steals sensitive data and files from its victims. The group extorts the victims by threatening to leak the stolen data unless ransom is paid. This technique renders the practice of data backups all but moot in combating the impact from ransomware attacks. Other known ransomware groups that leverage the double extortion paradigm are Maze, REvil, and DoppelPaymer.

The group behind NetWalker also maintains a blog on the Darknet where the group publishes information about its new victims alongside a countdown to the deadline for the ransom to be paid. If the time limit has expired and no ransom has been paid, the stolen data is published to this blog:

The targets of NetWalker belong to various sectors, among them educational facilities, local government, healthcare providers, and private companies. In June of 2020, three US universities were  targeted with the ransomware: the University of California San Francisco, Michigan State University, and Columbia College of Chicago.

Different government facilities were victims of NetWalker in Austria and Argentina in the past year as well. The attackers behind NetWalker do not pass on healthcare facilities as well – it has been reported that NetWalker has attacked Wilmington Surgical Associates and 13GB of data was stolen. Other healthcare facilities have been targeted as well, among them Crozer-Keystone Health System.

Other companies that fell victim include NameSouth, a US-based auto parts distributor, K-Electric, an electricity provider in Pakistan, and Toll Group Deliveries, an Australian transportation and logistics company.

The NetWalker ransomware has operators have been observed to using several different methods to infect an organization, these including the abuse of COVID-19 topics for phishing mails, weak credentials for Remote Desktop Protocol (RDP), exposed web applications and unpatched VPNs. According to a Federal Bureau of Investigation (FBI) Flash Alert, “two of the most common vulnerabilities exploited by actors using NetWalker are Pulse Secure VPN (CVE-2019-11510) and Telerik UI (CVE-2019-18935).”

For example, Cybereason observed an attack that started with a VBS file was attached to a phishing email with a COVID-19 lure content:

Upon execution, the script will drop the ransomware to “%temp%” and execute NetWalker:

In other cases, the ransomware was deployed following an interactive hacking operation using a ported-version of the ransomware payload that was injected to explorer.exe by a PowerShell script: 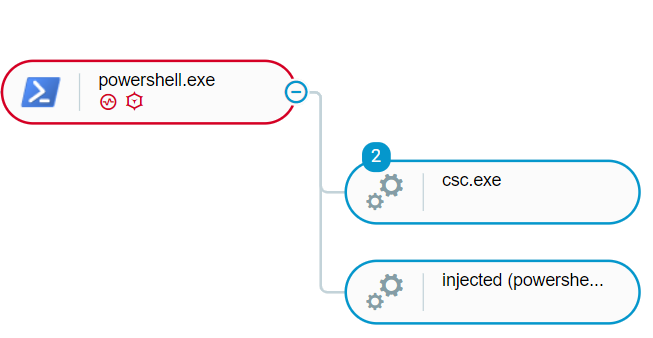 As a means of evasion, NetWalker does not directly declare its Windows API imported function in the import table. Instead, the ransomware dynamically resolves all of its API as a technique used to make static analysis harder. NetWalker compares a CRC32 hashed value of an API name to the exports of specific modules, then it builds a struct that holds the address of NetWalker’s API: 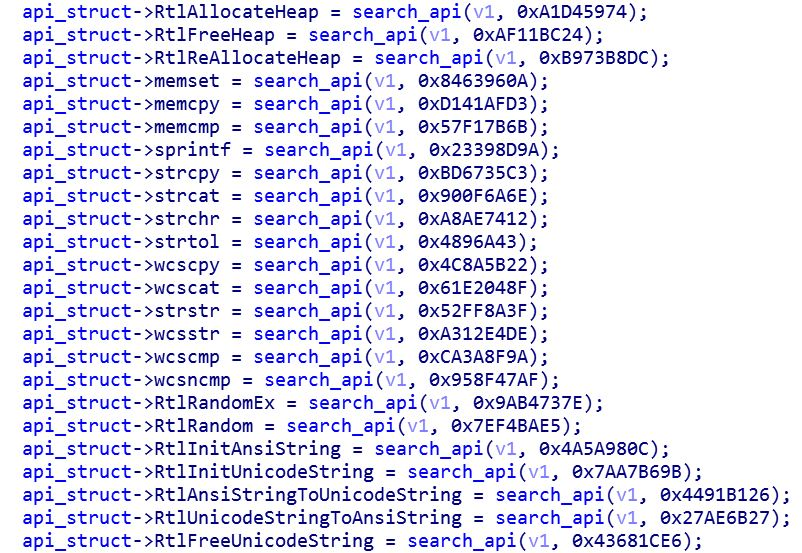 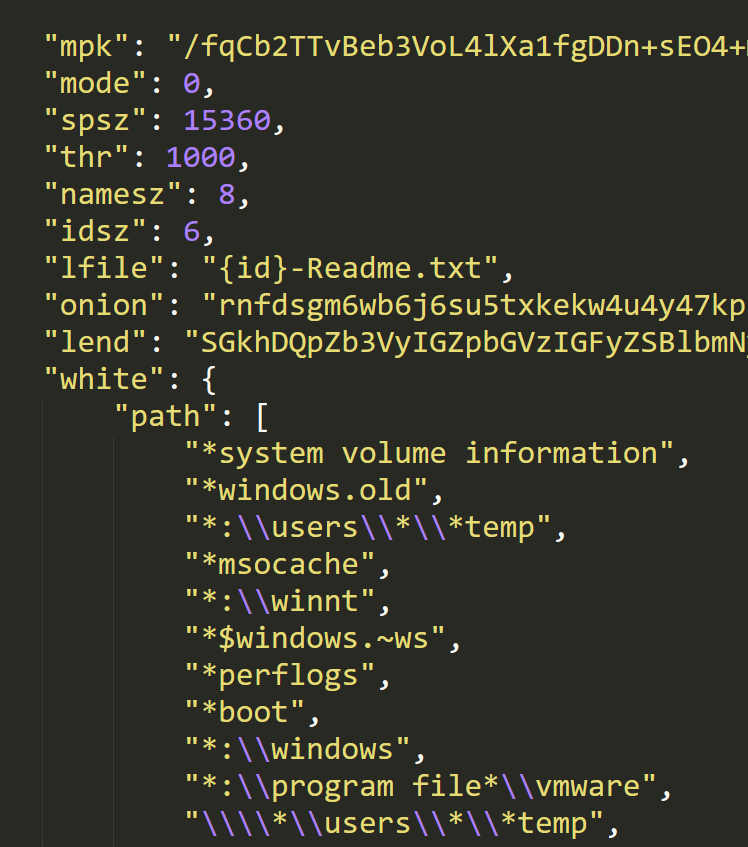 Before encrypting the victim’s files, NetWalker deletes the Windows’ Shadow Copies using the vssadmin.exe delete shadows /all /quiet command. On some variants, the command is spawned by the executable of the ransomware; on others, it is spawned by the PowerShell script which executes NetWalker:

Next, the ransomware will start the encryption stage. NetWalker ransomware checks for valid drives in the system using GetLogicalDriveStringsW. For network drives, the ransomware uses ImpersonateLoggedOnUser in an attempt to impersonate the context of the current user in order to access the remote drive. NetWalker then encrypts the files on the network and local drive using Salsa20 encryption. After the files are encrypted, the ransom note is placed. 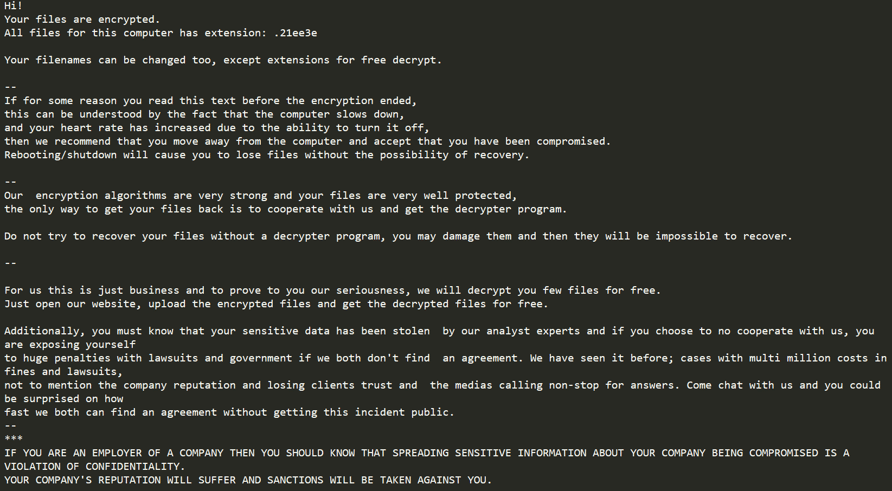 The Cybereason Defense Platform is able to prevent the execution of NetWalker Ransomware using multi-layer prevention that detects and blocks malware with threat intelligence, machine learning, and Next-Gen AV (NGAV) capabilities. Additionally, when the Anti-Ransomware feature is enabled, behavioral detection techniques in the platform are able to detect and prevent any attempt to encrypt files and generates a MalopTM:

Malop triggered due to the malicious activity

*** This is a Security Bloggers Network syndicated blog from Blog authored by Tom Fakterman. Read the original post at: http://www.cybereason.com/blog/cybereason-vs.-netwalker-ransomware