I had the great delight of reading Geoff White’s new book, “Crime Dot Com: From Viruses to Vote Rigging, How Hacking Went Global”, I thoroughly recommend it. The book is superbly researched and written, the author’s storytelling investigative journalist style not only lifts the lid on the murky underground world of cybercrime but shines a light on the ingenuity, persistence and ever-increasing global scale of sophisticated cybercriminal enterprises.

In Crime Dot Com Geoff takes the reader on a global historic tour of the shadowy cybercriminal underworld, from the humble beginnings with a rare interview with the elusive creator of the ‘Love Bug’ email worm, which caused havoc and panic back in 2000, right up to the modern-day alarming phenomenal of elections hacking by nation-state actors.
The book tells the tales of the most notorious hacks in recent history, explaining how they were successfully planned and orchestrated, all wonderfully written in a plain English style that my Luddite mother-in-law can understand.  Revealing why cybercrime is not just about the Hollywood stereotypical lone hacker, eagerly tapping away on a keyboard in the dark finding ingenious ways of exploiting IT systems. But is really about society obscured online communities of likeminded individuals with questionable moral compasses, collaborating, and ultimately exploiting innocent victims people out of billions of pounds.
The book covers the UK’s most notorious cyberattacks, such as the devasting 2017 WannaCry ransomware worm attack on the NHS, and the infamous TalkTalk hack carried out by teenage hackers.  Delving beyond the media ‘cyber scare’ headlines of the time, to bring the full story of what happened to the reader. The book also explores the rise and evolution of the Anonymous hacktivist culture and takes a deep dive into the less savoury aspects of criminal activities occurring on the dark web.
As you read about the history of cybercrime in this book, a kind of symbiosis between cybercriminals and nation-state hackers activities becomes apparent, from Russian law enforcement turning a blind-eye to Russia cybercriminals exploiting the West, to both the NSA’s and North Korea’s alleged involvement in creating the heinous WannaCry ransomware worm, and the UK cybercriminal that disabled that attack.  The growing number of physical world impacts caused by cyber-attacks are also probed in Crime Dot Com, so-called ‘kinetic warfare’. How sophisticated malware called Stuxnet, attributed by the media as United States military created, was unleashed with devastating effect to physically cripple an Iranian nuclear power station in a targeted attack, and why the latest cyber threat actors are targeting Britain’s energy network.
While this book is an easily digestible read for non-cyber security experts, the book provides cybersecurity professionals working on the frontline in defending organisations and citizens against cyber-attacks, with valuable insights and lessons to be learnt about their cyber adversaries and their techniques, particularly in understanding the motivations behind today’s common cyberattacks. 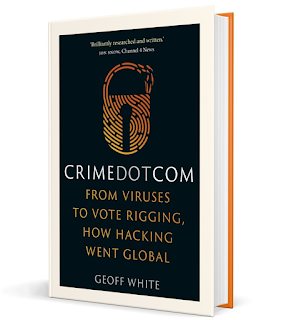 5 out of 5: A must-read for anyone with an interest in cybercrime
Recent Articles By Author

*** This is a Security Bloggers Network syndicated blog from IT Security Expert Blog authored by SecurityExpert. Read the original post at: http://feedproxy.google.com/~r/securityexpert/~3/WMJwf6odkPQ/book-review-crime-dot-com-from-viruses.html