Guest post by Adrian Taylor, Regional VP of Sales for A10 Networks

The Emotet trojan recently turned from a major cybersecurity threat to a laughingstock when its payloads were replaced by harmless animated GIFs. Taking advantage of a weakness in the way Emotet malware components were stored, white-hat hackers donned their vigilante masks and sabotaged the operations of the recently revived cyberthreat. While highly effective as well as somewhat humorous, the incident should not distract attention from two unavoidable truths. 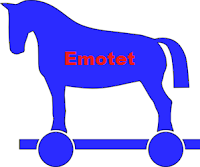 First, while the prank deactivated about a quarter of all Emotet malware payload downloads, the botnet remains a very real, ongoing threat and a prime vector for attacks such as ransomware. And second, relying on one-off operations by whimsical vigilantes is hardly a sustainable security strategy. To keep the remaining active Emotet botnets—and countless other cyber threats—out of their environment, organisations need to rely on more robust and reliable measures based on SSL interception (SSL inspection) and SSL decryption.

History of Emotet and the threat it presents
First identified in 2014, version one of Emotet was designed to steal bank account details by intercepting internet traffic. A short time after, a new version of the software was detected. This version, dubbed Emotet version two, came packaged with several modules, including a money transfer system, malspam module, and a banking module that targeted German and Austrian banks. Last year, we saw reports of a botnet-driven spam campaign targeting German, Polish, Italian, and English victims with craftily worded subject lines like “Payment Remittance Advice” and “Overdue Invoice.” Opening the infected Microsoft Word document initiates a macro, which in turn downloads Emotet from compromised WordPress sites.

After a relative quiet start to 2020, the Emotet trojan resurfaced suddenly with a surge of activity in mid-July. This time around, the botnet’s reign of terror took an unexpected turn when the payloads its operators had stored on – poorly secured WordPress sites – were replaced with a series of popular GIFs. Instead of being alerted of a successful cyberattack, the respective targets received nothing more alarming than an image of Blink 182, James Franco, or Hackerman.

Whilst this is all in good fun, the question remains: what if the white hats had left their masks in the drawer instead of taking on the Emotet trojan? And what about the countless other malware attacks that continue unimpeded, delivering their payloads as intended?

A view into the encryption blind spot with SSL interception (SSL inspection)
Malware attacks such as Emotet often take advantage of a fundamental flaw in internet security. To protect data, most companies routinely rely on SSL encryption or TLS encryption. This practice is highly effective for preventing spoofing, man-in-the-middle attacks, and other common exploits from compromising data security and privacy. Unfortunately, it also creates an ideal hiding place for hackers. To security devices inspecting inbound communications for threats, encrypted traffic appears as gibberish—including malware. In fact, more than half of the malware attacks seen today are using some form of encryption. As a result, the SSL encryption blind spot ends up being a major hole in the organisation’s defence strategy.

The most obvious way to address this problem would be to decrypt traffic as it arrives to enable SSL inspection before passing it along to its destination within the organisation—an approach known as SSL interception. But here too, problems arise. For one thing, some types of data are not allowed to be decrypted, such as the records of medical patients governed by privacy standards like HIPAA, making across-the-board SSL decryption unsuitable. And for any kind of traffic, SSL decryption can greatly degrade the performance of security devices while increasing network latency, bottlenecks, cost, and complexity. Multiply these impacts by the number of components in the typical enterprise security stack—DLP, antivirus, firewall, IPS, and IDS—and the problem becomes clear.

How efficient SSL inspection saves the day
With many organisations relying on distributed per-hop SSL decryption. A single SSL inspection solution can provide the best course of action by decrypting traffic across all TCP ports and advanced protocols like SSH, STARTTLS, XMPP, SMTP and POP3. Also, this solution helps provide network traffic visibility to all security devices, including inline, out-of-band and ICAP-enabled devices.

Whilst we should celebrate the work of the white hats who restrained Emotet, it is not every day that a lethal cyber threat becomes a matter of humour. But having had a good laugh at their expense, we should turn our attention to making sure that attacks like Emotet have no way to succeed in the future—without the need to count on vigilante justice – this is where SSL inspection can really save the day.

*** This is a Security Bloggers Network syndicated blog from IT Security Expert Blog authored by SecurityExpert. Read the original post at: http://feedproxy.google.com/~r/securityexpert/~3/JiCjvn_XTHs/beating-emotet-malware-with-ssl.html

YT$AW: FBI Cleans Up Exchange Servers, NSA Tips Microsoft 4 More Bugs
Majority of Mobile App Vulnerabilities From Open Source Code
Broadcom to Migrate Security Platforms to Google Cloud
In the World of IoT Security, Lock Every Door
The Need for a Cybersecurity Protection Agency
Mayhem for API ❤️ GitHub: Seamless DevSecOps for your REST APIs
What the 2021 OSSRA report tells us about the state of open source in commercial software
Damaging Linux & Mac Malware Bundled within Browserify npm Brandjack Attempt
Radware is named a Customer’s Choice in the 2021 Gartner Peer Insights
The Week in Breach News: 04/07/21 – 04/13/21