Most of the civilized world years ago shifted to requiring computer chips in payment cards that make it far more expensive and difficult for thieves to clone and use them for fraud. One notable exception is the United States, which is still lurching toward this goal. Here’s a look at the havoc that lag has wrought, as seen through the purchasing patterns at one of the underground’s biggest stolen card shops that was hacked last year.

In October 2019, someone hacked BriansClub, a popular stolen card bazaar that uses this author’s likeness and name in its marketing. Whoever compromised the shop siphoned data on millions of card accounts that were acquired over four years through various illicit means from legitimate, hacked businesses around the globe — but mostly from U.S. merchants. That database was leaked to KrebsOnSecurity, which in turn shared it with multiple sources that help fight payment card fraud.

An ad for BriansClub has been using my name and likeness for years to peddle millions of stolen credit cards.

Among the recipients was Damon McCoy, an associate professor at New York University’s Tandon School of Engineering [full disclosure: NYU has been a longtime advertiser on this blog]. McCoy’s work in probing the credit card systems used by some of the world’s biggest purveyors of junk email greatly enriched the data that informed my 2014 book Spam Nation, and I wanted to make sure he and his colleagues had a crack at the BriansClub data as well.

McCoy and fellow NYU researchers found BriansClub earned close to $104 million in gross revenue from 2015 to early 2019, and listed over 19 million unique card numbers for sale. Around 97% of the inventory was stolen magnetic stripe data, commonly used to produce counterfeit cards for in-person payments.

“What surprised me most was there are still a lot of people swiping their cards for transactions here,” McCoy said.

In 2015, the major credit card associations instituted new rules that made it riskier and potentially more expensive for U.S. merchants to continue allowing customers to swipe the stripe instead of dip the chip. Complicating this transition was the fact that many card-issuing U.S. banks took years to replace their customer card stocks with chip-enabled cards, and countless retailers dragged their feet in updating their payment terminals to accept chip-based cards.

Indeed, three years later the U.S. Federal Reserve estimated (PDF) that 43.3 percent of in-person card payments were still being processed by reading the magnetic stripe instead of the chip. This might not have been such a big deal if payment terminals at many of those merchants weren’t also compromised with malicious software that copied the data when customers swiped their cards.

Following the 2015 liability shift, more than 84 percent of the non-chip cards advertised by BriansClub were sold, versus just 35 percent of chip-based cards during the same time period.

“All cards without a chip were in much higher demand,” McCoy said.

Perhaps surprisingly, McCoy and his fellow NYU researchers found BriansClub customers purchased only 40% of its overall inventory. But what they did buy supports the notion that crooks generally gravitate toward cards issued by financial institutions that are perceived as having fewer or more lax protections against fraud. 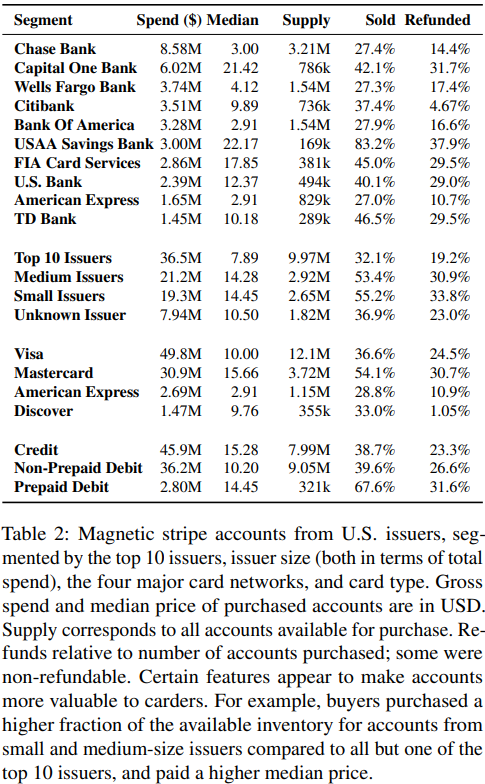 While the top 10 largest card issuers in the United States accounted for nearly half of the accounts put up for sale at BriansClub, only 32 percent of those accounts were sold — and at a roughly half the median price of those issued by small- and medium-sized institutions.

In contrast, more than half of the stolen cards issued by small and medium-sized institutions were purchased from the fraud shop. This was true even though by the end of 2018, 91 percent of cards for sale from medium-sized institutions were chip-based, and 89 percent from smaller banks and credit unions. Nearly all cards issued by the top ten largest U.S. card issuers (98 percent) were chip-enabled by that time.

“For whatever reason, those regions were perceived as having lower anti-fraud systems or those that were not as effective,” McCoy said.

Cards compromised from merchants in South Carolina were in especially high demand, with fraudsters willing to spend twice as much on those cards per capita than any other state — roughly $1 per resident.

That sales trend also was reflected in the support tickets filed by BriansClub customers, who frequently were informed that cards tied to the southeastern United States were less likely to be restricted for use outside of the region.

McCoy said the lack of region locking also made stolen cards issued by banks in China something of a hot commodity, even though these cards demanded much higher prices (often more than $100 per account): The NYU researchers found virtually all available Chinese cards were sold soon after they were put up for sale. Ditto for the relatively few corporate and business cards for sale.

A lack of region locks may also have caused card thieves to gravitate toward buying up as many cards as they could from USAA, a savings bank that caters to active and former military service members and their immediate families. More than 83 percent of the available USAA cards were sold between 2015 and 2019, the researchers found.

Although Visa cards made up more than half of accounts put up for sale (12.1 million), just 36 percent were sold. MasterCards were the second most-plentiful (3.72 million), and yet more than 54 percent of them sold.

American Express and Discover, which unlike Visa and MasterCard are so-called “closed loop” networks that do not rely on third-party financial institutions to issue cards and manage fraud on them, saw 28.8 percent and 33 percent of their stolen cards purchased, respectively.

Some people concerned about the scourge of debit and credit card fraud opt to purchase prepaid cards, which generally enjoy the same cardholder protections against fraudulent transactions. But the NYU team found compromised prepaid accounts were purchased at a far higher rate than regular debit and credit cards.

Several factors may be at play here. For starters, relatively few prepaid cards for sale were chip-based. McCoy said there was some data to suggest many of these prepaids were issued to people collecting government benefits such as unemployment and food assistance. Specifically, the “service code” information associated with these prepaid cards indicated that many were restricted for use at places like liquor stores and casinos.

“This was a pretty sad finding, because if you don’t have a bank this is probably how you get your wages,” McCoy said. “These cards were disproportionately targeted. The unfortunate and striking thing was the sheer demand and lack of [chip] support for prepaid cards. Also, these cards were likely more attractive to fraudsters because [the issuer’s] anti-fraud countermeasures weren’t up to par, possibly because they know less about their customers and their typical purchase history.”

The NYU researchers estimate BriansClub pulled in approximately $24 million in profit over four years. They calculated this number by taking the more than $100 million in total sales and subtracting commissions paid to card thieves who supplied the shop with fresh goods, as well as the price of cards that were refunded to buyers. BriansClub, like many other stolen card shops, offers refunds on certain purchases if the buyer can demonstrate the cards were no longer active at the time of purchase.

On average, BriansClub paid suppliers commissions ranging from 50-60 percent of the total value of the cards sold. Card-not-present (CNP) accounts — or those stolen from online retailers and purchased by fraudsters principally for use in defrauding other online merchants — fetched a much steeper supplier commission of 80 percent, but mainly because these cards were in such high demand and low supply.

The NYU team found card-not-present sales accounted for just 7 percent of all revenue, even though card thieves clearly now have much higher incentives to target online merchants.

A story here last year observed that this exact supply and demand tug-of-war had helped to significantly increase prices for card-not-present accounts across multiple stolen credit card shops in the underground. Not long ago, the price of CNP accounts was less than half that of card-present accounts. These days, those prices are roughly equivalent.

One likely reason for that shift is the United States is the last of the G20 nations to fully transition to more secure chip-based payment cards. In every other country that long ago made the chip card transition, they saw the same dynamic: As they made it harder for thieves to counterfeit physical cards, the fraud didn’t go away but instead shifted to online merchants.

The same progression is happening now in the United States, only the demand for stolen CNP data still far outstrips supply. Which might explain why we’ve seen such a huge uptick over the past few years in e-commerce sites getting hacked.

“Everyone points to this displacement effect from card-present to card-not-present fraud,” McCoy said. “But if the supply isn’t there, there’s only so much room for that displacement to occur.”

No doubt the epidemic of card fraud has benefited mightily from hacked retail chains — particularly restaurants — that still allow customers to swipe chip-based cards. But as we’ll see in a post to be published tomorrow, new research suggests thieves are starting to deploy ingenious methods for converting card data from certain compromised chip-based transactions into physical counterfeit cards.

A copy of the NYU research paper is available here (PDF).

*** This is a Security Bloggers Network syndicated blog from Krebs on Security authored by BrianKrebs. Read the original post at: https://krebsonsecurity.com/2020/07/heres-why-credit-card-fraud-is-still-a-thing/