The Coveware ransomware marketplace report aggregates observed trends from enterprise ransomware incidents in Q1 of 2020. During the first quarter of 2020 ransomware threat actors took advantage of the economic and workplace disruption caused by the COVID-19 outbreak. Spam attacks related to the outbreak surged and seldom used ‘work-from-home’ network configurations led to increased ransomware attacks across the board. Some threat actor groups continued attacking healthcare organizations, while others refused to target them. Our report shows victim demographics and resolution metrics based on actual ransomware cases handled by the Coveware Incident Response team.

The Average Ransom Payment has Increased by 33%

Sodinokibi, Ryuk and Phobos remain the most common types of ransomware, Mamba follows shortly after

The 3 most common ransomware types remained the same between Q4 2019 and Q1 2020.  Towards the end of Q1 the prevalence of Ryuk and other Hermes variants began to dissipate. The reason for this change is not currently understood.However, the change in prevalence was preceded by observable changes in threat actor behavior.

What are the Most Common Ransomware Attack Vectors? 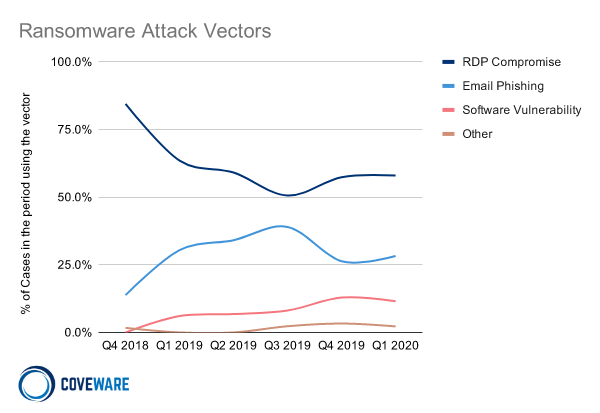 Poorly secured Remote Desktop Protocol (RDP) access points continued to be the most common attack vector.  RDP credentials to an enterprise IP address can be purchased for as little as $20 on dark marketplaces. Combined with cheap ransomware kits, the costs to carry out attacks on machines with open RDP were too economically lucrative for criminals to resist. Until the economics of carrying out ransomware balance (by either bringing the monetization success rates down or by making attacks prohibitively expensive) ransomware and cyber extortion will continue to gain prevalence.

Comparing the Top 3 Types of Ransomware – Sodinokibi, Ryuk and Phobos

In Q1 2020, the top three most prevalent types of ransomware remained the same as in Q4. Ryuk prevalence reduced dramatically as the quarter came to a close. We expect that the market share rankings will change substantially in Q2 2020, as a number of new variants have become much more active.

Comparing the Top Three Types of Ransomware by Attack Vector

The top three ransom variants employed different techniques to gain initial access to their victims. The initial access techniques tend to reflect the sophistication of the threat actor behind the attack. For example, Phobos is a very common ransomware-as-a-service variant with virtually no barriers to becoming a Phobos affiliate. Accordingly, the technical  sophistication of the threat actors tends to be relatively low. These attacks typically involve purchasing previously acquired RDP credentials on a dark market.

On the other end of the spectrum, Ryuk ransomware typically relies on integrations with sophisticated spear phishing and banking trojan integrations, such as Trickbot / Emotet, that enter organizations via a subtle and strategic attack vector. Sodinokibi combined both a RaaS distribution model and sophisticated initial breach techniques. Sodinokibi used several regular strategies to gain access to their targets of choice which tend to be IT managed service providers.

Another distinguishing element of the three most prevalent ransomware types was the size of the target organization. In Q1, Phobos went slightly up market and successfully attacked a few larger enterprises, even though the median size of a Phobos victim remained small.  The Ryuk groups shifted their focus slightly down market as the average size of their victims fell by nearly a third.  Sodinokibi shifted some of their attention from small MSPs to attack select large enterprises. The change reflects their ability to employ a variety of exploits. In Q1 2020 Coveware observed Sodinokibi take advantage of several VPN vulnerabilities that were common among large enterprises.

Comparing the Top Three Types of Ransomware by Ransom Payment 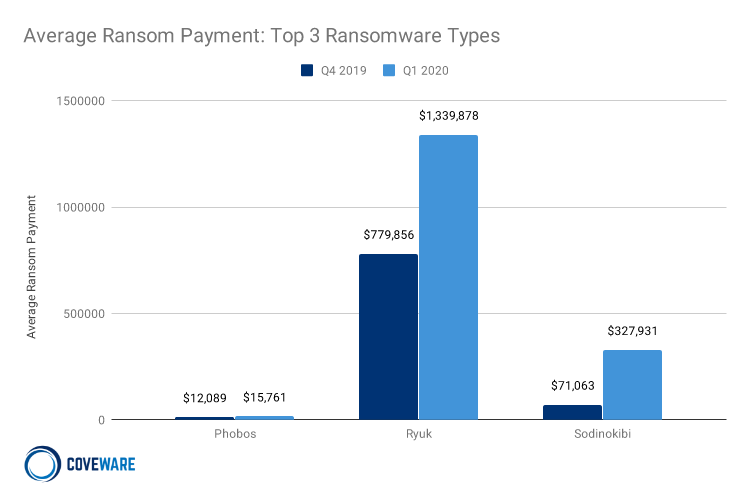 Payment amounts between ransomware variants also reflect how attack patterns and targets changed. Phobos stayed relatively consistent, as the variant typically only targeted small companies that had open RDP.  Ryuk amounts increased, despite a decrease in the size of targeted companies. The Ryuk amounts increased shortly after the new year, with both higher initial and final demands from their victims.

Sodinokibi ransom payments were more broadly distributed, representative of their broader victim demographic. A single large organization may have a million dollar ransom demand. Other times Sodinokibi targeted an MSP’s clients and tried to extort each individual end client for $5-$10k.

Small and medium sized professional service firms such as law firms, IT managed service providers and CPA firms continued to be the largest industry subset targeted by ransomware in Q1 2020.

Public sector organizations also jumped in prevalence, predominantly as a result of the COVID-19 outbreak. The subset of public organizations most targeted was public schools. Typically, school systems are targeted over the summer. The timing is designed to force the company to pay before school begins. The rotation into targeting schools in March was likely precipitated by the COVID-19 pandemic which forced most school systems to rapidly offer remote learning. The hasty switch caused many schools to leave themselves vulnerable to attack, and ransomware actors took full advantage during Q1.  Public sector entities were 12% of attacks in Q1 and almost 50% of those were schools with the other half a mixture of state and local organizations.

How Much Data Was Recovered After Paying a Ransom?

When a ransomware victim is forced to pay a ransom, Coveware tracks two primary metrics to measure the outcome:

How Often Was a Decryption Tool Delivered After Paying a Ransom?

In Q1 2020, the payment success rate rose to 99%. Coveware saw few payment defaults in Q1. That said, our rate may not reflect the average ransomware victim for two reasons. First, Coveware has been successful in counselling victims of ransomware not to engage with threat actors that have bad track records of delivering decryption tools. Our ability to forecast a default kept victims from paying a ‘dishonest’ criminal, but also increased the success rate –  no payment is made, no default is possible.

Second, because Coveware only works with businesses, we do not record case outcomes for individuals. Our anecdotal review suggests that individuals have generally worse outcomes when dealing with ransomware. 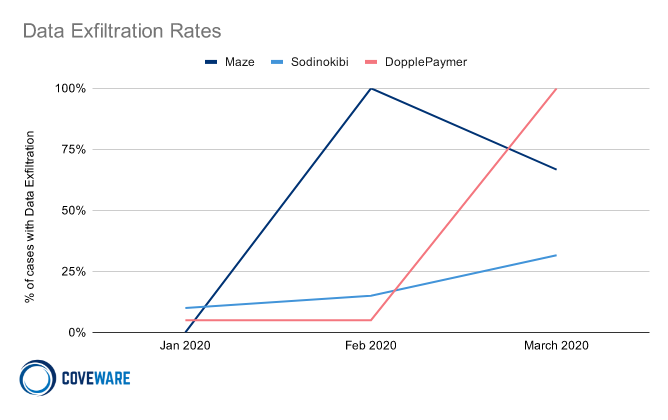 Data exfiltration, where data is downloaded from victim computers and is threatened to be released publicly, became a prevalent tactic during ransomware attacks in Q1 2020. This was a big change from the previous quarter where it was virtually non-existent.

By the end of Q1 2020 the following variants regularly exfiltrated data and threatened public release as part of a ransomware attack:

Coveware expects data exfiltration threats to increase in 2020 as more threat actor groups try to raise conversion rates on their attacks. Some groups created public ‘news’ boards to publicly post stolen data of clients that don’t pay. Others resorted to sending the stolen data to customers, reporters or other recipients to damage the victim’s reputation.

The shift to ‘Big Game Hunting’ stabilized as the average size organizations impacted by ransomware leveled off over the past 3 quarters. However, it is important to note that while large companies are targeted, ransomware remains proportionally a small business problem. 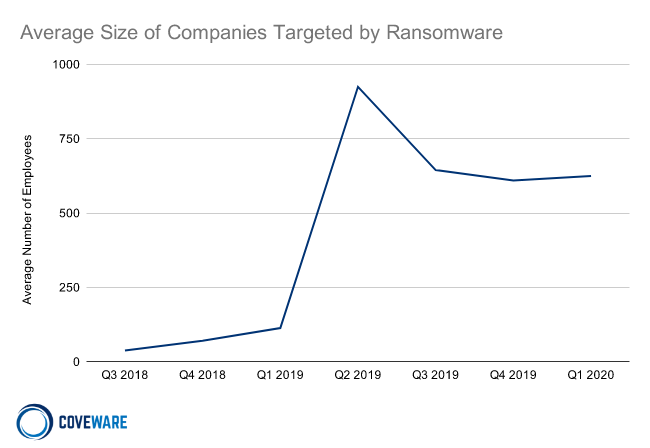 The median company size is still substantially lower at 62 employees, a reminder of how large enterprises can pull averages up. 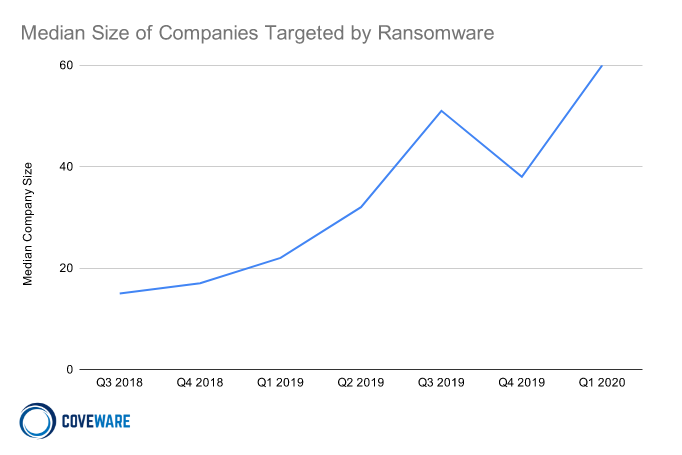 Costs of Ransomware Attacks in Q1 2020

The total cost of a ransomware attack is a function of the severity and duration of the attack. Financial costs include the immediate remediation of a network and its hardware.  Costs also include lost revenue and potential brand damage if business interruption is severe enough. In Q1, ransomware actors combined the exfiltration of data from victims into their attacks. This data exfiltration is intended to force victims of ransomware into paying, even if they were able to recover lost data from backups.

Average days of downtime leveled off in Q1 2020 at 15 days per ransomware attack, down slightly from Q4 2019. Even though the average stabilized, 2 weeks of impaired productivity is a substantial amount of time for any business.  Business interruption costs from downtime are the largest pain point for companies impacted by a ransomware attack. An organization’s ability to persevere through extended disruption depends on their size and industry.

Hospitals are most acutely at risk of downtime due to the potential impact on patient care. It is worth noting that some threat actors made public announcements that they would not target healthcare organizations. Other ransomware variants continued to target hospitals, including Ryuk, DopplePaymer and Defray777. 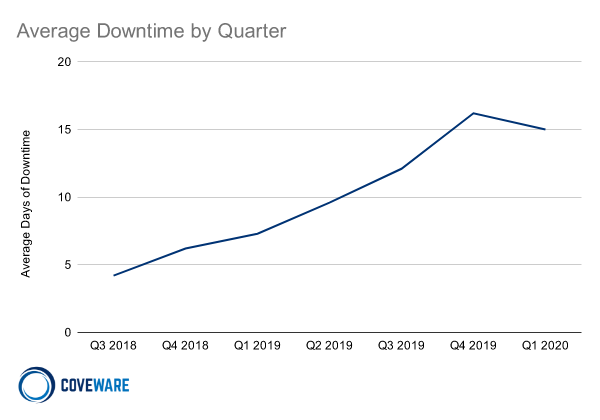 Bitcoin continued to be the cryptocurrency of choice for cyber extortion. This was principally due to the relative ease with which Bitcoin can be procured when compared to more esoteric types of cryptocurrency. In our analysis of Bitcoin payments, it is clear that Bitcoin is typically swapped into privacy coins like Monero or Dash to reduce traceability of the funds before the cryptocurrencies are washed back through to fiat currency. Some threat actor groups are now making their initial demands in Monero to reduce traceability earlier in the laundering cycle.

*** This is a Security Bloggers Network syndicated blog from Blog | Latest Ransomware News and Trends | Coveware authored by Bill Siegel. Read the original post at: https://www.coveware.com/blog/q1-2020-ransomware-marketplace-report