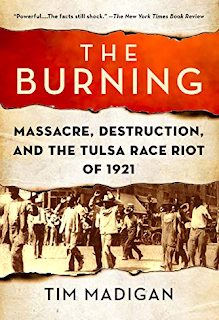 I hate the the KKK.

I know, saying that out loud is not that brave. How can anybody disagree with the notion that, according to the Equal Justice Initiative, this American domestic terrorist organization was either directly or indirectly responsible for the murder of over 4,400 American citizens between the end of the Civil War and the end of WWII by the particularly gruesome method of racial terror lynchings? Just to put that number into perspective. If we counted the dead for these racial terror lynchings the same way we counted the dead for American war efforts, The KKK would be responsible for the 5th largest American body count far exceeding the dead in the Spanish-American War (2,446) and the civilians killed on 9/11 (2,997) but coming in just behind the dead in the Revolutionary War (4,435.) And yet, most non-black Americans don’t know this or if they do, don’t care. It is definitely not taught in our schools. Even last year, I was definitely in that category of white Americans who knew that the KKK was bad but didn’t understand the extent. And then I watched the excellent HBO show called “Watchman.”
The opening scene depicts the 1921 race riots in Tulsa Oklahoma that wiped out the thriving black community there and killed, according to the City of Tulsa’s Report of the Race Riot Commission in the year 2000, between 100 and 300 people and made homeless of some 8,000 people more. In the HBO show, the whites used three WWI bi-planes to drop bombs on the black side of town. When I saw that, I said to myself, “that must be an exaggeration to give the episode some pop. That can’t be true.”
It is totally true.
In the commentary, the HBO producers mentioned that they lifted the idea of the bi-plane bombings from this book: “The Burning: Massacre, Destruction, and the Tulsa Race Riot of 1921.” Madigan did extensive research on the survivors in order to tell the stories of the lead up to the event, the actual race riot, the efforts of the city to cover it up after, and finally, the efforts to excavate the event from secrecy in the 70s and 80s. When another domestic terrorist organization bombed the Oklahoma City courthouse in 1995 that killed 195 people, local papers reported the event as the biggest singular death count from domestic terrorism ever. No state media outlet reported the Tulsa Race riot numbers.
And Tulsa wasn’t isolated either. During the same period, there were 17 other race riots with similar death counts from big cities like New York, Detroit, and New Orleans but also smaller towns like Memphis (Tennessee), Clinton (Mississippi), and Virden (Illinois). In most, tensions between the races were tense and something small ignited the conflagration. But in Wilmington (Delaware) race riot, the whites organized a coup of the city government in conjunction with the violence they orchestrated. After it was over, the U.S. national government looked the other way.
The one idea coming out of the City of Tulsa’s Report of the Race Riot Commission in the year 2000 is the idea of reparations paid to the riot’s victims. Nothing more than symbolic nods has been done in that direction since the report came out, but the idea of reparations sets up the HBO show: “Watchman.”
But, as I said, I hate the KKK.
So, I recommend this book for no other reason than Madigan tells the stories of the survivors before they all passed away. Their stories deserve to be heard.

*** This is a Security Bloggers Network syndicated blog from Terebrate authored by Rick. Read the original post at: https://terebrate.blogspot.com/2020/04/book-review-burning-massacre.html