Fortinet today launched an initiative to integrate firewalls and software-defined wide area networks (SD-WANs) to make it easier to secure a branch office.

The Fortinet SD-Branch portfolio consists of the company’s firewall that has been extended to include an SD-WAN alongside Fortinet switches, access points and network access control (NAC) software that all ties into the same network fabric.

At the same time, Fortinet has extended the reach of its firewalls to add support for wireless networks based on the WiFi 6 standard, also known as 802.11ax.

Version 8.6 of FortiNAC increases anomaly detection via traffic scanning by leveraging FortiGate firewalls as a sensor, with no additional hardware required at the branch, according to the company. That capability extends the ability of Fortinet’s NAC software to provide automatic discovery, classification and security of IoT devices as they enter the network. 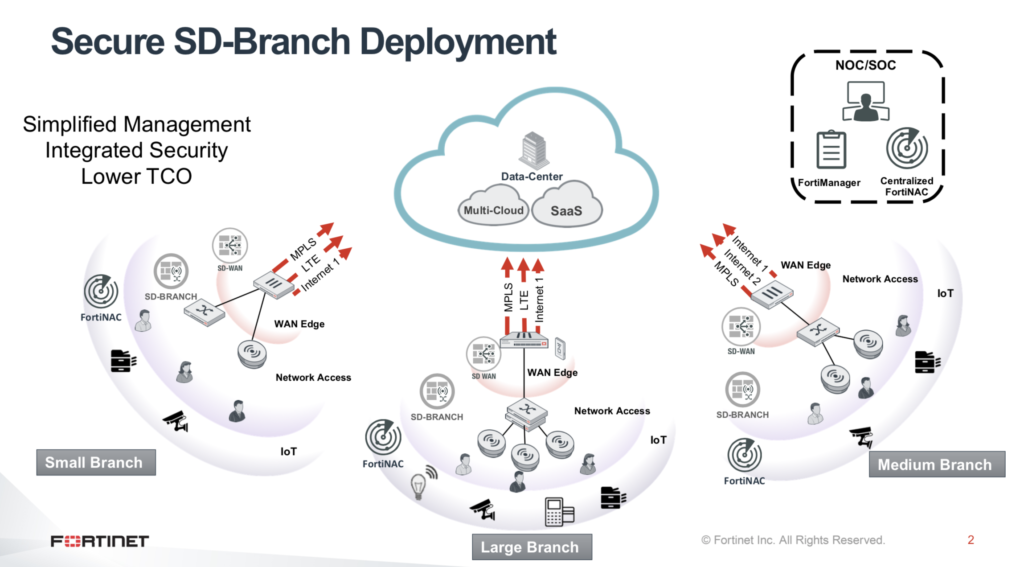 Peter Newton, senior director for products and solutions at Fortinet, said that while interest in SD-WANs to lower networking costs is running high, many of those same organizations are becoming weary of having to integrate separate security products and services to secure those SD-WANs. The Fortinet approach provides an integrated platform that comes with a built-in firewall capability, he said.

The Fortinet platform also enables organizations to apply security policies to any device connected in a branch office, Newton added. Today most cybersecurity teams have limited visibility into branch offices, and employees often connect all manner of devices to the corporate network.

Newton also said Fortinet eliminates the need to license dedicated traffic sensors, in addition to providing a single-user interface through which the configuration of a software-defined branch office can be automated.

Competition across the SD-WAN sector is already fierce. Vendors ranging from providers of standalone SD-WAN appliances to telecommunication carriers are all trying to carve out space in one of the fastest growing segments of IT. Providers of firewalls such as Fortinet have now taken note of that growth as well, and many of them are moving to provide SD-WAN capabilities within their firewalls to differentiate themselves. Longer term, it’s also apparent that the management of SD-WANs and Wi-Fi networks is also starting to converge, all of which need to be secured.

The challenge many vendors will face, however, is the fact that the individuals who decide which SD-WAN platform to use are not always the same at the people who are responsible for cybersecurity. Newton noted that although the conversation may start with networking professionals, cybersecurity teams inevitably become part of the conversation.

The discussion tends to go a lot smoother when the networking team is prepared to address the concerns of the cybersecurity teams. Less clear at the moment is the degree to which all this convergence at the branch office will drive a wave of mergers and acquisitions among all the vendors targeting the same opportunity.