Aruba Networks, a unit of Hewlett-Packard Enterprise (HPE), this week announced it has added an ability to automatically fingerprint devices being attached to a network to enable cybersecurity teams to apply policies to those devices based on how closely they resemble similar devices.

Announced at Aruba’s Atmosphere 2019 conference, the capability discovers devices using a combination of deep-packet inspection technologies and machine learning algorithms embedded in Aruba ClearPass Device Insight, which runs as a cloud service. The analytics surfaced by that offering then can be used to inform Aruba ClearPass Policy Manager and the segmentation capabilities embedded with Aruba networking hardware to determine how specific policies should be applied to an unknown device. 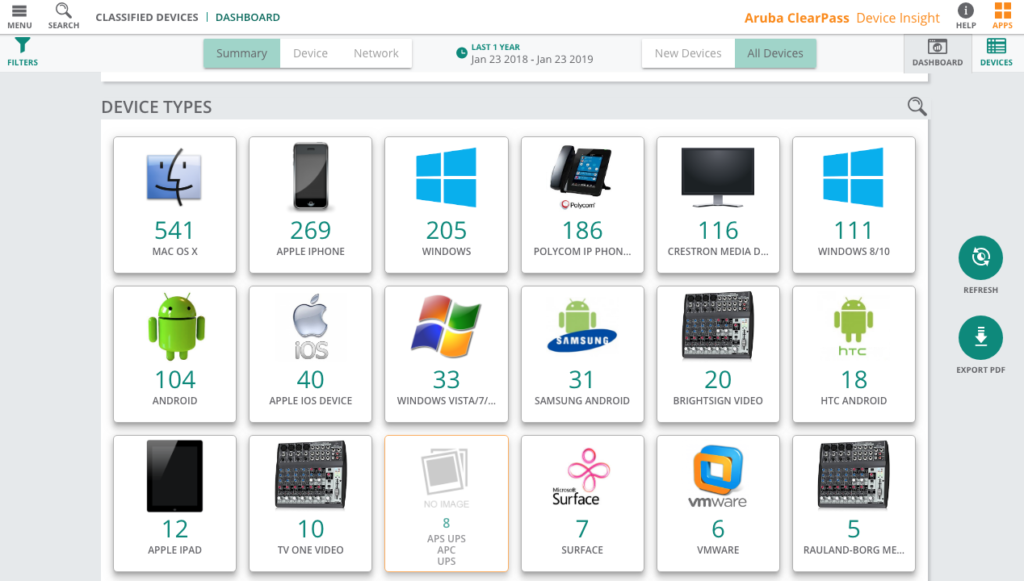 Paul Kaspian, senior product and solutions marketing manager for security at Aruba, said the ability to fingerprint devices such as bar code scanners in the age of the internet of things (IoT) is becoming critical because cybersecurity teams are not always informed before new devices are added to the network. Many of those devices are “exotic” in the sense that nothing like them has been attached to the network before, he added. The Aruba approach makes it possible to enforce cybersecurity policies at a base level. At the same time, the machine learning algorithms embedded in Aruba ClearPass Device Insight also become better at recognizing specific devices over time, noted Kaspian.

Aruba this week also introduced higher-performance wireless access points based on the 802.11ax standard, also known as Wi-Fi 6. Those access points make it possible to support a much larger number of mobile and IoT device per access point. Those access points also support Bluetooth 5 and Zigbee protocols, which Aruba claims makes them compatible with 74 percent of all the devices attached to an IoT network today.

Kaspian said the security capabilities Aruba is adding build on technologies the company gained by acquiring Rasa Networks, a provider of network performance analytics tools, and Niara, a provider of security analytics software. Both those companies made use of machine learning algorithms to inject artificial intelligence (AI) into identify devices and potential vulnerabilities.

Of course, it’s still not 100 percent clear just who is in charge of IoT security these days. A recent global survey of 4,000 IT and security professionals conducted by The Ponemon Institute on behalf of Aruba found that only 33 percent said IoT cybersecurity rested with the CIO. No other executive or functional group achieved response totals above 20 percent, and 15 percent of the survey respondents said there was no function.

Aruba, of course, is hoping to leverage many of the relationships HPE has in sectors such as manufacturing to drive adoption of its approach to IoT cybersecurity. Regardless of who makes the final decision, however, the number and types of devices being attached to networks is increasing exponentially. As that trend continues, so, too, does the size of the attack surface that cybersecurity professionals are being expected to defend.

FCC Proposes Stricter Regulations for Data Breach Disclosure
WEF Report: Cyber Risks Pose Global Threats
Teachable Moment: An Insider Threat on Your Team
Multi-Cloud Security in 2022
Deloitte Extends Managed Security Service to Include XDR
5 Myths About Interning in Cybersecurity
How to Back Up and Restore Your Linux System Using the Rsync Utility
Difference Between Cybersecurity and Cloud Security
Why Cloud is The Booster Shot For Fintech?
Bob Saget and open source license compliance