Policing in the 21st Century is obviously changing rapidly. New technological advances are fundamentally changing the way in which police forces and related government entities can track, locate, and collect evidence.

Two game changing technologies – working together – perhaps underpin the greatest tool for policing the world over. The combination of high-resolution digital video capture and facial recognition. Both sit at the crux of future policing and bring new societal change.

Projecting forward, what could the next decade or two hold?

It’s easy to get in to the realm of Science Fiction and dystopian futures, but when I consider some of the social impact (and “opportunities”) such technologies can bring, it naturally feels like the premise for several short stories.

One: Peaking Under Facial Obfuscation
As I watch news of the “Yellow Vest” riots in Paris, it is inevitable that high-resolution digital video capture of protesters – combined with facial recognition – will mean that many group protest actions will become individually attributable. While the face of the perpetrator may not initially be tied to an identity, a portfolio of digital captures can be compiled and (at some future date) associated with the named individual. 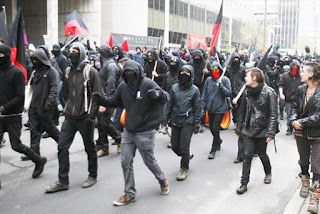 New technologies in the realm of full-color night-vision video capture and advanced infrared heat-based body and face mapping lie the basis of radically better tools for associating captured maleficence to an individual. Combined with the work being done with infrared facial recognition, and we’ll soon find that scarfs, balaclavas, or even helmets will cease to protect the identity of the perpetrator.

Two: Perpetual Digital Trail
Many large cities are approaching the point that it is impossible to stand in any public space or thoroughfare and not be captured by at least one video camera. Capitalizing on this, many metropolitan police forces are already able to real-time track a surveilled individual or entity through their networked cameras. In addition, some police forces have already combined such capabilities with facial recognition to quickly spot wanted individuals or suspects in crowds and track their movements across cameras in real-time.

We can expect the density and prevalence of cameras to grow. We can also expect that the video captured from these cameras to increasingly move to the cloud and be retained indefinitely. The AI tooling today already enables us to intelligently stitch together all the video content and construct a historical trail for any person or physical entity.

When combined with (One), it means that in the near future police forces could track (both forward and reverse in time) each suspect – identifying not only the history of travel and events preceding the crime, but also their origination (e.g. home) address… and from there, arrive at an identity conclusion. Imagine doing this for thousands of protesters simultaneously. Obviously, such a capability would also facilitate the capture of facial images of the suspect before they donned any masks or facial obfuscation tools they used during the protest or crime.

Three: Inferring Pending Harm and Stress
As digital video cameras radically increase their capture resolution – moving from an average of 640×480 to 3096×2160 (4k Ultra HD) and beyond over the coming years; facial recognition accuracy will obviously improve, but we can expect other personal traits and characteristics to be accurately inferred.

Studies of human movement and tooling for life-like movements in digital movies naturally lend to the ability to identify changes in an individuals movements and infer certain things. For example, being able to guess the relative weight and flexibility of contents within a backpack being worn by the surveilled individual, the presence of heavy objects being carried within a suit jacket, or changes in contents of a bag carried in-hand.

If we also assume that the surveilled individual will be caught by multiple cameras from different locations, the combination of angles and perspective will further help define the unique characteristics and load of the individual. Police forces could use that intelligence to infer the presence of weapons for example.

Higher resolution monitoring also lends itself to identifying and measuring other more personal attributes of the person being monitored. For example, details on the type and complexity of jewelry being worn, tattoos, or unique visible identifiers.

Using physical tells such as sweat density, head-bobbing (see an earlier blog – Body Worn Camera Technologies), and heart-rate, it will be possible to identify whether the person is stressed, under duress, or has recently exerted themselves.

Four: The Reverse Paradigm
Such technologies are not exclusive to police forces and government departments. It is inevitable that these technologies will also be leveraged by civilians and criminals alike – bringing a rather new dynamic to future policing.

For example, what happens if anti-riot police cannot obfuscate their identity during a riot – despite balaclavas and protective helmets? If every retaliatory baton strike, angered shield charge, tear gas spray, or taser use can be individually attributed to the officer that did it (and the officer can be identified by face capture or uniform number), officers become individually responsible and ultimately accountable for their actions.

Imagine for instance that every office present now had a virtual folder of video captures detailing their actions during the riots. With little effort and likely a little crowd-sourcing, each officer’s identity would be discovered and publicly associated with their actions.

It would be reasonable to expect that police officers would adjust their responses to riot situations – and its likely that many would not want to expose themselves to such risk. While it is possible new or existing laws could be used to protect officers from most legal consequences of “doing their job”, the social consequences may be a different story.

We’ve already seen how doxing can severely affect the life and safety of those that are victims, it would be reasonable to assume that some percentage of a rioting population would be only too eager to publish a police officers “crimes” along with all their identity, address, and any other personal data they could find. Would we expect police officers with young families take on the risk of riotous agitators arriving at their families doorstep – looking for vengeance.

Five: Ubiquitous Consumer-led Video Surveillance
A question will inevitably be raised that the ability to construct digital trails or infer motivations and harm will be restricted to police and government entities. After all, they’re the ones with the budget and authority to install the cameras.

These challenges may be overcome. For example, new legal test cases may force governments to make such video feeds publicly available – after all, funding is through public money. We’ve seen such shifts in technology access before – e.g. GPS, satellite mapping, satellite imagery.

An interesting model for consumer video that could become even more complete and ubiquitous video capture (and analytics) may be relatively simple.

Just as today’s home security systems have advanced to include multiple internal and external high-resolution video feeds to the cloud, maybe the paradigm changes again. Instead of a managed security monitoring service, things become community based and crowd sourced.

For example, lets say that for each high-resolution video camera you install and connect to a community cloud service, you gain improved access to the accumulated mesh of every other contributing camera. Overlaying that mesh of camera feeds, additional services augment the video with social knowledge and identity information, and the ability to trace movements around an event – just like the police could – for a small fee. The resultant social dynamics would be very interesting… does privacy end at your doorstep? If every crime in a public space is captured and perpetrators labeled, does that make petty and premeditated crime disappear? Does local policing shift to community groups and vigilantes?

Conclusions
Advances in high-resolution digital video cameras and facial recognition will play a critical role in how policing society changes over the next couple of decades.

The anticipated advancements will certainly make it easier for police forces to track, identify, and hold accountable those that perpetuate crimes. But such technologies will also inevitably be likewise utilized by those being policed. While the illustrated scenarios began with the recent riots in France, the repercussions for police forces in Mexico facing wealthy cartels would perhaps be more dire.

It is too early to tell whether the ubiquity of these advancing technologies will tilt the hand in one direction or the other or whether we’ll reach a new technology stalemate. Accountability for an individuals actions – backed by proof – feels like the right societal movement, but opens doors to entirely new forms of abuse.

*** This is a Security Bloggers Network syndicated blog from Technicalinfo.net Blog authored by Gunter Ollmann. Read the original post at: http://technicalinfodotnet.blogspot.com/2018/12/ubiquitous-video-surveillance-and.html

Another Password Manager Leak Bug: But KeePass Denies CVE
‘Finish Him!’ US Kills Huawei With Final Tech Ban
Why Traditional Approaches Don’t Work for API Security
Zero-Trust Alone Won’t Save You
Case May Impact Role of Lawyers in Data Breaches and IR
Illicit Telegram Groups: A New Dark Web Frontier?
Five Questions Every CEO Should Ask About DFARS & CMMC Compliance
Top IoT Predictions for 2023: Doubling Down on IoT Device Security, Introducing New Standards, and More
What is Fintech as a service & the Impact of APIs on Fintech?
Google’s open source team layoffs: Your software supply chain security is at risk