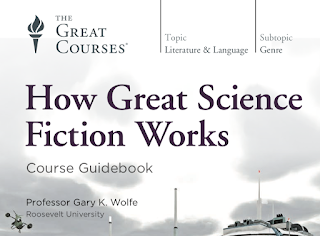 I very much enjoyed Dr. Wolfe’s Great Courses lecture. I have always considered myself to be a science fiction fan, but after listening to these lectures, I learned that there are numerous holes in my science fiction education that I will have to get busy filling.

To my great surprise, I learned that the mother of science fiction is Mary Shelly, the author of ‘Frankenstein; or The Modern Prometheus,” published in 1818. She was the first author to tell a fictional tale where the catalyst of the entire story arc was a bit of science that was tantalizingly just out of modern reach. Electricity might be able to reanimate dead tissue. What a great idea. The fact that a woman created an entire genre of writing is fascinating by itself but when you consider that she did it when, at the time, respectable women didn’t write novels and especially didn’t write horror/gothic novels, Shelly’s accomplishment is extraordinary. And she wasn’t done there. Some scholars say she is the first author to create a post-apocalyptic novel too when she published, “The Last Man” in 1826.
On the other end of the spectrum, I was saddened to discover that men treated women and minorities just as badly in the science fiction family as they did everywhere else. Although Shelly’s Frankenstein was fabulous start, science fiction has largely been, until recently, an American and British tradition and mostly written by white people. That is slowly changing now, but since Shelly’s beginning to Ursula K. Le Guin’s “The Left Hand of Darkness” in 1969, the story authors and pulp magazine editors that published these stories were not diverse. There were exceptions of course, but the bulk of the writers were white and American or British.
What I found the most interesting about Dr. Wolf’s explanation of science fiction though was my realization that there isn’t much difference between science fiction and other genres. They all tell fictional stories. Literature scholars rate good literature higher than the other forms because authors tell good stories that are realistic but also illuminate some piece of the human condition: love, sadness, life, death, etc. Authors who can write at multiple levels like that are very good at their craft.
Other genres are normally frowned on by literature scholars because the authors usually tell fantastical stories; stories that would never happen in the real world. Science Fiction authors use not-yet-existing-but plausible science to explain visionary possibilities. Fantasy authors uses magic and/or the supernatural to explain their whimsical, imaginary, and even grotesque tales. Horror writers uses the supernatural to explain their stories of the macabre. But even these lesser forms of storytelling, as judged by the literature scholars, could be literature too if they illuminated the human condition somehow as many of the great science fiction books do. The difference between literature fans and science fiction fans though is that, sometimes, science fiction fans just want a rip-roaring story that doesn’t make us think too much; stories like space operas and space westerns where there are lots of spaceships and robots and flying cities and the heroes save the day and they don’t give a hoot about the human condition. Science fiction fans will take some illumination of the human condition but it is not a prerequisite.
I recommend Dr. Wolfe’s Great Course. I learned a lot and because of it, I have a deep stack of great science fiction to discover.
References
“Frankenstein; or The Modern Prometheus,” by Mary Shelly, published by Lackington, Huges, Harding, Mavor, and Jones, 1818, Last Visited 10 August 2018,
https://www.thegreatcoursesdaily.com/mary-shelley-science-fiction/
“FRANKENSTEIN PUBLISHED,” History.com Staff, 2009, A+E Networks, Last Visited 8 August 2018,
http://www.history.com/this-day-in-history/frankenstein-published
“How Great Science Fiction Works,” by Gary K. Wolfe, Audible Audio, The Great Courses, #2984, Published 8 January 2016 by The Teaching Company, Last Visited 8 August 2018,
https://www.goodreads.com/book/show/29338161-how-great-science-fiction-works
“How Great Science Fiction Works: Course Guidebook” by Professor Gary K. Wolfe, Roosevelt University, Published by The Great Courses, 2016.
“This Day in History, 11 Mar 1818, Frankenstein Published,” History, Last Visited 8 August 2018,
https://www.history.com/this-day-in-history/frankenstein-published
“The Last Man,” by Mary Wollstonecraft Shelley, published by Galignani, 1826, Last Visited 10 August 2018,
https://books.google.com/booksid=l78NAAAAQAAJ&printsec=frontcover&source=gbs_ge_summary_r&cad=0#v=onepage&q&f=false
“Mary Shelley: Meet The Teenage Girl Who Invented Science Fiction,” by Whitney Milam, Digital Communications at National Security Action, 11 July 2015, Last Visited 10 August 2018,
https://amysmartgirls.com/mary-shelley-meet-the-teenage-girl-who-invented-science-fiction-3735d785411c
“Mary Shelley, Frankenstein and the Villa Diodati,” by Greg Buzwell, Discovering Literature: Romantics and Victorians, British Library, 15 May 2014, Last Visited 8 August 2018,
https://www.bl.uk/romantics-and-victorians/articles/mary-shelley-frankenstein-and-the-villa-diodati

*** This is a Security Bloggers Network syndicated blog from Terebrate authored by Rick Howard. Read the original post at: https://terebrate.blogspot.com/2018/08/book-review-how-great-science-fiction.html

Keeping Up With Encryption in 2020