Countless Western Digital customers saw their MyBook Live network storage drives remotely wiped in the past month thanks to a bug in a product line the company stopped supporting in 2015, as well as a previously unknown zero-day flaw. But there is a similarly serious zero-day flaw present in a much broader range of newer Western Digital MyCloud network storage devices that will remain unfixed for many customers who can’t or won’t upgrade to the latest operating system.

Researchers Radek Domanski and Pedro Ribeiro originally planned to present their findings at the Pwn2Own hacking competition in Tokyo last year. But just days before the event Western Digital released MyCloud OS 5, which eliminated the bug they found. That update effectively nullified their chances at competing in Pwn2Own, which requires exploits to work against the latest firmware or software supported by the targeted device.

Nevertheless, in February 2021, the duo published this detailed YouTube video, which documents how they discovered a chain of weaknesses that allows an attacker to remotely update a vulnerable device’s firmware with a malicious backdoor — using a low-privileged user account that has a blank password.

The researchers said Western Digital never responded to their reports. In a statement provided to KrebsOnSecurity, Western Digital said it received their report after Pwn2Own Tokyo 2020, but that at the time the vulnerability they reported had already been fixed by the release of My Cloud OS 5.

“The communication that came our way confirmed the research team involved planned to release details of the vulnerability and asked us to contact them with any questions,” Western Digital said. “We didn’t have any questions so we didn’t respond. Since then, we have updated our process and respond to every report in order to avoid any miscommunication like this again. We take reports from the security research community very seriously and conduct investigations as soon as we receive them.”

Western Digital ignored questions about whether the flaw found by Domanski and Ribeiro was ever addressed in OS 3. A statement published on its support site March 12, 2021 says the company will no longer provide further security updates to the MyCloud OS 3 firmware.

“We strongly encourage moving to the My Cloud OS5 firmware,” the statement reads. “If your device is not eligible for upgrade to My Cloud OS 5, we recommend that you upgrade to one of our other My Cloud offerings that support My Cloud OS 5. More information can be found here.” A list of MyCloud devices that can support OS 5 is here.

But according to Domanski, OS 5 is a complete rewrite of Western Digital’s core operating system, and as a result some of the more popular features and functionality built into OS3 are missing.

“It broke a lot of functionality,” Domanski said of OS 5. “So some users might not decide to migrate to OS 5.”

In recognition of this, the researchers have developed and released their own patch that fixes the vulnerabilities they found in OS 3 (the patch needs to be reapplied each time the device is rebooted). Western Digital said it is aware of third parties offering security patches for My Cloud OS 3.

“We have not evaluated any such patches and we are unable to provide any support for such patches,” the company stated. 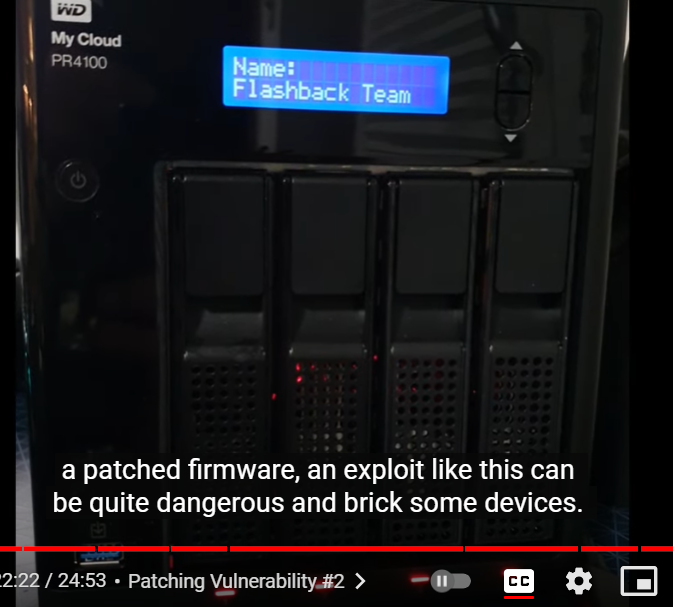 A snippet from the video showing the researchers uploading their malicious firmware via a remote zero-day flaw in MyCloud OS 3.

Domanski said MyCloud users on OS 3 can virtually eliminate the threat from this attack by simply ensuring that the devices are not set up to be reachable remotely over the Internet. MyCloud devices make it super easy for customers to access their data remotely, but doing so also exposes them to attacks like last month’s that led to the mass-wipe of MyBook Live devices.

“Luckily for many users they don’t expose the interface to the Internet,” he said. “But looking at the number of posts on Western Digital’s support page related to OS3, I can assume the userbase is still considerable. It almost feels like Western Digital without any notice jumped to OS5, leaving all the users without support.”

Dan Goodin at Ars Technica has a fascinating deep dive on the other zero-day flaw that led to the mass attack last month on MyBook Live devices that Western Digital stopped supporting in 2015. In response to Goodin’s report, Western Digital acknowledged that the flaw was enabled by a Western Digital developer who removed code that required a valid user password before allowing factory resets to proceed.

If attackers get around to exploiting this OS 3 bug, Western Digital might soon be paying for data recovery services and trade-ins for a whole lot more customers.

*** This is a Security Bloggers Network syndicated blog from Krebs on Security authored by BrianKrebs. Read the original post at: https://krebsonsecurity.com/2021/07/another-0-day-looms-for-many-western-digital-users/