On November 6, 2020, the US Attorney in the Eastern District of Virginia announced the sentence for a husband and wife, Chirag Choksi and Shachi Majmudar, both 36 years old.  This pair had involved themselves in the money laundering side of an international scam ring that preys on the elderly via call centers located in India.  Chirag will serve 78 months in prison while his wife Shachi will serve 14 months in prison.

I’ve had the pleasure of presenting my research on Indian Call Centers at a meeting the Federal Trade Commission hosted in Washington DC last year.  The scope of these networks and the absolute impunity with which they operate should be a cause of national shame in India.  In 2019, according to the Consumer Sentinel Network Data Book 2019, assembled by the Federal Trade Commission, reported 647,472 “Imposter Scams” with total losses of $667 Million, primarily to the elders who are most deserving of our protection.  (These scams are increasing rapidly.  In 2017 there were 461,476 Imposter Scam complaints, in 2018 there 549,732 complaints.) 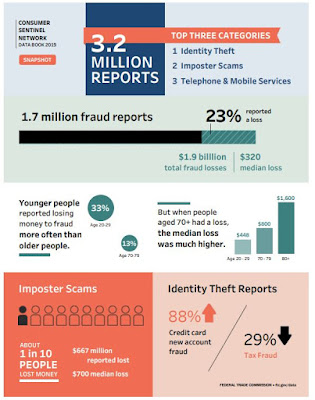 Indian Call Centers placed “robocalls” blasting them primarily to seniors in the United States which played a recorded message indicating that the recipient had been charged with a crime and needed to immediately call a certain number to avoid arrest.  When the number was called, the US-based number was routed via a Voice Over IP (VOIP) gateway to call center workers in India who would fraudulently identify themselves as a law enforcement officer and threaten immediate arrest if the caller did not follow their directions.  The caller was instructed to go to their bank, withdraw as much cash as the fake law enforcement officer was able to determine they could get, and then send the money by Federal Express, UPS, or the US Postal Service to a US-based address.

The Money Mules: Choksi and Shachi

There were actually three defendants in this indictment, but they are only a tiny part of the overall scam.  Chirag Janakbhai Choksi and Shachi Naishadh Mamjudar worked for a money mule recruiter, Shehzadkhan Khandakhan Pathan.  Pathan ran mules that he had recruited in many locations, including at least New Jersey, Minnesota, California, Indiana, Texas, and Illinois, although not all have been identified and charged yet.  The criminal complaint against Pathan remains sealed, which makes it likely more charges are forthcoming.  In each location, money mules of Indian origin were waiting to pick up packages of cash.  Chirag and Shachi were the Minnesota Money Mules.
The Money Mules would pick up the bulk cash shipments from their destinations, presenting counterfeit identification documents that used fictitious names in order to hide their identity.  In order to keep their lucrative position in the mule network, mules were required to quickly respond to pick-up orders.  They were also required to video themselves opening the package and counting the cash to ensure that they weren’t skimming more of the money than they were allowed.
Shachi was primarily the assistant, which is why she got a lesser sentence.  She would log in to FedEx or USPS to track the delivery of the packages, so that Chirag would know when he was clear to do a pick-up run.  She would also videotape Chirag as he opened the packages and counted the money.  She would also frequently be the person who went to the bank to deposit the cash into accounts belonging to other members of the conspiracy.

In one example from the indictment, Chirag was instructed to go to 9594 Grey Widgeon Place in Eden Prairie, Minnesota to retrieve a package containing $8,500 in cash that had been sent to “Aldo Ronald.”  The FedEx tracking number confirms the package was signed for by someone at that address, and that the package was shipped from Chesterfield, Virginia, where the victim resided. 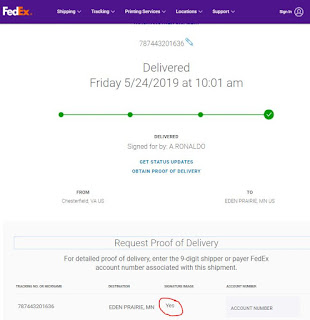 Strangley, that 1600 square foot duplex claims to have seven current residents, according to WhitePages.com, including Shachi! 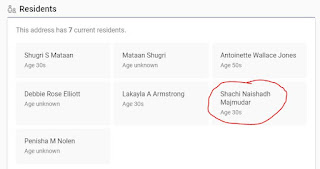 According to their Facebook pages, Shachi moved to Minneapolis, Minnesota in 2013.  (The “moved” actually says 2016, but she says in her comments “I actually moved here in 2013, Facebook is just acting weird.”)  Sadly for the family, the parents who are now headed to prison, posted photos of their newborn baby in January 2019. 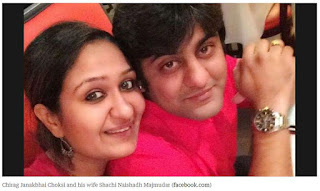 The co-conspirator, Shehzadkhan Khandakhan Pathan, goes by the name Shehzad Khan on Facebook and, like his Facebook friend Chirag, is from Ahmedabad, India. He was arrested by the FBI in Houston, Texas on January 16, 2020 and taken into custody by the US Marshall’s Service.
This structure was VERY familiar to me, as it works in exactly the same way as the case we documented in 2016 in our blog post Major Call Center Scam Network Revealed – 56 Indicted.
In fact the similarities are extreme.  In that case, the primary call centers involved included a major group in Ahmedabad India, but had money mule “runners” all over the United States, who not only handled financial transactions, but also sought out victim candidates!
Not only are the cases STRUCTURALLY  similar, but Pathan SEEMS to be linked to one of the key players in that network on Facebook.  Pathan’s Facebook friend “Hardik Dave” who is likely Hardik Patel, also from Ahmedabad, from the previous case.  Although Hardik’s friends marked as private, but has several interactions on his Facebook page from “Hitesh Patel” who was at the core of the 2016 case.  In that case, Ahmedabad call center companies including Call Mantra, Sharma BPO, Worldwide Solutions, and Zoriion Communications were involved in the scams.
A superseding indictment relating to Pathan was announced June 17, 2020, and names several additional co-conspirators. 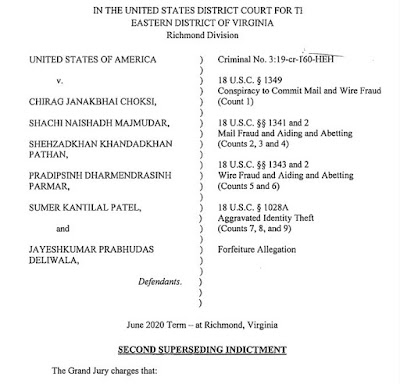 In addition to Chirag and Shachi, the new indictment includes:
In the new indictment we learn that the  “conspirators regularly communicated using WhatsApp Messenger.” We also learn additional details about the scam calls:
“The messages told the recipients that they had some sort of serious legal problem. Often the purported problem related to potential criminal charges for the victim, tax problems, or THE RISK OF LOSING A FEDERAL BENEFITS PROGRAM SUCH AS SOCIAL SECURITY PAYMENTS.” (emphasis added)
We also learn that a number of the victims had recently applied for a loan, making them aware that the victim now had cash available!
Pathan, the recruiter, provided the counterfeit identity documents, including fake drivers licenses, and alerted his mule network where the package was being delivered and which identity they should use to retrieve the package.  After they had the cash, Pathan would let them know how much they could keep and give them details of what bank account they should deposit the additional funds into. In some cases the funds were sent via wire transfer, and Pathan would alert his money mules via WhatsApp where the money had been wired and which identity documents they would need to present in order to pick up the money from the bank account where they had been deposited.

Both Pradipsinh Dharmendrasinh Parmar and Sumer Kantilal Patel were money mules like Chirag.  They are charged with retrieving and signing for packages of cash, photographing or videoing themselves opening the packages and counting the cash, receiving and using counterfeit identification bearing their likeness but the name of another person, and picking up money transfers via Western Union, MoneyGram, and Walmart to Walmart, and resending portions of that amount to other locations.
Pradispsinh Parmar is also Facebook friends with Pathan, and also from Ahmedabad, India.  His Facebook page says he lives in Spotswood, New Jersey.  HIS Facebook friend Sumer Patel is not friends with any of the other co-conspirators and may be a name coincidence as he seems to be in Brisbane, Australia.
Parmar, for example, picked up a package containing $20,000 cash sent to the name of “Neon Fredo” at 55 Stratford Village, Lancaster, Pennsylvania.
Parmar also picked up a MoneyGram of $820 sent from a victim to the name of Larry A Lauzon, in North Carolina.  (Because he had the reference number, it was not necessarily picked up in that location.)
Patel similarly received Walmart-to-Walmart funds, including funds sent from Texas to “Caleb N Cranstone” in Virginia.
Deliwala received and distributed a set of 20 counterfeit identification documents.
Charges in the case include:
18 U.S. Code § 1341 – Mail fraud
18 U.S. Code § 1343 – Wire fraud
18 U.S. Code § 1349 – Attempt and conspiracy
18 U.S. Code § 982 – Criminal forfeiture
Recent Articles By Author

*** This is a Security Bloggers Network syndicated blog from CyberCrime & Doing Time authored by Gary Warner, UAB. Read the original post at: http://garwarner.blogspot.com/2020/11/us-victims-of-indian-call-center-scams.html