A roundup of UK focused Cyber and Information Security News, Blog Posts, Reports and general Threat Intelligence from the previous calendar month, May 2020.

EasyJet’s disclosure of a “highly sophisticated cyber-attack”, which occurred in January 2020, impacting 9 million of their customers was the biggest cybersecurity story of May 2020 in the UK. Although no details about this ‘cyber-attack’ were disclosed, other than 2,208 customers had their credit card details accessed.

Using terms like “highly sophisticated” without providing any actual details of the cyberattack makes one think back to when TalkTalk CEO Dido Harding described a cyber-attack as “significant and sustained cyber-attack” in 2015. In TalkTalk’s case, that cyber attack turned out to be a bunch of teenage kids taking advantage of a then 10-year-old SQL injection vulnerability.  City A.M. described Dido’s responses as “naive”, noting when asked if the affected customer data was encrypted or not, she replied: “The awful truth is that I don’t know“. Today Dido is responsible for the UK governments Track, Test and Trace application, which no doubt will ring privacy alarms bells with some.

Back to the EasyJet breach, all we know is the ICO and the NCSC are supporting UK budget airline, EasyJet said “We take issues of security extremely seriously and continue to invest to further enhance our security environment. There is no evidence that any personal information of any nature has been misused, however, on the recommendation of the ICO, we are communicating with the approximately nine million customers whose travel details were accessed to advise them of protective steps to minimise any risk of potential phishing. We are advising customers to be cautious of any communications purporting to come from EasyJet or EasyJet Holidays.”

It will be interesting to see the DPA enforcement line Information Commission’s Office (ICO) adopts with EasyJet, especially considering the current COVID-19 impact on the UK aviation industry.  Some security commentators have called ICO a “Toothless Tiger” in regards to their supportive response, an ICO label I’ve not heard since long before the GDPR came into force. But the GDPR still has a sting its tail beyond ICO enforcement action in the UK, in that individuals impacted by personal data breaches can undertake a class-action lawsuit. So then, it can be no real surprise to law firm PGMBM announce it has issued a class-action claim in the High Court of London, with a potential liability of an eye-watering £18 billion!. If successful, each customer impacted by the breach could receive a payout of £2,000.

The 2020 Verizon Data Breach Investigations Report (DBIR) was released, the most valuable annual report in the cybersecurity industry in my humble opinion. The 2020 DBIR used data compiled before COVID-19 pandemic.  The report analyses 32,002 security incidents and 3,950 confirmed breaches from 81 global contributors from 81 countries. 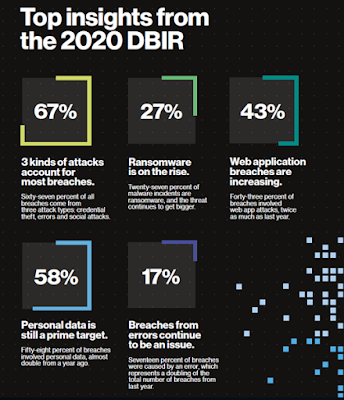 The vast majority of breaches continue to be caused by external actors.

The 2020 DBIR highlighted a two-fold increase in web application breaches, to 43%, and stolen credentials were used in over 80% of these cases. Ransomware had a slight increase, found in 27% of malware incidents compared to 24% in the 2019 DBIR with 18% of organisations reported blocking at least one piece of ransomware last year.

Pitney Bowes was hit with ransomware for the second time in 7 months. Pitney Bowes said attackers breached company systems and accessed “a limited set of corporate file shares” that “contained information used by our business teams and functional groups to conduct business-related activities.” News reports state the Maze ransomware group is behind the attack, threatening to post confidential if Pitney Bowes does not pay up.

Amazon’s UK website was defaced with racist abuse,  which appeared on multiple listings on its UK website. Amazon has not disclosed how long the racist language remained on the site, but it sparked outrage on Twitter, Amazon said: “We investigated, removed the images in question and took action against the bad actor”.

LogMeOnce, a password identity management suite provider, has published a detailed interview with myself titled ‘Passwords are and have always been an Achilles Heel in CyberSecurity’. In the Q&A I talk about Passwords Security (obviously), Threat Actors, IoT Security, Multi-Factor Authentication (MFA), Anti-Virus, Biometrics, AI, Privacy, and a bit on how I got into a career in Cybersecurity.

*** This is a Security Bloggers Network syndicated blog from IT Security Expert Blog authored by SecurityExpert. Read the original post at: http://feedproxy.google.com/~r/securityexpert/~3/uMmv27Is71Q/cyber-security-roundup-for-june-2020.html