How our configuration management actually works

So, let’s dig into some technical details.

The pillars – and our configuration structure

After we’d modeled the configuration in that way, we could use the pillar systems to build it out. In order to apply those hierarchies we used include statements – in the top.sls file, for example, we included the configuration pillar of the specific device; inside the device pillar we included the pillar of its father in the hierarchy tree, and so on.

Let’s see a little bit of code for a better understanding.

Our top.sls file is very simple and look like this :

Let’s take a closer look at our pillar directory structure: 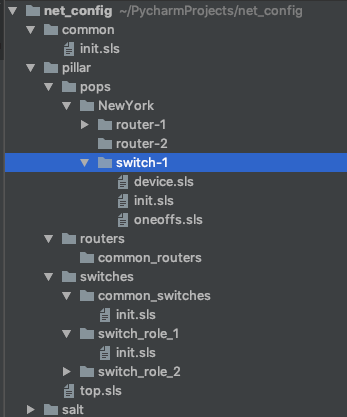 After building the configuration, the next step is to render the configuration to the device-specific language (e.g. vendor Config Structure) and create the procedure for applying it. For the rendering, we used Jinja2 , a common templating tool. We created Jinja templates for each part of our configuration and, on top of these, built Salt states for loading them into the device using the Salt-NAPALM module.

Jinja is a very convenient language for writing templates, although it’s not necessarily pleasing on the eye. If the template files becomes very long or too complicated you can get dizzy just from viewing them. So, in order to keep our templates maintainable we broke the configuration into many small templates – which are easier to understand and maintain.

Here’s an example of a template for configuration vlans. Vlans.j2 (by extending the group_base we using the template namespace):

The template is actually a configuration of vlans on the device. The length of this template is 5 lines, which we believe is optimal for templates  (Try to imagine how hard is to read such a template with more than 100 lines of code).

The deployment and monitoring system

After creating the infrastructure for rendering and deploying the configuration, we must define and build a process of using it in order to commit changes, deploy to our devices, and monitor that deployment. We separate this process into three parts: 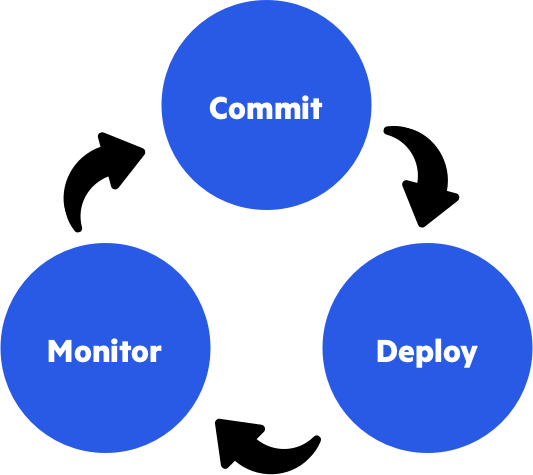 I’ll try to elaborate a little bit on each of the processes.

For managing our source-of-truth we’re using Git with GitLab Flow methodology. When engineers want to insert a change into production, they’ll open a feature-branch, and every time the feature is pushed into the GitLab repository a CI process will run. If the change affects only a single device we run the CI on the configuration for that device. If the change affects many devices, we choose a random configuration of one of the devices that will be affected. The CI loads the rendered configuration into the device in the lab. Then, once the configuration has been loaded, and the syntax is valid, the job will run some functionality testing.

After this we enforce another process of manual code review, and we merge it to the dev branch corresponding to the master branch in GitLab Flow. At this point the change is now ready for deployment.

The deployment system we built is based on Jenkins. The deploy job merges configuration from the dev branch into the production branch, and triggers the deployment process, which  is performed in multiple stages. In the first stage, we check which of the devices will be affected by the new configuration. According to the result we define steps for applying the configuration. In each step we deploy only to a subset of devices in order to reduce risk – the first step, for example, includes a small number of PoPs starting with the smallest and concluding with the largest. Between each step we monitor the network for stability to ensure we don’t cause any impact.

Here you can see part of the screenshot of our deployment process: 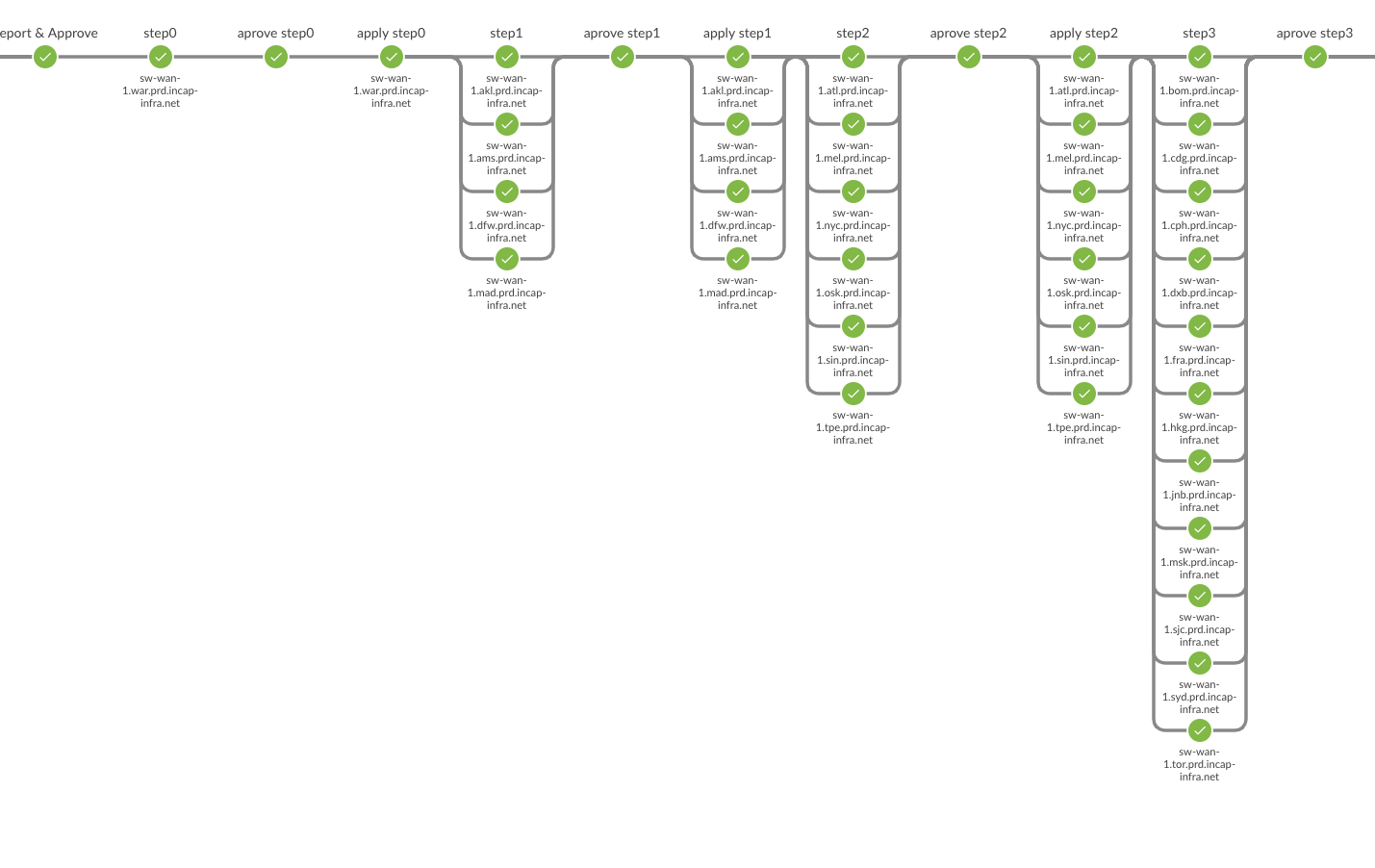 Even though the deployment procedure is well-defined and could be run easily, the reality is, we need to monitor our devices regularly. Many cases, such as emergency issues or live debug sessions, require manual configuration on the devices, but we need to ensure that this will be cleaned up at the end. The other aspect of the job is to validate that what’s  committed to the production is indeed deployed into the devices.

So, at any given time we want to validate two things:

For this task we built another Jenkins job that runs periodically and performs the validation. The validation itself is performed using a Salt state that compares all templates that should be deployed on the device. The state validates that we have no diff inside the configuration namespaces, as well as validating that there’s no other unexpected configuration on the device outside of the namespaces. The results are analyzed by the Jenkins job and rendered into a nice html report that helps us understand the nature of the diff. In case a configuration mismatch is detected, the system will send an alert to the network engineering team with the reported attached.

Here you can see a diff report done during our rollout process, which explains the large number of diffs in the report. Each section in the report defines a diff – and you can expand it to see the actual mismatch. 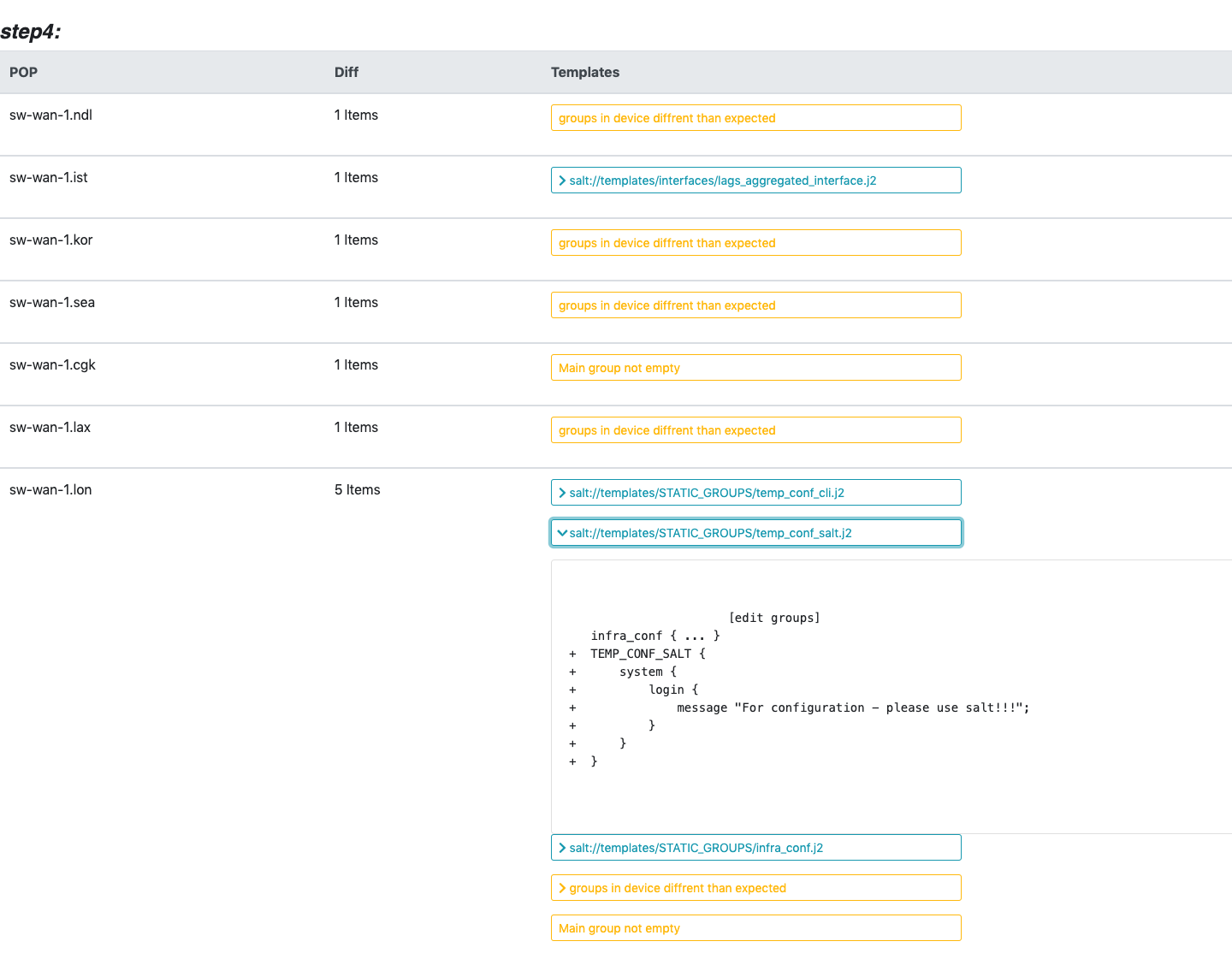 Salt is a very cool system, and really helps us to find order among chaos. It has dramatically reduced the need for manual logins to the device, improved stability of our production environment and enabled us to build more automation on top of it.

On a team level, the change has enabled us to focus on automation rather than manually maintaining production. The team has evolved from an operations team to a development team, investing most of our time in developing networking automation.

To limit the length of this blog, I’ve only described parts of what we’ve already done. My feeling is that we’ll learn more and more use cases as we continue to scale. One of my team members soon intends to post a blog about how we handle congested provider pipes in our cloud. I’m sure you can’t wait!

The post Adding Some Salt to Our Network – Part 2 appeared first on Blog.

*** This is a Security Bloggers Network syndicated blog from Blog authored by Eyal Leshem. Read the original post at: https://www.imperva.com/blog/adding-some-salt-to-our-network-part-2/