by SecurityExpert on November 13, 2019
It was just a matter of time before cyberattacks were catapulted into the forefront of the UK 2019 General Election campaign, with two cyber-attacks on the Labour Party in the last two days. 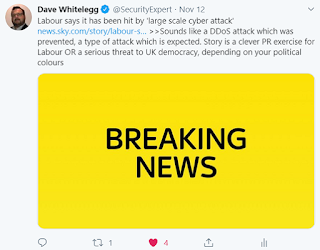 It was reported the Labour Party was targeted by two separate Distributed Denial of Service (DDoS) attacks. Labour have not publically disclosed which of its digital systems were targetted by the DDoS attacks, but it is understood cyber attacks impacted the speed of their election and campaigning tools on Monday.

The National Cyber Security Centre (NCSC) has warned all political parties about the high likelihood of being targeted with cyberattacks during elections for years. An NCSC spokesman said the Labour Party followed the correct procedure and notified them swiftly of Monday’s cyber-attack, adding: “The attack was not successful and the incident is now closed”.

Despite the apparent ‘failure’ of this attack, it raises important questions around the security of data ahead of the vote: Who is behind this attack? What is the intended outcome? Do political parties have the required level of security to ward off nation-state hackers?

A Labour source said the attacks came from computers in Russia and Brazil, but given it was a DDoS attack, that attack source is likely from ‘zombie’ controlled computers, so the countries cited as generating the network traffic on mass against the Labour Party IT systems have no bearing on who the culprit behind the attacks is. The DDoS attacks such as these can be orchestrated from any part of the world, so the culprit could be anyone from a nation-state offensive cyber team to a bored 14-year-old kid sat in a bedroom.

DDoS Cyber Attack Explained
Zombie Computers
A zombie computer is where malware with ‘command and control software” has inflected a computer, which allows the computer to be remotely controlled by a hacker over the internet to perform malicious tasks. Computer users are typically unaware their computer is infected and is being controlled. Where hackers infect and control computers on mass over the internet, it is known as a botnet.

Botnets can have tens and even hundreds of thousands of computers remotely controlled by a hacker. Such botnets are used to send spam and phishing emails, and to perform Distributed Denial of Service DDoS) attacks. A DDoS attack is where a hacker instructs computers within the botnet to send network traffic to a website or server, at the same time, to flood server(s) with so much network traffic the server or website is unable to provide a service or function.

Terry Greer-King, VP EMEA at SonicWall said, “This morning’s ‘failed’ cyber attack on the Labour Party underscores the fact that we are living in an era where political attacks are business as usual for cybercriminals. Breaching a political organisation for the purpose of compromising personal information or even blackmail tampers with the political fabric of a nation and potentially tampers with democratic processes.”
Greer-King stated “Despite the apparent ‘failure’, today’s attack once again raises important questions around the upcoming election. Any vulnerabilities within political parties will be ruthlessly exploited, hindering and possibly manipulating their information and systems. Today’s trustworthy security solutions should empower government agencies and political parties, like Labour in this instance, to consistently meet cybersecurity safeguarding requirements and procedures, and implement layered security solutions to block attackers at every step of the way.”

Tom Kellermann, Head Cybersecurity Strategist at VMware Carbon Black said “The UK government should be lauded for its ability to successfully thwart an attack campaign targeting its digital platforms. It’s clear the west is under siege as a new Cold War continues to emerge in cyberspace.

Nation-state-backed hackers have often taken advantage of divisive issues like Brexit to undermine democratically elected governments and cooperative international coalitions like NATO and the EU. It’s hard to think this attack is the last that will target the UK. In turn, the US should see these cyberattacks as a prelude for what may come in 2020.”

Anthony Webb, EMEA Vice President at A10 Networks said “Distributed denial of service (DDoS) attacks present one of the most dangerous forms of cyber threat for political parties and can cause serious reputational and financial damage. This is especially prominent during a General Election campaign when the party will be engaged in influencing voters, thus widening their cyber footprint. The UK Labour Party has suffered two DDoS attacks in quick succession, indicating that similar, future attacks are likely.

While the political parties participating will be on-guard following this latest attack, they all must be prepared for even more sophisticated, multi-vector application layer attacks throughout the remainder of the election period, that could seriously undermine their campaign.

An always-on DDoS protection system between the open web and servers is essential. Network security professionals need to embrace an extensible and adaptable position to detect both application and network attacks. The choice of defensive policy will be determined by the size of the enterprise and its resources. But as the number of high-profile campaign blackouts skyrockets, it’s worth reassessing expenditure and risk levels to combat these threats.

Ultimately, key political parties that cannot ensure that their campaign communication channels are continuously available, risk severely damaging their election campaigns – and may appear untrustworthy in the eyes of constituents. The key is to be prepared: the question is not if but when an attack will come. As we’ve seen in the last three years, cyber-attacks are now commonplace when nationwide elections or referendums are taking place.”
Recent Articles By Author

*** This is a Security Bloggers Network syndicated blog from IT Security Expert Blog authored by SecurityExpert. Read the original post at: http://feedproxy.google.com/~r/securityexpert/~3/Lw3P8dsRpoM/labour-party-ddos-cyber-attacks.html