The U.S. Securities and Exchange Commission (SEC) is investigating a security failure on the Web site of real estate title insurance giant First American Financial Corp. that exposed more than 885 million personal and financial records tied to mortgage deals going back to 2003, KrebsOnSecurity has learned.

In May, KrebsOnSecurity broke the news that the Web site for Santa Ana, Calif.-based First American [NYSE:FAF] exposed some 885 million documents related to real estate closings over the past 16 years, including bank account numbers and statements, mortgage and tax records, Social Security numbers, wire transaction receipts and drivers license images. No authentication was required to view the documents.

The initial tip on that story came from Ben Shoval, a real estate developer based in Seattle. Shoval said he recently received a letter from the SEC’s enforcement division which stated the agency was investigating the data exposure to determine if First American had violated federal securities laws.

In its letter, the SEC asked Shoval to preserve and share any documents or evidence he had related to the data exposure.

“This investigation is a non-public, fact-finding inquiry,” the letter explained. “The investigation does not mean that we have concluded that anyone has violated the law.” 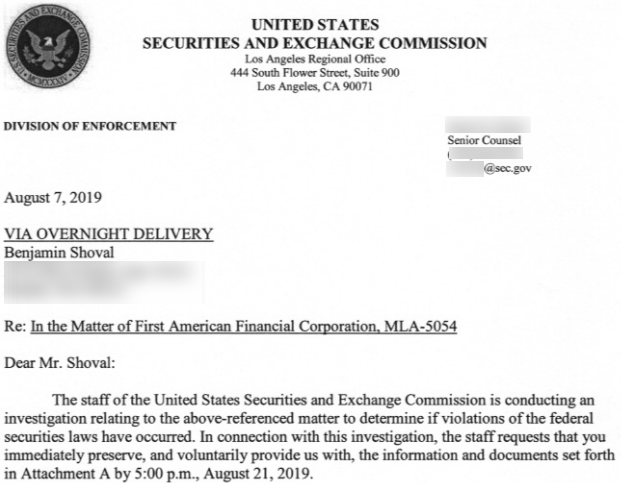 The SEC did not respond to requests for comment.

Word of the SEC investigation comes weeks after regulators in New York said they were investigating the company in what could turn out to be the first test of the state’s strict new cybersecurity regulation, which requires financial companies to periodically audit and report on how they protect sensitive data, and provides for fines in cases where violations were reckless or willful. First American also is now the target of a class action lawsuit that alleges it “failed to implement even rudimentary security measures.”

First American has issued a series of statements over the past few months that seem to downplay the severity of the data exposure, which the company said was the result of a “design defect” in its Web site.

On June 18, First American said a review of system logs by an outside forensic firm, “based on guidance from the company, identified 484 files that likely were accessed by individuals without authorization. The company has reviewed 211 of these files to date and determined that only 14 (or 6.6%) of those files contain non-public personal information. The company is in the process of notifying the affected consumers and will offer them complimentary credit monitoring services.”

In a statement on July 16, First American said its now-completed investigation identified just 32 consumers whose non-public personal information likely was accessed without authorization.

“These 32 consumers have been notified and offered complimentary credit monitoring services,” the company said.

First American has not responded to questions about how long this “design defect” persisted on its site, how far back it maintained access logs, or how far back in those access logs the company’s review extended.

*** This is a Security Bloggers Network syndicated blog from Krebs on Security authored by BrianKrebs. Read the original post at: https://krebsonsecurity.com/2019/08/sec-investigating-data-leak-at-first-american-financial-corp/