This blog is a continuation of our blog series on the Emotet banking Trojan. So far, we have analysed Emotet’s delivery mechanism and its behaviour through dynamic analysis. The host and network data captured from Emotet found that it escalates its privileges by registering itself as service, persists in multiple locations and finally deletes the dropper file.

In this post, we demonstrate how the main payload is unpacked and follow its execution after unpacking in a debugger. We also discuss how early on in the unpacking code Emotet checks for the existence of a registry key. If the registry key is not accessible, the payload is not unpacked and run. We found that this behaviour can be forced by blocking read access to the key.

The execution of Emotet comprises multiple stages of obfuscated executables that are loaded into memory and has an elaborate code flow through different memory regions. These are designed to make it harder for analysts, static analysis engines and disassemblers to analyse the Trojan.

Read part 1: Emotet: How It Might Infect Your PC

Read part 2: Emotet: Catch Me If You Can

In part two, we discussed how Emotet acts as a dropper of other malware families and how this is an indication that its operators have adopted a malware-as-a-service business model. Our analysis of an Emotet executable called 15.exe ultimately dropped Trickbot, another banking Trojan.

As discussed in the Bromium Threat Insights Report for April 2019, we continue to see a high volume of Emotet, and it is among the top threats that Bromium isolates. On computers that have Bromium installed, Emotet runs in an isolated micro virtual machine without damaging the integrity of the system. Since the malware runs dynamically it produces indicators of compromise (IOCs) that can be used by security teams to defend other parts of a network.

The main purpose of a packer is to compress and encrypt a portable executable (PE) file. The encrypted payload is unpacked at runtime and the unpacking code then passes execution to the newly unpacked code. For malware authors, packers help evade detection by making static analysis of the binary more difficult. Emotet’s packer is polymorphic which makes it even trickier for signature-based detection tools to profile the sample based on the footprint of the packer.

Let’s look at the PE file. Its resource section takes up a significant proportion of the total size of the file (51%), which is an indication that the malware might be packed. 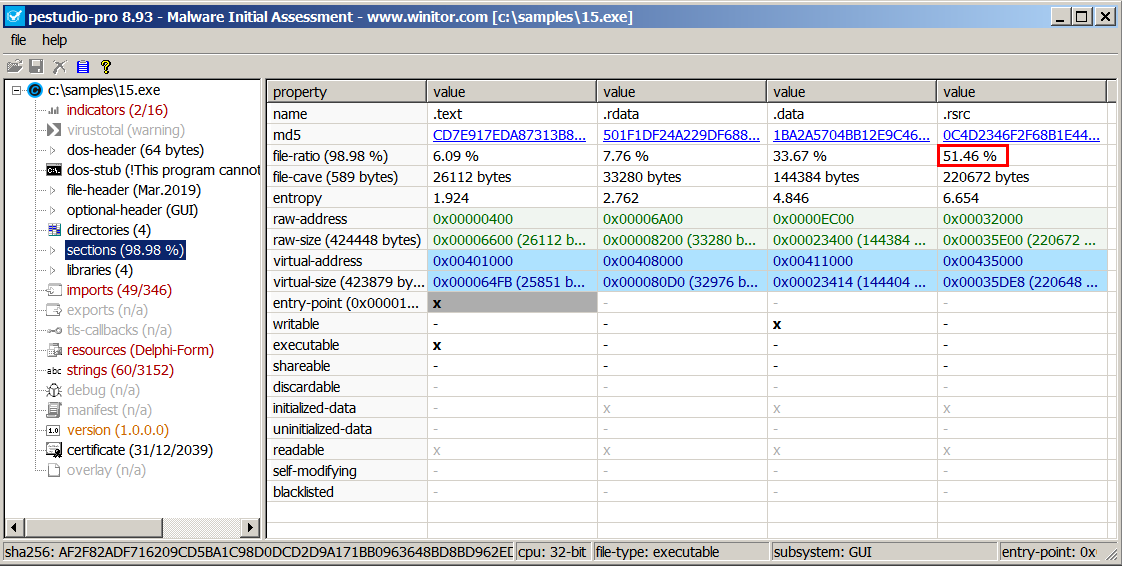 Figure 1 – Resource section consuming more than half of the binary.

Looking at the resource (.rsrc) section reveals two anomalous resources called EXCEPT and CALIBRATE. The high entropy and large size of EXCEPT suggests that this might be an encrypted payload. Dumping the resource confirms that it contains encrypted data. In some samples we found that a decrypted PE file is dropped from the .data section.

Figure 3 – Encrypted data in EXCEPT.

Emotet is modular and uses anti-analysis techniques such as sandbox detection to evade analysis. An unpacked Emotet binary contains hundreds of functions. When the suspected packed sample is opened in a disassembler such as Ghidra, only a handful of functions are identified. This is another indication that the binary is packed. 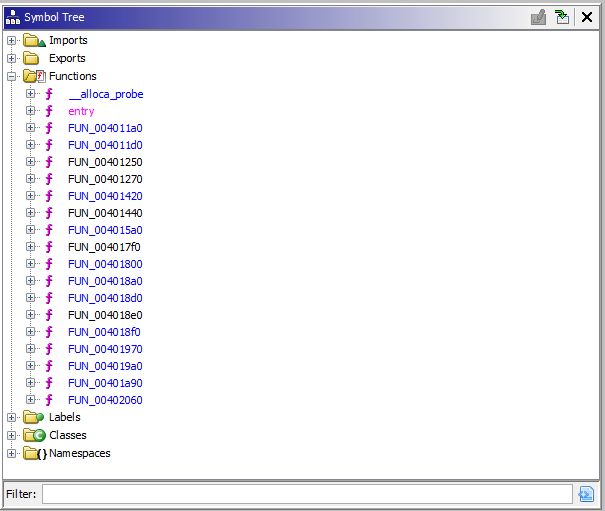 Figure 4 – List of functions identified by Ghidra in the packed Emotet sample.

During our analysis of the packer code, we noticed a function that generates an array of chars and has a conditional while(true) infinite loop. This finding made us curious whether we could trigger the infinite loop to stop the execution of the unpacking code, thereby preventing the main Emotet payload from running. The function works by reading a Windows Registry key through a call to RegOpenKeyA. If the key isn’t found, the malware enters an infinite loop (figure 5). 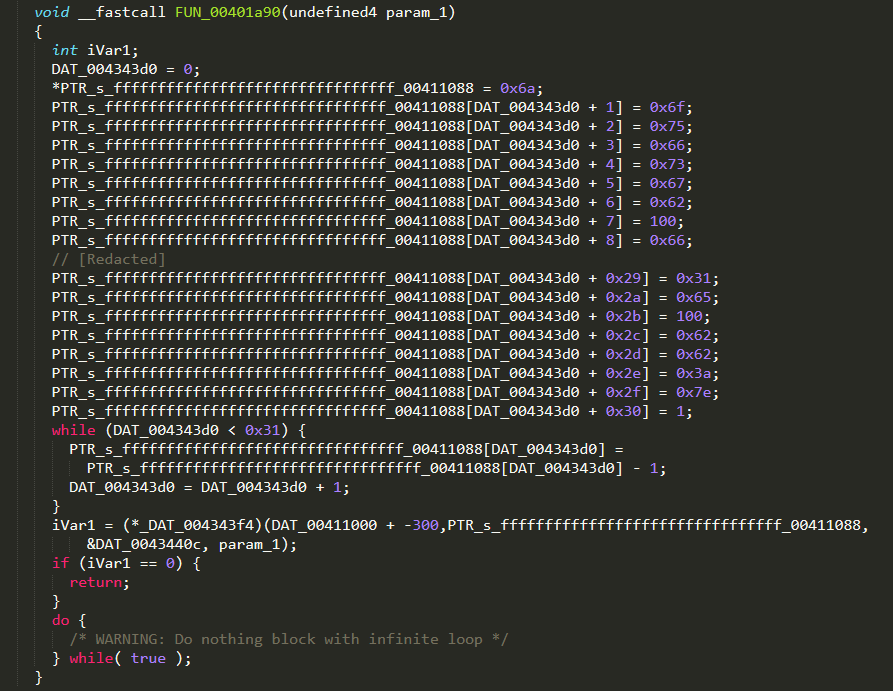 Function FUN_00401a90 decodes a string with the value “interface\{aa5b6a80-b834-11d0-932f-00a0c90dcaa9}” which is passed as a parameter to RegOpenKeyA. This registry key is required for the Windows scripting engine interface IActiveScriptParseProcedure32 to function. Specifically, the interface parses a given code procedure and adds the procedure to the namespace.

We reviewed other samples of Emotet for similar functions. Interestingly, upon execution all the samples either exited the main thread or entered an infinite loop in the absence of this registry key.

Figure 7 – Main thread goes into an infinite loop in the absence of the registry key. 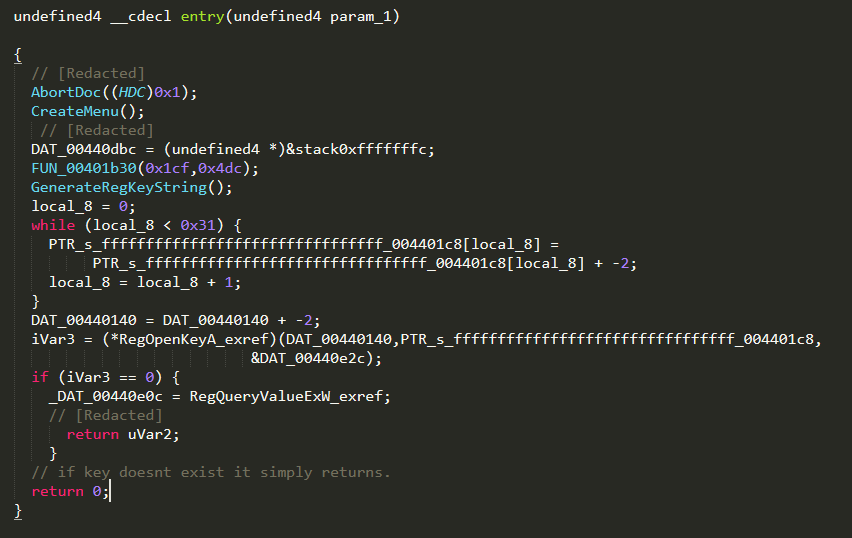 Figure 8 – Main thread exits in the absence of the registry key.

Binary analysis with a debugger

To confirm our suspicions that 15.exe is a packed Emotet binary, let’s open it in x64dbg and check its mapped memory region. In the optional header of 15.exe, address space layout randomisation (ASLR) is disabled, which means that if possible the module is loaded into memory at its preferred base address of 0x400000.

One of the imported functions in 15.exe is VirtualAllocEx. This function is used to allocate memory in a remote process and is often used by malware for process injection. We will start by putting a breakpoint on the return address for VirtualAllocEx.

If we run until the breakpoint, we see that Emotet creates an allocation of memory at 0x00220000. It then copies a code stub from the .data section of the mapped image at 0x00422200 (file offset 0x0001FE00) to the newly allocated memory space and gives control to it.

Emotet then deobfuscates API and DLL names from the code copied to 0x00220000.

It then calls GetProcAddress from kernel32.dll to get the addresses of the decoded API names.

Figure 13 – GetProcAddress API being called from the code stub at 0x00220000 to retrieve the addresses of exported APIs from the mapped image of kernel32.dll.

First, the address of LoadLibraryExA is retrieved in this way. It then uses this address to load kernel32.dll into the address space at 0x766D00000. Afterwards, it uses the handle to the loaded module kernel32.dll to call GetProcAddress on the list of functions below:

Figure 14 – Call to GetProcAddress to get the address of LoadLibraryExA.

Figure 15 – Call to LoadLibraryExA to load kernel32.dll into memory.

One of the interesting things to note is that Emotet calls GetProcAddress for an invalid API called “mknjht34tfserdgfwGetProcAddress”. Since this is invalid, the function returns a null value with an error code of 0000007F (ERROR_PROC_NOT_FOUND). In all the Emotet samples we reviewed a call was made to GetProcAddress for this invalid function name.

Figure 17 – Call to GetProcAddress for an invalid API.

Figure 19 – Function addresses of APIs saved on the stack.

Once the code stub has retrieved the function addresses, VirtualAlloc is called to allocate another memory region where it writes the deciphered PE file from the .data section of 15.exe, rather than from the .rsrc section.

Dumping the executable and examining it reveals that it is another packed Emotet binary that contains the main payload. We have seen in some Emotet samples that the first mapped decrypted executable cannot be directly run after dumping it from memory, but this sample was able to run.

Pestudio identifies several suspicious characteristics about this file, including the absence of imports, the detection of a packer signature “Stranik 1.3 Modula/C/Pascal” and that the file may contain another file. 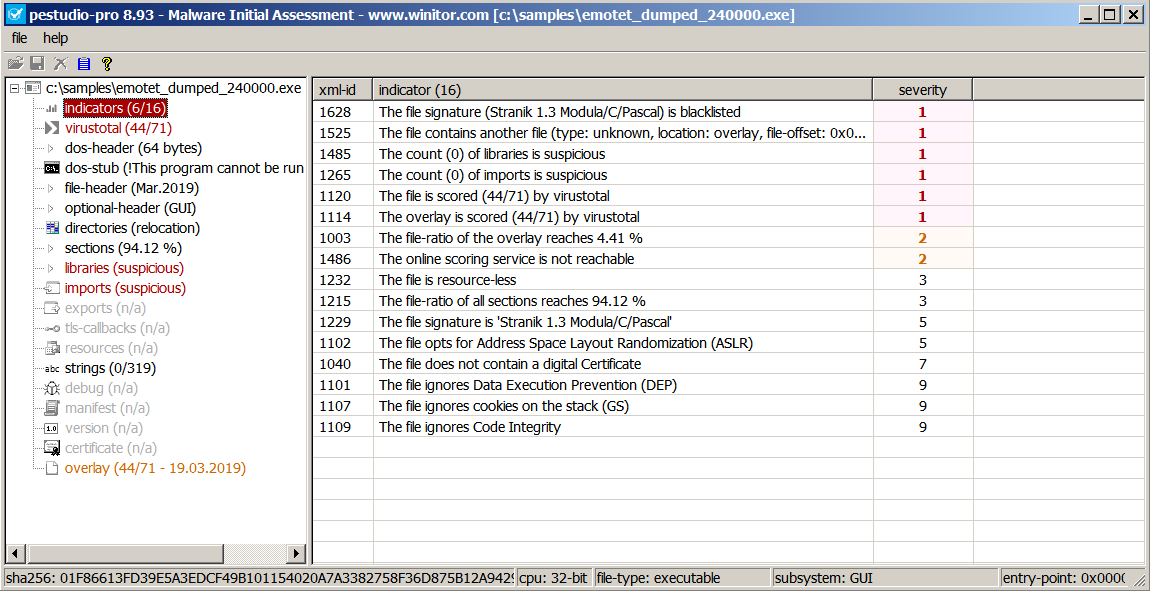 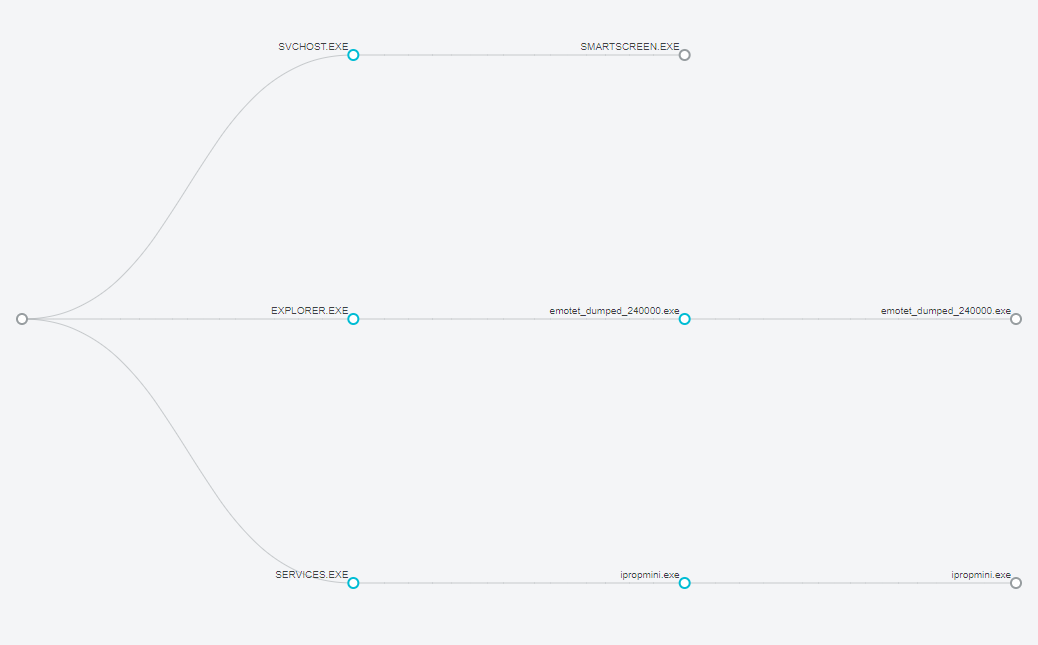 Figure 23 – Bromium Controller process interaction graph of emotet_dumped_240000.exe. It launches itself and creates service a called “ipropmini”, which closely matches the behaviour shown by 15.exe.

After writing and decrypting the executable file at 0x00240000, the code stub allocates another memory region at address 0x00260000 using VirtualAllocEx. After allocating memory, it reads the payload from memory region 0x00240000 and writes it to 0x00260000.

After writing the main Emotet payload at 0x00260000, the code stub then inserts hooks and JMP instructions in the code (figure 28). Emotet does this to make code analysis trickier and to confuse disassemblers.

After the hooks are in place the payload becomes dependent on another memory region to run which means that dumping to disk will not allow it to run even after fixing the alignment and raw offsets of the PE file’s sections. 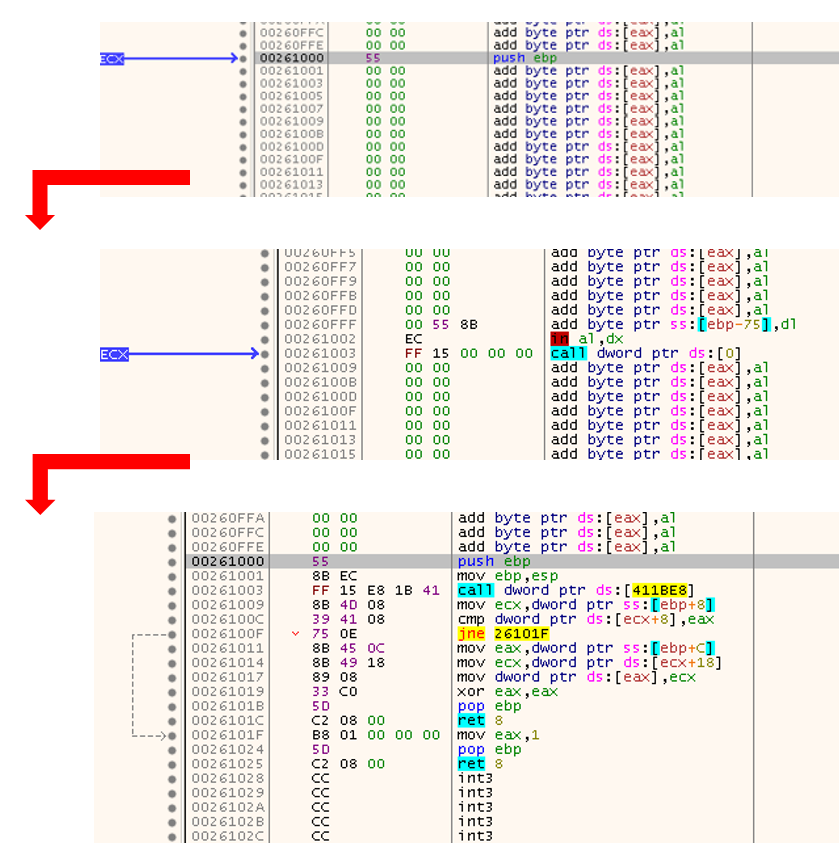 Once the payload is modified and ready at 0x00260000, the stub calls UnmapViewOfFile to unmap 15.exe from 0x00400000, which is the memory region that the first Emotet image was loaded into. It then allocates a new memory region at 0x00400000 that is the same size of the payload at 0x00260000 (15000 bytes). After allocating the new memory region, it then copies the modified payload to 0x00400000. This is a process injection technique where the malware modifies its binary in memory and then overwrites itself.

The main Emotet payload makes it hard for an analyst to follow the code flow because of how strings that might give an insight into the functionality of the malware are obfuscated.

Figure 35 – Resolution of API names from ntdll.dll and kernel32.dll.

After API name resolution, GetCurrentProcessId is called to get the process ID (PID) of Emotet‘s running process. Afterwards, Emotet iterates through all running processes to find its module name and parent PID. Once it finds its parent PID, it creates two mutexes with the format PEM%X. One of the mutexes is created using the parent process ID (PEM[PPID]) and the other uses its own PID (PEM[PID]).

After creating these mutexes, it calls CreateEventW to create an event using the format PEE%X, where %X is its parent PID. If both mutexes are successfully created, it launches 15.exe again from the same path. After launching the child process, it calls WaitForSingleObject on the PEE%X event.

The launched child process does everything same until it evaluates whether to create the two mutexes described above. This time the call to CreateMutex for mutex PEM[PPID] fails with the error “ERROR_ALREADY_EXISTS”. After the mutex creation fails in the child process, it signals the event PEE[PPID] to the parent process 15.exe. The parent process exits from a waiting state and then terminates itself. 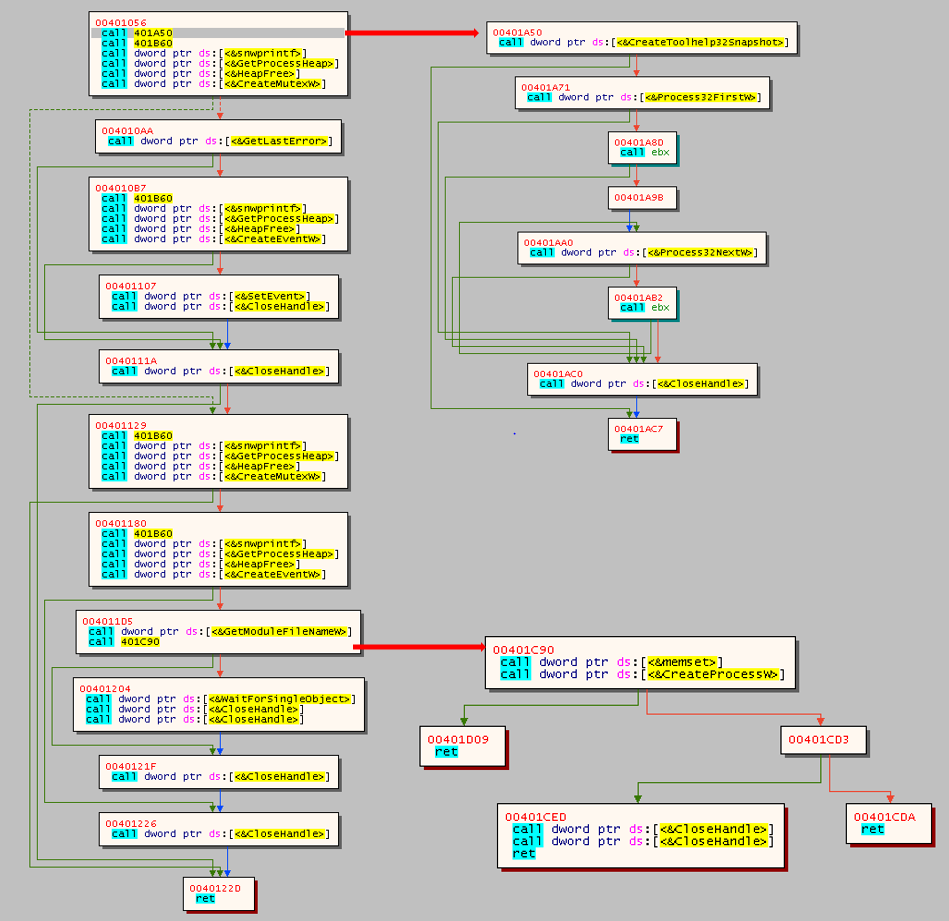 Figure 36 – Control flow graph which shows the decision to launch a child process based on calls to CreateMutex and CreateEvent.

Emotet uses a layered approach to unpack its main payload. It performs a self-injection technique to execute the payload in memory after modifying its mapped image. As the payload is never written to the filesystem and contains hooks and JMP instructions, it can easily evade anti-virus and detection based on dynamic code analysis.

The Emotet dropper can be stopped by blocking read access to the registry keys below. Since the dropper will enter an infinite loop or end the process, it will not harm the integrity of the system because the conditional branch occurs before the payload is executed.

The Emotet dropper can be detected in the following ways:

The post The Emotet-ion Game (Part 3) appeared first on Bromium.

*** This is a Security Bloggers Network syndicated blog from Bromium authored by Ratnesh Pandey. Read the original post at: https://www.bromium.com/emotet-analysis-part-3/