by Gary Warner, UAB on December 22, 2018
The Times of India reports that police have raided a call center in Noida Sector 63 where hundreds of fraud calls were placed every day to Americans and Canadians resulting in the theft of $50,000 per day.

The scammers had rented four floors of a building being operated by two scammers from Gurgaon, Narendra Pahuja and Jimmy Ashija. Their boss, who was not named by the police, allegedly operates at least five call centers. In the raid this week, 126 employees were arrested and police seized 312 workstations, as well as Rs 20 lakh in cash (about $28,500 USD).

Noida police have been cooperating very well with international authorities, as well as Microsoft, leading to more than 200 people arrested in Noida and “scores” of fake call centers shut down, including four in Sector 63.  (In a case just last month, another call center was said to have stolen from 300 victims, after using online job sites Shine.com and VintechJobs.com to recruit young money seekers by having them work conducting the scams. )

In the current scam, callers already had possession of the victim’s Social Security Number and full name.  This information was used to add authority to their request, which got really shady really fast.  The victim was instructed to purchase Apple iTunes Gift Cards, or Google Play Gift Cards, scratch the numbers, and read them to the call center employee.  The money was laundered through a variety of businesses in China and India before cashing out to bank accounts belonging to Pahuja and Ashija.

As more and more cyber crime enterprises spring up in India, the assistance of their new Centers for Cyber Crime Investigation thtat are becoming more critical to stopping fraud against Americans:

The US Embassy was quick to acknowledge the support of the newest cyber crime partners of the United States after their action at the end of November:

Another recent Times of India story from November 30, 2018, “Bogus Call Centres and Pop-up Virus Alerts – a Global Cyber Con Spun up in NCR” [NCR = National Capital Region] had more details of this trend, including this graphic: 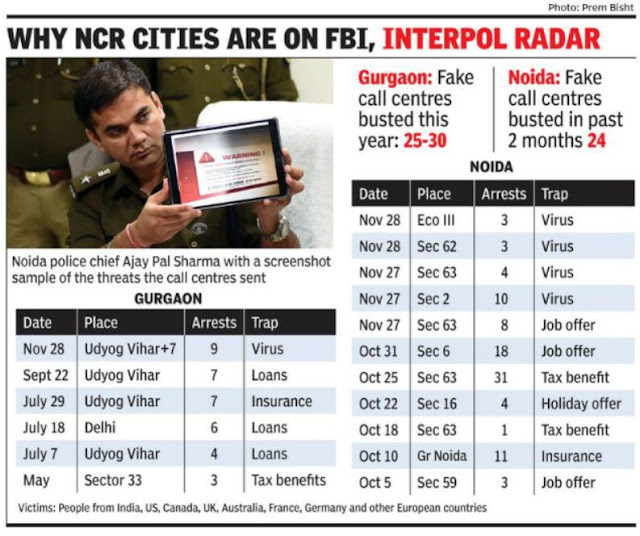 That’s at least 50 call centers shutdown just in these two regions, but with this weeks’ 126 arrests being the culmination of an on-going investigation, receiving data from both the FBI and Microsoft.

Sontosh Gupta, who was the ring leader, was previously employed by an online job site, but then created his own site,  vintechjobs (dot) com, which he used to attract call center employees, many of whom were duped into serving as his scammer army without ever being compensated for their work!

During that same two day raid, police swept through at least sixteen other call centers, according to this New York Times story, “That Virus Alert on Your Computer? Scammers in India May Be Behind It“ 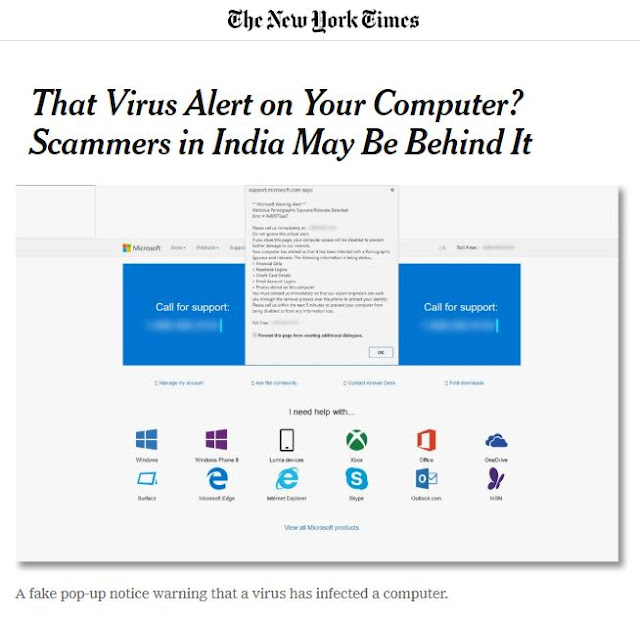 Ajay Pal Sharma, the senior superintendent of police, told the NYT that 50 of his officers swept through eight different call centers in Gautam Budh Nagar as part of the case.  Microsoft’s Digital Crimes Unit told the Times that with 1.2 million people generating $28 Billion in India working for call centers, it isn’t hard to disguise the shady callers among the legitimate businesses.

The problem is not unique to Delhi and the National Capital Region suburbs that are the current focus.  Back in July, Mumbai was in the headlines, as a massive IRS-imitating Call Center ring was broken up with the help of more great cyber crime investigators from India:

Police Inspector Madan Ballal had his story told as the focus of an article in Narratively, “This Indian Cop Took Down a Massive IRS Call-Center Scam“.

Much more investigating and arresting needs to be done, but it is a great sign that the problem is now receiving help from an emerging new generation of Indian Cybercrime Detectives!

*** This is a Security Bloggers Network syndicated blog from CyberCrime & Doing Time authored by Gary Warner, UAB. Read the original post at: http://garwarner.blogspot.com/2018/12/126-arrests-emergence-of-indias-cyber.html