Small drones are coming to the great indoors. For example, Ring, the home security division of Amazon, announced it will in mid-2021 release a small, connected security drone that will patrol inside your home.

The drone will fly about and capture video of what it observes, such as an intruder or an open door. The video would be viewable from your PC or smart phone, wherever you happen to be, whether in another room or in another country. The drone is ingeniously designed to avoid flying into objects like people and furniture. Its propellers are surrounded by fenders so they will not cause damage if the drone happens to collide with something. And it will cost only $250.

This is exciting technology! It promises to have many uses beyond just home security. In this age of COVID-19 and social distancing:

A flying bot is not the only kind of indoor drone one can imagine. Indoor drones might crawl or roll on wheels.

Naturally, indoor drones can be equipped with microphones and video cameras, and users will be tempted to make audio and video records of what their drones encounter indoors. These recordings raise a host of privacy law concerns.

Laws Against Recording of Voice Conversations: Special Caution with Audio

Recordings that are too intrusive can creep people out, and legislatures have responded. To regulate the recording of human activity, many anti-surveillance laws have accumulated over the years. In the US the laws are complex, and vary by locale.

A federal law that applies nationwide is the Wiretap Act. But many states have their own wiretap laws. So when one records a conversation, both federal and state law need to be considered.

Even though the names of these so-called “eavesdropping” laws emphasize the tapping of wires like telephone wires these laws commonly restrict the recording of oral conversations, regardless of whether the conversations go through a wire or any electronic medium.

The first general rule of thumb is that to record a voice conversation without first getting the consent of each party to the conversation can be legally dicey.

Here is an example of wiretapping law being applied in the home. An ex-wife (mother) planted an audio recorder in a teddy bear and collected evidence of an ex-husband (father) talking to a child. In a child custody dispute, the judge rejected the ex-wife’s audio evidence because neither of the parties to the conversation (father or child) consented to the recording. Todd Cooper, “Custody case tip: Don’t bug kid’s teddy bear,” Omaha World Herald, January 7, 2008.

The second rule of thumb is that privacy laws place fewer restrictions on visual recording (such as with video) of people in public. But that second rule of thumb comes with a caveat. Advanced artificial intelligence systems are able to interpret human speech by reading lips from video, rather than listening to voices from audio. “Google’s DeepMind AI can lip-read TV shows better than a pro,” New Scientist, Nov. 21, 2016. https://www.newscientist.com/article/2113299-googles-deepmind-ai-can-lip-read-tv-shows-better-than-a-pro/ Therefore, a visual recording (no audio) of people moving their lips may qualify as the recording of a conversation under the wiretap laws.

Still, recording very much lip movement with a drone won’t be easy.

Given the present state of law, a common practice for property owners is to record activity on their premises with video cameras but not audio recorders.

The third rule of thumb is that the more that you get consent from the subjects of your recording, the less is your legal danger.

In the application of these three rules of thumb, much depends on whether the subject of recording had a reasonable expectation of privacy. Ray Sanchez, “Growing Number of Prosecutions for Videotaping the Police,” July 16, 2010 https://abcnews.go.com/US/TheLaw/videotaping-cops-arrest/story?id=11179076

An expectation of privacy can be influenced by context and notices. What does a person know or what is the person reasonably likely to know in a given situation? That question is often hard to answer. But if a person has been informed in advance through a written warning, then it’s harder to conclude that they had a reasonable expectation of privacy.

So legal risk to the drone owner is lower if the subject of recording knows they are being recorded and has an opportunity to leave so they are not recorded. Obviously, an audio or visual warning (such as written sign) can be powerful evidence that the subject knew of the recording and consented to it. 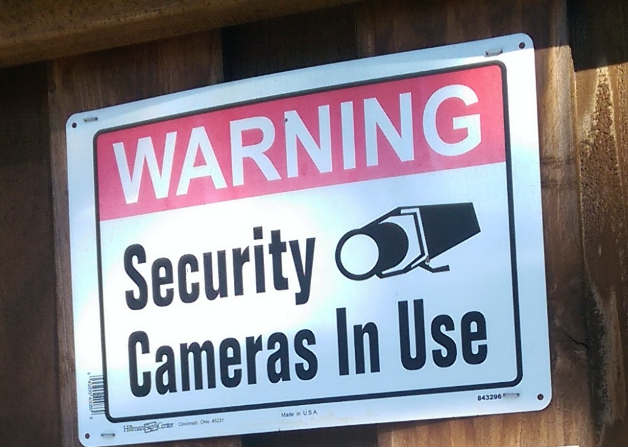 If a written sign is not displayed, contextual clues might be enough to establish that the subject consented to the recording or otherwise had no reasonable expectation of privacy. The Ring drone gives clues by making noise as it flies and hovers, which draws attention to its presence and contributes to alerting a person that the drone might be observing and recording the person. Lindsey O’Donnell, “Ring’s Flying In-Home Camera Drone Escalates Privacy Worries,” September 25, 2020 https://threatpost.com/ring-dr… A flashing light on a drone might further suggest to a person that they are being recorded.

The operator of an aggressive recording system runs another legal risk: Excessive, creepy recording may amount to illegal stalking.

“stalking” means to engage in conduct which the actor knows or has reason to know would cause the victim under the circumstances to feel frightened, threatened, oppressed, persecuted, or intimidated, and causes this reaction on the part of the victim regardless of the relationship between the actor and victim. . . .

A person who stalks another by committing any of the following acts is guilty of a gross misdemeanor: follows, monitors, or pursues another, whether in person or through any available technological or other means . . .

So in Minnesota one might be deemed to be stalking another if they use an indoor drone unreasonably too record a person and buzz around that person.

Court cases interpreting the application of such a stalking law to modern technology are few. But here is one case. A Minnesota court convicted Danny Lee Hormann of stalking, sentencing him to 30 days in jail. He put spyware on his wife’s mobile phone and on the family computer; he attached a GPS tracking device to his wife’s automobile. The court dismissed Mr. Hormann’s argument that what he did was morally justified under the circumstances in his household. “A Spy-Gear Arms Race Transforms Modern Divorce,” Wall Street Journal, Oct. 6-7, 2012.

But if Mr. Hormann had given his wife advance warning of what he was doing, the court might have considered his guilt to be less severe and might have given him a lighter sentence.

A factor that might aggravate an allegation of eavesdropping or stalking with a drone would be failure to secure the data collected by the drone. Ring products are known to store records in the cloud, but failure of the owner to use security procedures like multi-factor authentication might allow those records to leak out. Lindsey O’Donnell, “Ring’s Flying In-Home Camera Drone Escalates Privacy Worries,” September 25, 2020 https://threatpost.com/ring-drone-privacy/159562/
Accordingly, the use of prudent data security methods can reduce a drone owner’s legal risk.

Maybe drones or other robots could themselves communicate privacy warnings. Maybe a written notice could flash somewhere on the bot, or maybe the bot could emit an audio notice: “Warning. If you approach me, I will make a video and audio recording of you.” Such a warning reduces the appearance that the subject of recording suffered harm.

Given the law’s special disfavor for the recording of conversations, the designers of drones and similar systems have reason to avoid recordings of the words that come from a human mouth.

If the owners of indoor drones exercise good judgment, they are less likely to violate a law.

I would be pleased to hear your comments.

Benjamin Wright is an attorney based in Dallas, Texas. He advises a wide range of clients around the world on privacy, cybersecurity and digital forensics law. He is a senior instructor at the SANS Institute, teaching its 5-day course titled LEG523: Law of Data Security and Investigations. https://www.sans.org/cyber-sec… He is author of the book The Law of Electronic Commerce (Wolters Kluwer). Read more about Ben here.

This article provides general education and not legal advice for any particular situation. If you need legal advice, you should consult your own lawyer.

*** This is a Security Bloggers Network syndicated blog from SANS Blog authored by SANS Blog. Read the original post at: http://feedproxy.google.com/~r/SANSForensics/~3/eHuXOeHpazk/indoor-drones-raise-privacy-law-risksuntitled

When a Ripple Becomes a Wave: Cyberattack Fallout