With large amounts of storage available on our modern smartphones, most of us have gotten into the habit of unconsciously snapping photo after photo, not giving a second thought to what that behavior might “cost” us. And that’s exactly what inspired a group of us at Avast to answer a higher calling to curiosity. We started digging deeper, asking more pointed questions, and as a result, kicked off a unique photo research project. Now that we’ve crunched the numbers, we’re left with some very interesting snapshots – if you’ll pardon the pun – of how we humans use our digital devices to capture our most memorable (or not-so-memorable!) moments in megapixels.

We looked at how many bad, wasteful, and duplicate photos our users detected using Avast Cleanup for Android. We found out how many poor-quality photoswe take, and which country’s population saves the most. Most importantly, we now have an answer to the million-gigabyte question: How much space are we’re wasting, anyway? of us have gotten into the habit of unconsciously snapping photo after photo, not giving a second thought to what that behavior might “cost” us. And that’s exactly what inspired a group of us at Avast to answer a higher calling to curiosity. We started digging deeper, asking more pointed questions, and as a result, kicked off a unique photo research project. Now that we’ve crunched the numbers, we’re left with some very interesting snapshots – if you’ll pardon the pun – of how we humans use our digital devices to capture our most memorable (or not-so-memorable!) moments in megapixels.

If you haven’t read part 1, do that now. If you’re all caught up, read on.  And, click the infographic above to view all the details.

What qualifies as a bad photo? Our Avast Cleanup for Android app comes with built-in detection for blurry, poorly lit, oversaturated, and even completely dark photos (the ones you sometimes take in your pocket inadvertently). Or maybe you accidentally hit “burst mode” and take 20 duplicate or nearly identical photos.

We found that on Android phones, an average of 6% of the photos were poor quality, blurry, or completely dark. Additionally, 16% of the photos could be considered duplicates. 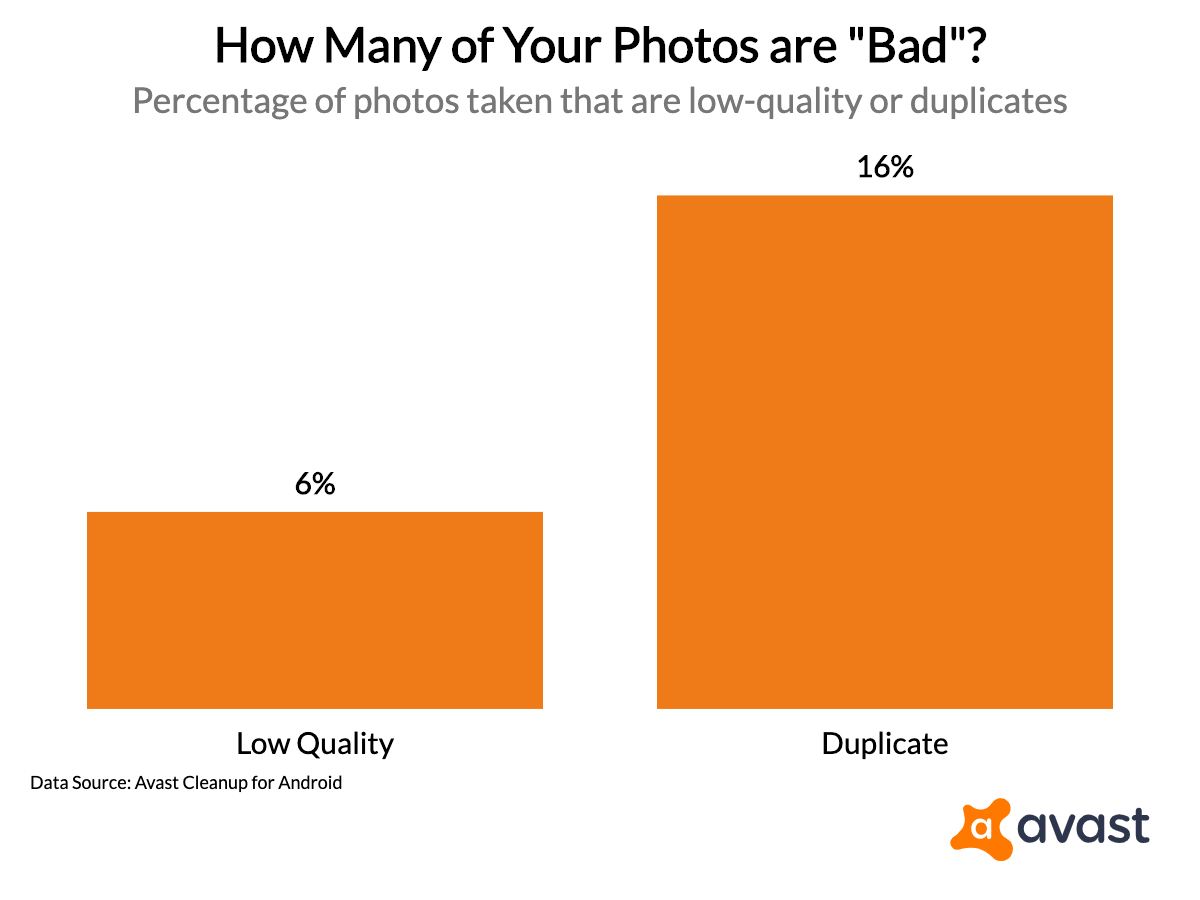 Combined, 22% of saved photos are either low-quality or a duplicate. On average our Avast Cleanup app users had 952 photos on their phones – but you may have many more. Of these, there were 58 low-quality photos and 154 duplicate photos, on average. Since the average photo is about 3 MB in size, our users were wasting about 636 MB of phone memory.

This can be even more when it comes to the latest smartphones. My phone’s 12-megapixel camera means every shot weighs a hefty 10-12 MB. In this specific case, you’re easily looking at more than 2 GB of wasted storage space on your phone.  To put that in perspective, that’s like downloading 2 HDTV episodes of Game of Thrones.

Given that space can be in short supply on a phone (more on that below), we recommend that you delete these redundant photos on a regular basis.

What most users don’t know is that a popular messenger app is also a critical storage hog. In WhatsApp protocol, every time you receive an image, GIF, or screenshot, it gets automatically stored on your phone. Our study revealed that, on average, our users had 292 WhatsApp  images stored on their phone.

Another key problem area: On average, we store over 86 screenshots on our devices – shots of your screen that you save for later or take to share with friends. Screenshots can take up a lot of space, especially when your phone is running at higher resolutions. Case in point – the above WhatsApp screenshot I took consumes a whopping 12 MB on my 2,436 x 1,125 pixel screen!

Roughly 70% of our phones’ space is used up

Storage space on phones is still quite a premium: Our data shows that the average amount of total phone space is only 10 GB, indicating that a majority of users worldwide still have 8 GB of built-in memory. Out of those, around 3.1 GB are free.

Looking on a country level, phones in the US have more space, averaging at 22 GB (indicating that 16 and 32 GB phones are the most common found in the US), only 7 GB are free.

In other words: With an average photo size being around 3 MB, a thousand photos – especially duplicates and blurry ones – can unnecessarily fill up your phone’s memory quickly.

So how much space is being completely wasted on poor-quality and duplicate photos? The global average is 22%. Here is how it breaks down by country: 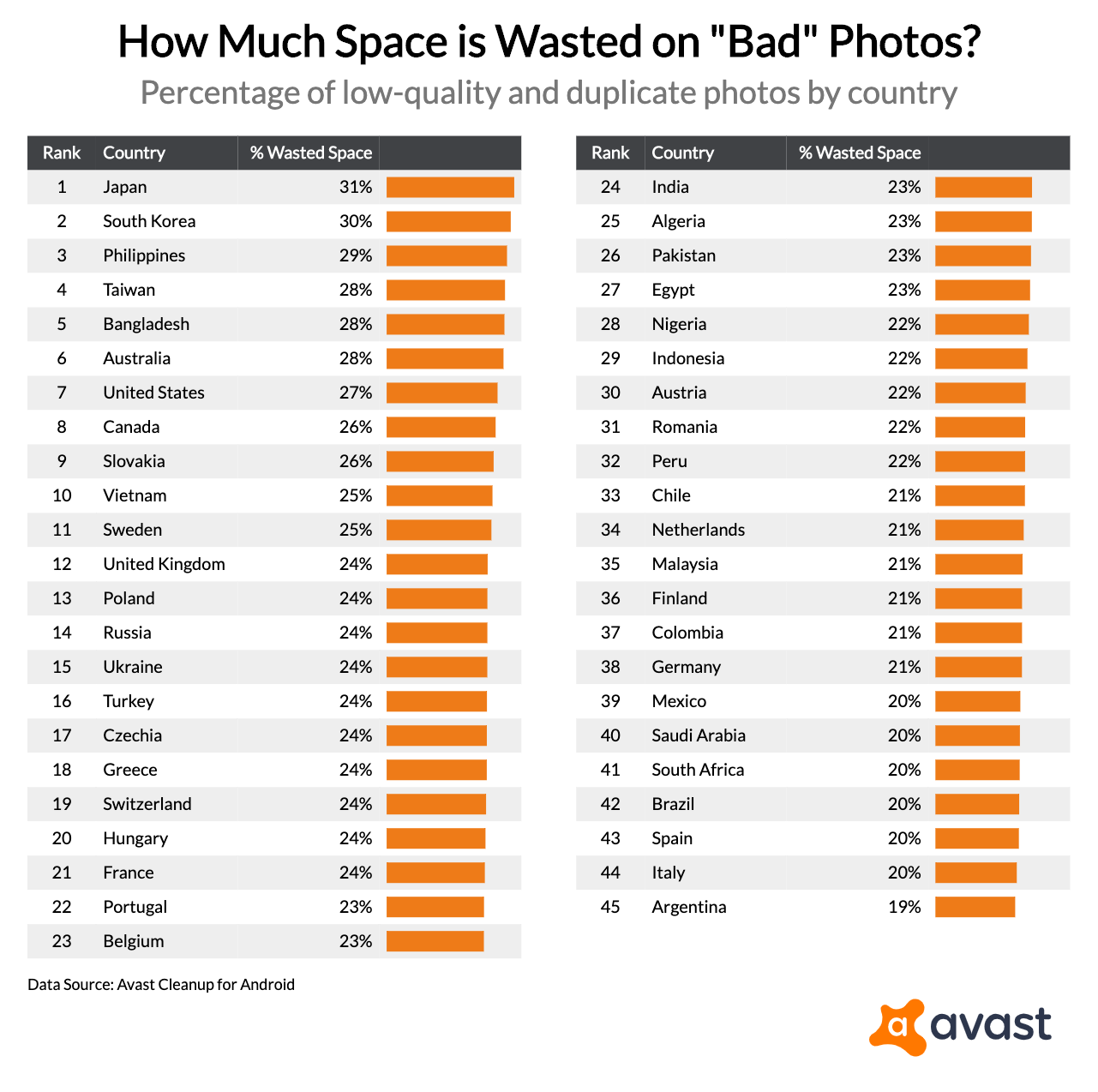 For people from Japan, over 30% of their phone’s storage might be wasted with low-quality and duplicate photos. In almost every country we studied, just by deleting their poor-quality and duplicate photos, users can free 20% or more space on their phone, something our app easily does. Even in Argentina, the country with the lowest rate of photos that should probably be deleted, cleaning the unnecessary images from their phones could save up to 19% of their memory space.

Attack of the clones

Another scourge of storage is duplicate photos. Perhaps you take 20 different photos in an attempt to get the perfect shot for a social post. You’ll likely forget to delete the outtakes, and they take up valuable space. The next chart shows the countries with the highest volume of “duplicate” photos: 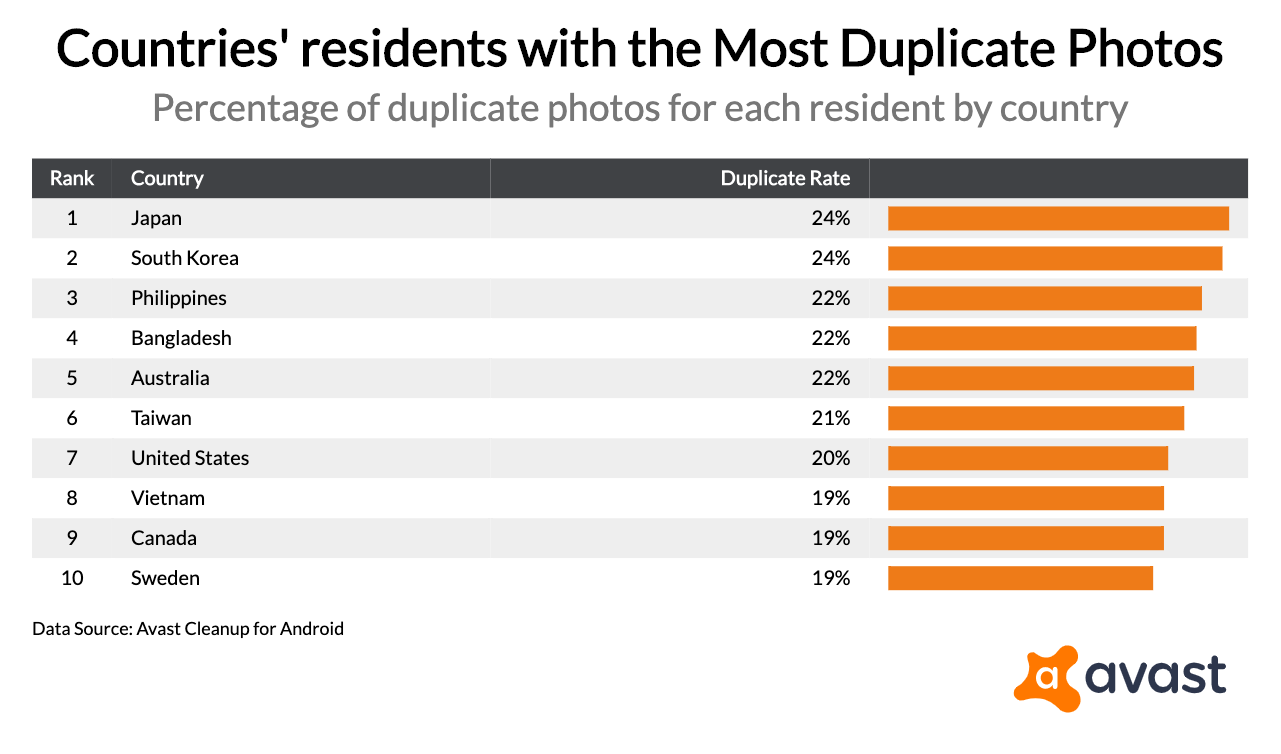 For users from Japan, nearly a quarter of photos stored are considered duplicates – 50% higher than the global average. Respectively, South Korea and the Philippines rank #2 and #3 in terms of people keeping very similar photos.

After just four weeks of usage, Avast Cleanup for Android detected 50 duplicates and 16 potentially poor-quality photos and wasteful screenshots on my phone – and I was thinking I keep things “clean” (note: I run my Avast Cleanup app every month at a minimum.)

Many of us run out of storage space on our phones and computers. We take a lot of pictures (see Part 1 of our study to learn who takes the most photos) and download a lot of apps. But getting phones with more built-in storage is expensive. 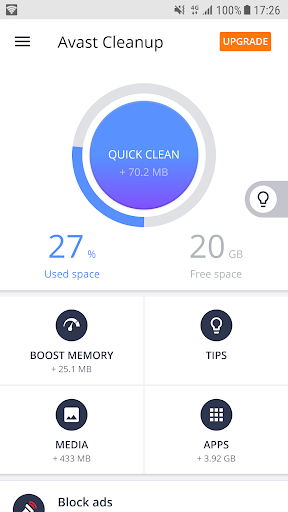 Globally, one trait we share is this: We take a lot of digital photos and don’t delete enough of them. If you don’t want to waste hours going through your library and deleting all those screenshots, WhatsApp photos, low-quality shots, or duplicates, get our free Avast Cleanup for Android. Now you have more memory for the memories that matter!

*** This is a Security Bloggers Network syndicated blog from Blog | Avast EN authored by Avast Blog. Read the original post at: https://blog.avast.com/how-many-of-the-photos-that-we-store-are-bad

The Joy of Tech® ‘Meds For Surviving The US Election’