The Southern District of New York brought charges on 18 people for their involvement in an ATM Skimming ring that planted hundreds of skimming devices in at least 17 states and stole more than $20 Million dollars.  Those charged, from the DOJ Press Release about the ATM Skimming organization, are listed below.  The operation involved many cooperating agencies, including the FBI, Customs and Border Protection, the NYPD, the US Postal Inspection Service, INTERPOL-Rome, INTERPOL-Mexico City, and Mexico’s Agencia de Investigación Criminal and Instituto Nacional de Migración.

What the press release does NOT make clear is the ties to Intercash, the largest Romanian ATM Skimming ring in history, and the primary reason that when you see “Skimming arrests” in the United States, they will almost always involve Romanians.

LIMBERATOS, COSTEA, LYMBERATOS, ELIOPOULOS, SAMOLIS, LAM, and MIHAILESCU were arrested in and around Manhattan on October 10, 2019.

MARTIN (Pictured here as “Florian M”) was arrested in Cabo San Lucas, Mexico.  Although he was the only one charged in the SDNY case, he was actually arrested as the leader of a group of 7 Romanians all arrested together in Mexico.  In Romanian news, he is described as “the brother of Rechinu”.  Rechinu, which means “shark” in Romanian, is believed by the Romanians to be the big boss of an international skimmer ring, named Florian Tudor.  Brian Krebs, the world’s leading investigative  security journalist, shared many more details about Rechinu’s gang in April 2019, in a follow-up to his three part series about Instacash – a Romanian crime syndicate that dominates the skimming world. That KrebsOnSecurity story, “Alleged Chief of Romanian ATM Skimming Gang Arrested in Mexico” includes many details learned by interviewing the brother of a bodyguard that was assassinated by Tudor.

Romanian press says that Rechinu was also a human smuggler, helping “hundreds of Romanians” migrate to Mexico using counterfeit documents and then cross the border into the United States to participate in criminal activity.  Not only did Rechinu run an enormous international crime ring, but through shell companies, he was the owner of a company in Mexico that installed and maintained ATM machines for banks in Mexico!  Using the knowledge and access his employees gained by having “legitimate” access to such equipment, it is no wonder that InterCash dominated the skimming market!

Tudor Florian has managed his network, most of the time, in Mexico, under the screen of some companies that set up ATMs and ensure their maintenance! On the legally installed ATMs, skimming devices were mounted, which copied the cards of the people who were making money.

“After fraudulently obtaining the computer data, teams were made up of other members of the group who traveled to other states such as USA, India, Paraguay, Indonesia, etc., from which they withdrew the existing amounts of money in the bank accounts related to electronic payment instruments. copied ”, claims DIICOT.  — Translated from the Libertatea.ro story “DIICOT Release: The Shark Clan in Craiova had companies that legally set up ATMs in Mexico, where they later cloned the cards!“

(Libertatea – “Freedom!” – ran a month-long series of investigative reports about this crime family that they dub “the Shark Clan”, including their long involvement with another Romanian crime family that sold them underage girls for sex trafficking) 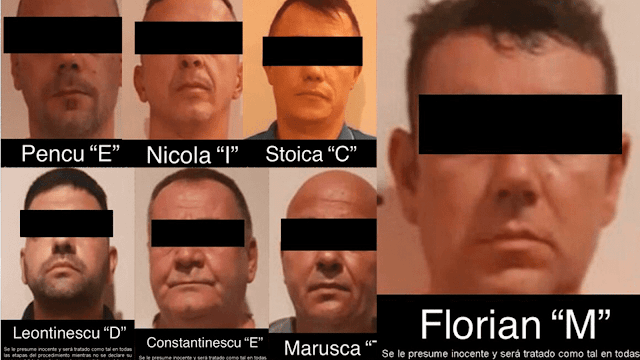 VIDRASAN was arrested in Perugia, Italy.

PETRESCU, DIACONU, ANCA, and ULMANU were already in custody on other charges and will be later transferred to New York.

*** This is a Security Bloggers Network syndicated blog from CyberCrime & Doing Time authored by Gary Warner, UAB. Read the original post at: http://garwarner.blogspot.com/2019/10/18-members-of-atm-skimmer-gang-arrested.html