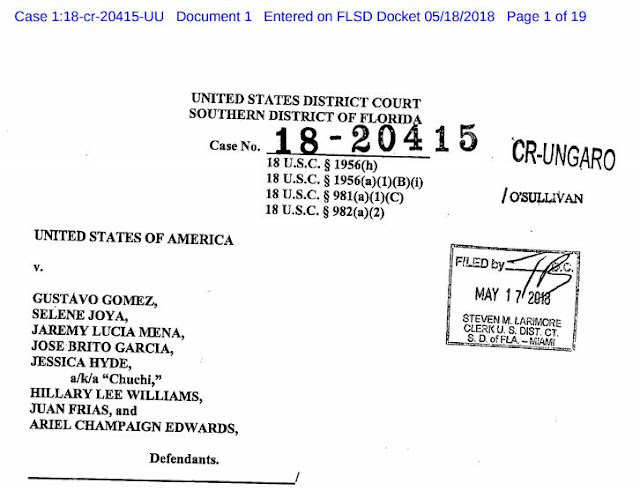 The indictment begins with the statement:
“Roda Taher, aka Ressi, aka Rezi, hereinafter Taher, was the manager and supervisor of a criminal organization that engaged in money laundering by utilizing money mules and recruiters in the Southern District of Floirda, in other place in the United States, and in foreign commerce.”
It then introduces our cast of characters.  As in South Florida case 1 and case 2, each of the players is recruited and instructed to set up a shell company, incorporating it in Florida, and establishing corresponding bank accounts with which to receive the proceeds of various Business Email Compromise and Spear Phishing attacks which fool company employees into wiring funds or transferring them via ACH, into the shell company accounts.
Defendant #1: Gustavo Gomez, b.1985, incorporated AG Universal Links in Hollywood, Florida.
Defendant #2: Selene Joya, b. 1990, incorporated Joya Star Life, Inc. in Miami Gardens, Florida.
Defendant #3: Jaremy Lucia Mena, b. 1992, incorporated Jaremy International, Inc. in North Miami, Florida.
Defendant #4: Jose Brito Garcia, b. 1981, incorporated Brito Commercial Products, Inc. in Hollywood, Florida.
Defendant #5: Jessica “Chuchi” Hyde, b.1987, incorporated Hyde Quality Inc. in Cutler Bay, Florida.
Defendant #6: Hillary Lee Williams, b. 1992, incorporated H Lee W Trade Group Inc. in Miami, Florida.
Defendant #7: Juan Frias, b. 1985, incorporated Ocean Surplus, Inc. in Miami, Florida.
Defendant #8: Ariel Champaign Edwards, b. 1991, incorporated Ariel Prime Trades Inc. in Miami, Florida.
Gustao Gomez worked closely with Roda Taher and other recruiters to recruit money mules and coach them in the manner in which they should set up their bank accounts.  According to the indictment:
“The recruiters would instruct money mules to open bank accounts in the name of their shell companies at various banks in the Southern District of Florida and elsewhere, and to falsely tell bank representatives that their shell company was a legitimate business engaged in the sale, import, or export of goods.  Taher and his recruiters gave different money mules a variety of false and fraudulent explanations regarding the nature of their businesses, including the sale, export, or import of textiles, furniture, electronics, or other goods.  However, the shell companies would not conduct any legitimate business.”
“Once a money mule had opened a shell bank account in his or her shell company’s name, those accounts would receive wire transfers of the proceeds of various fraudulent schemes.  The fraudulent schemes included, primarily, but were not limited to, email hacking or spoofing, also known as business email compromise and spearphishing scams.  Co-conspirators would hack into a victim’s email account or otherwise take over that account without permission.  In a variation of this scheme, co-conspirators would “spoof” or create a fraudulent email account that was made to look like a victim’s real email account.  The co-conspirators would then send email messages via the hacked or spoofed email accounts to individuals or corporations, instructing them to wire large sums of money to the money mules’ shell bank accounts.”
Roda Taher and the other recruiters would notify the mules when funds would be arriving into their accounts. These communications were primarily via the mobile phone encrypted messaging service WhatsApp.  They would be given instructions on what amounts would be received, where to wire the funds, and what commissions they were allowed to withdraw.  The commissions would be split with their recruiter, while the wires often sent the bulk of the money to China, Poland, and other destinations.
When banks closed the accounts, Taher would instruct the mules to open additional accounts at other banks.  Top performing mules were invited to become recruiters by inviting others to join the scheme as mules.  Recruiters received a percentage of the proceeds from the work of each mule they recruited.

The transactions particularly mentioned in the indictment are listed here.

* – Worth noting that “Huge Elite Limited” in Shanghai, China was also the recipient of ill-gotten gains from Bryant Ortega in “Part 2.”
This case is much “fresher” than some of the others.  The first arraignment in the case being Gustavo Gomez’s appearance on May 31, 2018.  Gustavo just bonded out on June 11, 2018, for $50,000 posted by his girlfriend’s brother.

*** This is a Security Bloggers Network syndicated blog from CyberCrime & Doing Time authored by Gary Warner, UAB. Read the original post at: http://garwarner.blogspot.com/2018/06/operation-wire-wire-south-florida-cases_13.html

How to Outplay the Ransomware Playbook
Widespread Threats Target Automotive Companies
$150M Stolen in ‘Imaginary Money’ Crypto/DeFi Hacks
Security Hygiene, Posture Management Remain Challenging
What to Look For in an MDR Provider
How to Reduce the Financial Impact of Cyberattacks to Your Business
DDOS Attacks Targeting Payment Services of Global Financial Institutions
All Sectors Should Expect A Holiday Cyberattack Surprise
Cl0p Ransomware Gang Tries to Topple the House of Cards
How to Protect Yourself Against Trojan Source Unicode Attacks with Nexus Firewall