The story that stuck with me most came from Greg Moore, director of safe programs for the Tenderloin Community Benefit District. Last month, he was walking at Turk and Hyde streets when he saw a driver in a sport utility vehicle waiting at a red light doze off. The passenger’s head began nodding, too. The driver’s head bounced, and his eyes rolled back. Moore knew both people in the running car were overdosing. Fortunately, the passenger was able to put the car in park before passing out. Two people injected the driver with Narcan, but it didn’t work. Somebody called 911, and paramedics revived the driver, Moore said. He said he doesn’t know whether the passenger made it.

Reportedly 712 city residents died in 2020 (about triple the number killed by COVID-19) from the drug epidemic.

This is not just about one city, however, but a national expansion westward as has been predicted since at least 2016. 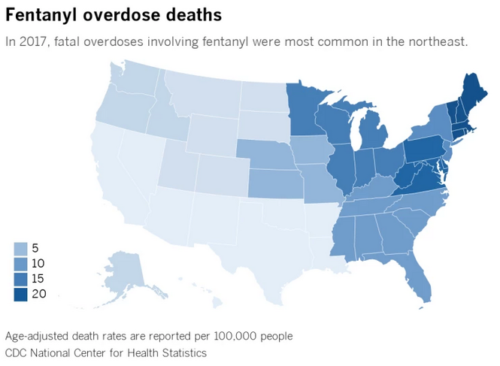 Over 100,000 Americans (about 10,000 in California) were killed by drug overdose in the past year. It has reached a new record high, a massive 29% increase from prior year, with over 60% of deaths by the synthetic opioid fentanyl. Meth overdose deaths went up nearly 50% at the same time. For comparison, meth overdoses in 2020 recorded far more deaths in Fresno County, California than the total combined number of homicides and suicides, one and two-vehicle crashes, fire, falls and drowning. 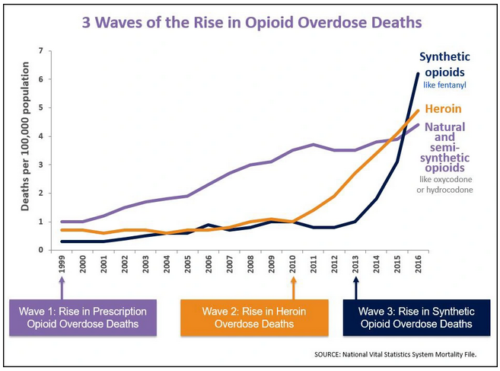 It’s tempting to blame China, given the economics of American consumption, yet “a primer on fentanyl(s)” debunked that right away in 2018:

…there’s nothing magical about China. India also has skilled chemists and a huge flow of mail to the U.S. So, for that matter, does Canada. And so does the U.S.; if international sources dry up, the stuff will, once again, be made here.

San Francisco is now suffering from a wave that has swept across the whole country, so the real question is whether noise from the Tenderloin will catalyze the kind of change that needs to happen at a national level.

*** This is a Security Bloggers Network syndicated blog from flyingpenguin authored by Davi Ottenheimer. Read the original post at: https://www.flyingpenguin.com/?p=36917