by Davi Ottenheimer on September 3, 2021

Details found in the U.S. ODNI reader under “Counterintelligence in WWII”

First, the Japanese are alerted by Nazis that their Ambassador’s code messages are being monitored by the U.S. and “drastic steps should be taken” in response.

STAAMAA called me this day (evening?) and stating that this request was to be kept strictly secret, he said that Germany maintains a fairly reliable intelligence organization abroad (or in the U.S.?), and accordingly to information obtained from the above-mentioned organization it is quite (or fairly?) reliably established that the U.S. government is reading Ambassador Nomura’s code messages, and then asked that drastic steps should be taken regarding this matter.

What did he mean by Germany having a “fairly reliable intelligence organization abroad (or in the U.S.)?” A big hint came in September of 1941.

In May 1940, a shortwave radio transmitting station operated by FBI agents on Long Island established contact with the German shortwave station abroad. This radio station served as a main channel of communications between German spies in New York City and their superiors in Germany for 16 months. During this time, the FBI’s radio station transmitted over 300 messages to Germany and received 200 messages from Germany. The successful prosecution of the 33 German agents in New York demonstrates Sebold’s success as a counterespionage agent against Nazi spies in the United States. Of those arrested on charges of espionage, 19 pleaded guilty. The 14 men who entered pleas of not guilty were brought to trial in Federal District Court, Brooklyn, New York, on September 3, 1941, and they were all found guilty by a jury on December 13, 1941.

Of course December 13 was barely a week after the December 7, 1941 attack on Pearl Harbor.

Second, this is all somewhat of an important backdrop to the communication in November from Ambassador Nomura to Tokyo about overthrowing the U.S. government by fueling the “America First” platform of sedition (as illustrated by Dr. Seuss) 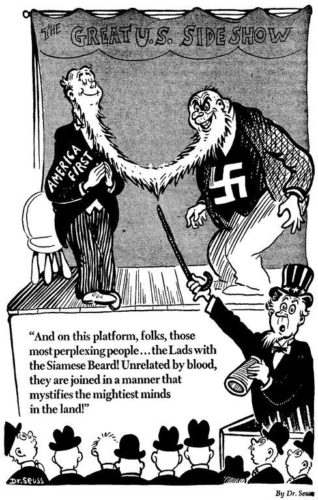 ROOSEVELT has the full support of the government, the military, and the Congress and is tantamount to a dictator (on the 10th, the Times Herald said in an editorial that ROOSEVELT is a dictator in no way less than HITLER or STALIN). The people, however, most certainly do not support ROOSEVELT. During the last two or three weeks this has been particularly evident. Let us look into some concrete examples: According to reliable reports the leaders of the America First Committee are secretly endeavoring with all their ingenuity to impeach ROOSEVELT. The stronger government pressure against it becomes, the more belligerent does this committee grow, and it may well be that the time will come when they will resort to force. The pressure of the government against the America First Committee is also becoming fierce. On October 30 in New York, there was a meeting of this committee, but they could not make any radio broadcasts. ROOSEVELT’s own life is in grave danger. On that night in Madison Square Garden, the immense crowd totally 8,000 filled the building to overflowing.

Yes, the Japanese really said Roosevelt is “a dictator in no way less than Hitler or Stalin” and predicted he might be killed by terrorists from the “America First” campaign backed by Hitler.

This of course begs the question of how different was Stalin’s relationship with Hitler than Roosevelt or Churchill for that matter.

After all, why would Hitler relentlessly use military intelligence to attack Roosevelt instead of doing infamous dictatorship deals where Stalin was so eager to please?

Two versions of World War II were always available, because the Soviet Union fought on both sides of the war. From 1939 to 1941 the Soviet Union was a German ally, fighting in the eastern theatre and supplying Germany with the minerals, oil and food needed to make war against Norway, Denmark, the Netherlands, Belgium, Luxembourg, and most importantly France and Britain. During this stage of the war Stalin was eager to please Hitler, and in general fulfilled not only obligations of the Molotov-Ribbentrop pact and the Treaty on Borders and Friendship but also specific requests of his German ally.

Third, “America First” became synonymous during WWII with sedition. There was little debate remaining on this matter as the courts prosecuted its membership.

Trying to work for Hitler while the country was at war with him made the definition of sedition hard to argue.

LaGuardia, as Mayor of NYC during WWII, for example ordered unrepentant Nazis out of the police.

In case the Drew name isn’t familiar, it was a high-profile news story at the time of a policeman connected with nine people conspiring to commit sedition (e.g. “America First”).

Dr. Seuss again illustrated the problem of the connections. 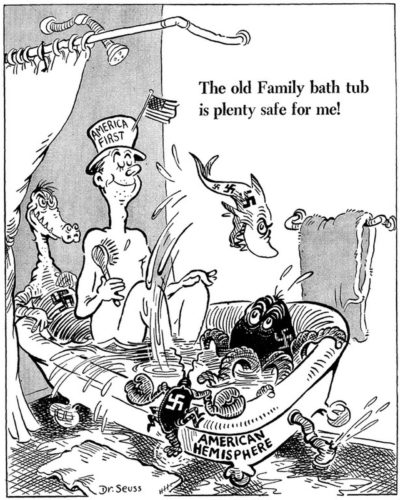 Even during the war, “America First” threatened political outbreaks based in anti-Semitic violence and demanded the president be replaced with a “true ‘nationalist’”. 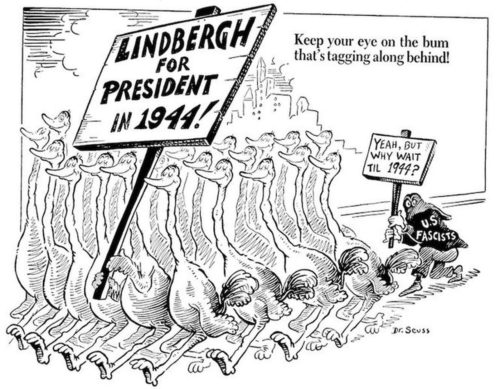 Food for thought given people today seem to forget history and wonder aloud how “America First” could be anything but sedition.

*** This is a Security Bloggers Network syndicated blog from flyingpenguin authored by Davi Ottenheimer. Read the original post at: https://www.flyingpenguin.com/?p=35105