When the events of January 6th unfolded, a hot-take was posted by a DefenseOne executive editor immediately declaring no coup because:

Coups don’t come without any military, police, secret police, or armed forces of any kind on their side.

As someone who has studied coups for decades, I nearly spit my tea. It seemed so brazenly premature in analysis, not to mention so very easily and likely to be proven wrong, I couldn’t believe my eyes.

Should you remain silent, you will be complicit in a coup d’état. You were rightly criticized for your prior active complicity in the president’s use of force against peaceful protesters in Lafayette Square. Your passive complicity in an extralegal seizure of political power would be far worse.

Perhaps DefenseOne’s editor was taking the important step of not remaining silent, a good one, yet the wrong one by trying to falsely predict the lack of police or military involvement.

If not “any military, police, secret police or armed forces of any kind” then who exactly did they predict would be charged instead? He did not say, which itself is kind of strange.

In other words, would there even have been an attempt at coup this time around (which I have argued actually started in 2016, based on a long history of domestic coups in America) if it had not directly involved police and military ranks? Was it not simply a repeat of history?

Fast forward to today and the news has become, as one might have reasonably expected, about the increasing numbers of domestic military and police caught trying to end American democracy.

At least 52 active or retired military, law enforcement, or government service employees are among the over 400 suspects arrested for their alleged actions at the Capitol, according to an ABC News investigation based on military records, court records, interviews, and publicly available news reports. The arrests include over half a dozen ex-police officers and multiple former elected officials — and represent some of the most significant and violent charges brought in connection with the deadly insurrection.

And perhaps the more crucial analysis, the American police and military experience is cited as a “natural path into the world of [anti-American] militias”:

According to a report from Georgetown’s Project on Extremism, military individuals who participated in the attack on the Capitol were about four times more likely to be involved in domestic extremist organizations, such as the Proud Boys or Oath Keepers, which are now being probed by the Justice Department over their alleged role in helping plan and carry out the assault on the Capitol. The Georgetown group identified 43 alleged Capitol rioters as having military backgrounds, and said that more than a third of them were affiliated with violent extremist organizations. Some of those arrested said that their past experience provided a natural path into the world of militias. Laura Steele, an alleged Oath Keeper who’s been charged as part of a sweeping conspiracy case against the paramilitary group, boasted about her previous law enforcement experience in her application to the group, according to court records

And on that note, I leave you with this data on just how many in the military today are affiliated with anti-American extremist ideologies. 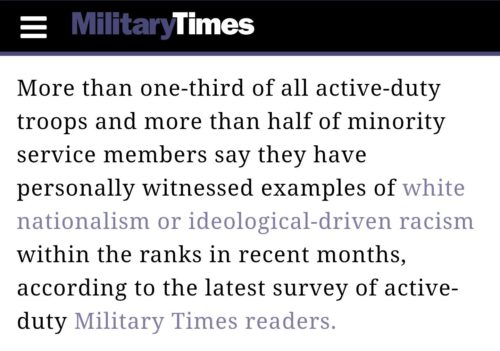 *** This is a Security Bloggers Network syndicated blog from flyingpenguin authored by Davi Ottenheimer. Read the original post at: https://www.flyingpenguin.com/?p=33113