A long time ago, what seems like a hundred years from today, I wrote a post called “1873 Slaughterhouse Cases Explain US #Covid19 ‘Anti-Mask’ Cultism” to explain why Americans are so slavishly (pun not intended) obsessed with refusing to wear a simple safety mask that benefits society as well as themselves.

Today we have multiple examples of this manifesting in violent “biker” culture, as aggressive fringe groups and criminal syndicates operate campaigns to undermine rights by campaigning for suicidal anti-freedoms.

I don’t use the suicide phrase lightly, as just the other day I was sitting down with a biker (yes, I ride) who proudly explained his machine to me — an open fat drive belt by his ankle “sometimes rips pants off”, situated just in front of a giant “suicide shift” lever topped by a skull. He said he made it all so hard to operate safely it prevented anyone from stealing his ride and living to tell.

Imagine a guy thinking he needs to make his seat so miserable for others they wouldn’t dare try to steal it from him, devaluing it entirely while at the same time bragging about what a supremacist he is for being able to keep power out of the hands of others. Here’s how HD Forums describes the suicide shifter lifestyle: 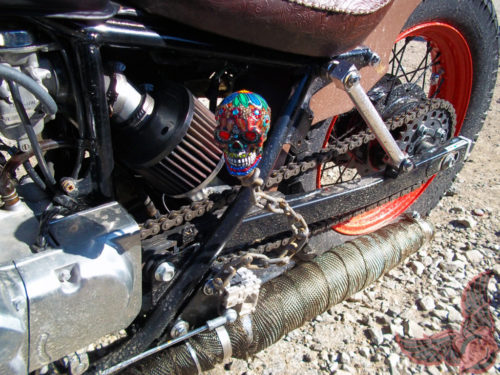 Now, I realize there are plenty of semantic arguments about what constitutes a “suicide” shifter. But for the sake of this question, let’s just say the term refers to a hand shifter, rather than the conventional foot set up which became standard around the end of the Eisenhower administration.

Do you know what else became standard around the end of Eisenhower administration? Desegregation meant to allow blacks to have a seat.

As we talked I noted this guy had hung on his wall a framed Confederate dollar above a picture of Ronald Reagan, which clearly to him represented the same thing.

In other words, do you want to ride a motorcycle safely for yourself and everyone around you? They hate that. Do you want to be free of mindless assaults and horrible designs of a simplistic/selfish predator? Some in society violently disagree and are more than ready to kill you and themselves as a “protest” against such asinine freedom (of course fraudulently calling it a defense of freedom when they deny freedom to you).

This is like asking do you want the freedom to drink water without known poison, or breathe air without known toxins? Allegedly there are restaurant and factory owners who ride bikes and demand their “god given” right, above any governmental interference, to deny everyone else any freedom from harm.

These are the people who see themselves as individual victims of concepts of society, fighting against everything always, angry at the world. The idea that someone could be given kindness or spared a dangerous moment without some kind of divine intervention or having to pay a huge price… is an unthinkable one.

Such perpetually dis-satisfied and unhappy people are in a constant state of anger at the world.

They ride without helmets, emitting noise and pollution, smoking cigarettes… and thus it is no stretch (pun not intended) that just like all the other ways to do harm since 1873, they can’t put on masks even today if they think it would help someone else. If it helps them directly (e.g. avoid being identified and held responsible for their actions) they have no hesitation to put on a mask. However, in terms of helping society… about as likely as that guy taking Ronald Reagan’s portrait off his wall. For them it is only one more thing to be angry about.

*** This is a Security Bloggers Network syndicated blog from flyingpenguin authored by Davi Ottenheimer. Read the original post at: https://www.flyingpenguin.com/?p=32414