Something I’ve always known about Tom Cruise is that he is a fake. Literally. He is a paid actor, who makes a living from being a fake. He is highly paid because apparently his fakes are so good.

Now comes a stark warning that evidence has been found of Tom Cruise, the fake, being faked.

Was Tom Cruise a threat to society already as a fake? The article doesn’t bother to address this very important and simple problem with its analysis.

It all begs the question of why should we be comfortable and trust a fake like Tom Cruise up until now, but then worry about someone else’s fake of his fakes. 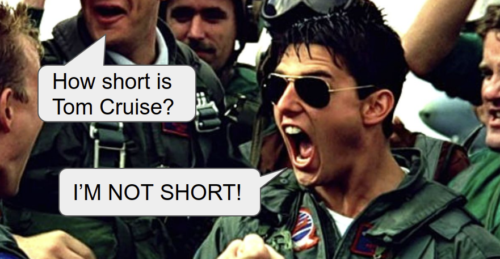 If we could achieve trust of one fake (a Scientologist of all things, who peddles in fake beliefs), why not achieve trust in the fake of that fake? Or maybe another way of asking it is who really is scared by a world where a Tom Cruise fakes being tall, or fakes being a Navy pilot?

Hint: some may be “scared” by the idea of agency and voice being held by those not in power, such that someone who doesn’t appear physically to be Tom Cruise can now have the same power that used to be reserved for Tom Cruise (thanks to technology, just like the technology Tom Cruise used to appear taller than he is).

In some sense, Tom Cruise is someone who battled with perception his whole life. He transformed his own physical appearance from something mundane into an unbelievable physical representation, thus mastering the art of a fake. Yet people celebrate him.

I’ve written about all this security theater before, and I continue to find it amusing that it is a security issue literally about theater that doesn’t seem to recognize the disconnect.

Additional food for thought: Americans have been spreading loads of fake traitor General Lee art after the Civil War. This is about the same as Americans erecting monuments to Osama bin Laden after 9/11. If anyone thinks the danger is new for Americans believing something is real that instead has been entirely faked… have I got some real news about scary times we’ve been in for over 100 years!

*** This is a Security Bloggers Network syndicated blog from flyingpenguin authored by Davi Ottenheimer. Read the original post at: https://www.flyingpenguin.com/?p=32234