While the impressively huge Aircraft Carrier was a decisive platform in past wars, I can’t help but think about it in terms of a commoditization line over history.

This is the path from 1960s drone war being conducted on a mainframe in a few high-security buildings to warfare today all being done using mobile phones in everyone’s pocket.

Take the core concept of the “carrier” and in today’s commodity technology terms I believe you get an autonomous sea box of tiny drones ready to swarm.

One of the lessons of the 1980 failed operation Eagle Claw, for example, was they came up one single aircraft short of a complete mission.

Imagine telling that story instead where the numbers of aircraft launched from sea are no hurdle at all — opposite problem really, as you have surplus of highly operational units.

The sea launch platform already was pioneered a while ago by submarines launching drones out of their missile tubes. And the Navy many years ago was manually launching swarms of 50 drones. Surely by now they’ve combined these two advances into tubes at sea having a magazine attached.

Now flatten the carrier to waterline (e.g. into a Low Visibility Craft or LVC) to remove its target profile, and with a towline attach a submarine filled with sensors and tubes of hundreds or thousands or drones.

It would look like a fatter version of the 2016 Wave Glider submersible by Liquid Robotics. 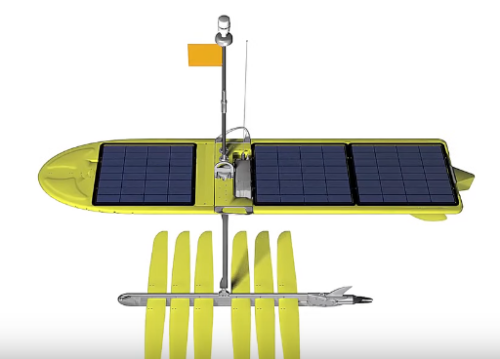 Also I can’t help but mention this is very similar to what was being designed in the late 1800s and even demonstrated by Tesla himself, so we’re on a very late cycle of adoption (postponed by WWI emphasis on maintaining control over petroleum distribution).

The drones could launch undersea or on surface. Either way it’s a far more modern take on an old solution, for an even older problem in warfare.

*** This is a Security Bloggers Network syndicated blog from flyingpenguin authored by Davi Ottenheimer. Read the original post at: https://www.flyingpenguin.com/?p=31531