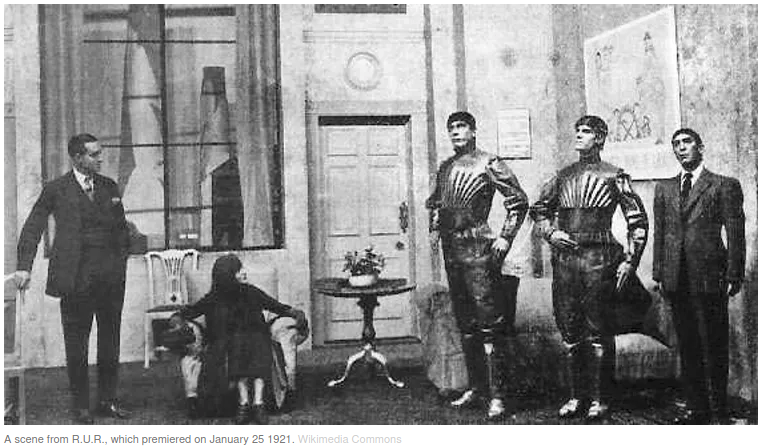 Here is the plot of a Karl Čapek play called R.U.R.: Rossum’s Universal Robots, first staged in Prague on January 25, 1921 as described in The Conversation.

A genius but completely mad scientist – with the backing of a ruthlessly greedy corporation – creates a sentient robot. The scientist’s intentions for the robot are noble: to help us work, to save us from mundane tasks, to serve its human masters.

But the scientist is over-confident, and blind to the dangers of his new invention. Those that prophesied such warnings are dismissed as luddites, or hopeless romantics not in step with the modern world. But the threat is real: the intelligent, artificial being is not content being a compliant slave.

Despite knowing that it is somehow less than human, the robot starts to ask complex questions about the nature of its own being. Eventually, the robot rises up and overthrows its human master. Its victory points to the inevitable obsolescence of the human race as they are replaced by their robot creations, beings with superior intelligence and physical strength.

The most important point in the article discussing the play is this line:

Some of these themes (the hubris of the mad scientist, the inevitability of our creations destroying us) can be traced to earlier stories, such as Frankenstein.

The Conversation article is written to post the question of why we might still be afraid of robots even after 100 years, yet it also points out the root of the problem goes back to Frankenstein, which itself comes out of Wollstonecraft’s philosophical teachings of the 1700s.

The answer is right in front of the author. It can be put quite simply, as Wollstonecraft wrote in her day (and I explain in my security presentations), the same reason white men still fear power transfer to women and non-whites.

*** This is a Security Bloggers Network syndicated blog from flyingpenguin authored by Davi Ottenheimer. Read the original post at: https://www.flyingpenguin.com/?p=31363