On July 27, 2020, the North American Electric Reliability Council (NERC) released an updated mapping of the Critical Infrastructure Protection (CIP) Reliability Standards to the National Institute of Standards Framework for Improving Critical Infrastructure Cybersecurity, commonly known as the NIST Cybersecurity Framework (NIST CSF). The newly released mapping will be a useful tool for those organizations within the electric power and utility industry that must adhere to NERC CIP compliance.

Previous mappings of NIST CSF to NERC CIP had become obsolete with an updated version of the CSF released in April of 2018. This coupled with new standards as part of NERC CIP over the years rendered previous mappings to be no longer useful.

As background, the NERC CIP Reliability Standards derive from the Federal Energy Regulatory Commission (FERC) Order No. 706, which was issued in January of 2008. The CIP Standards have been updated over the past twelve years to address the constantly evolving types of cybersecurity threats to the bulk electric system (BES).

At present, the CIP Reliability Standards consist of 13 standards that specify a set of requirements that registered entities must follow to ensure the cyber and physical security of the bulk power system. Currently, there are 10 active cybersecurity standards and 2 (CIP-012-1 and CIP-013-1) that will be effective in the near future.

The Importance of Mapping NIST CSF to NERC CIP

Numerous organizations in the North American critical infrastructure energy sector must be compliant with the NERC CIP Standards. Many of these organizations have implemented the higher-level CSF separately from the more specific NERC CIP compliance requirements. By mapping the two together, an organization can be more secure and effective in assessing and implementing strong security controls. Although not as prescriptive, the controls outlined in the CSF exceed those of the CIP requirements that are more compliance based.

The recently released mapping from NIST CSF to NERC CIP will be of great benefit to the organizations in the electricity industry. The tool lists the CSF Categories and Subcategories and maps them to the specific CIP requirements. It also includes the mapping logic, as well as specific guidance for the use of the combined framework and standards. The mapping also provides a reverse approach that maps the CIP requirements to the CSF Subcategories. Examples of these two approaches to the mapping can be viewed in the following diagrams. 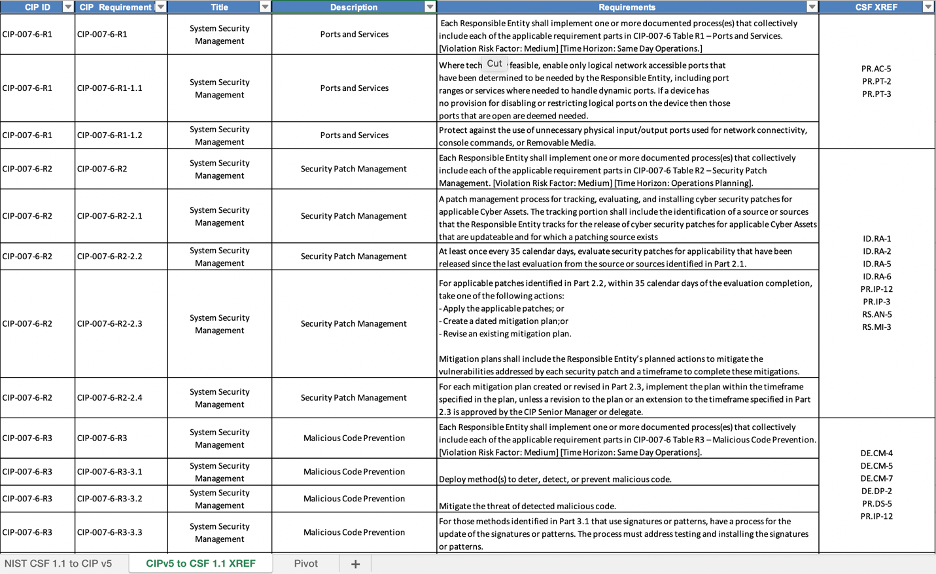 On June 18, 2020, FERC issued a Cybersecurity Incentives Policy White Paper. The white paper, which can be found on the FERC website, discusses a potential new framework for providing transmission incentives to utilities for cybersecurity investments. This new framework would review and provide benefits to those organizations that exceed the requirements of the NERC CIP Standards. FERC stated that “transmission incentives to counter the evolving and increasing threats to the cybersecurity of the electric grid may be warranted.” NERC CIP categorizes assets as high, medium, and low impact systems. While all the standards apply to the high and medium risk assets, only a few apply to the low impact assets.

The white paper outlines two paths for an organization to identity and implement cybersecurity investments. The first would call for the implementation of medium or high security controls for facilities identified as low or medium impact systems. The second approach would award incentives based on an organization implementing portions of the NIST CSF to its assets. Although the CIP standards would still be the basis for granting cybersecurity incentives, organizations would have the flexibility of non-prescriptive options from the NIST CSF that would exceed the CIP Standards.

NIST CSF in the Axio360 platform with mapping to NERC CIP 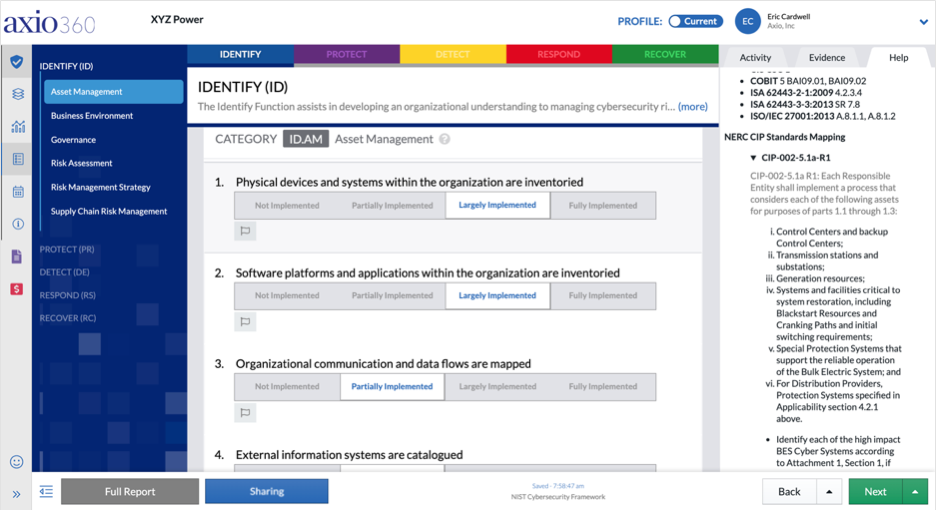 If you’d like to experience the complete functionality of NIST CSF with mapping to NERC CIP and discuss your particular use case for the framework, our experts are standing by. You can book a demo here.

About the author: Eric Cardwell is a Director of Cyber Risk Engineering at Axio

*** This is a Security Bloggers Network syndicated blog from Axio authored by Eric Cardwell. Read the original post at: https://axio.com/insights/nist-csf-as-a-lens-for-nerc-cip/

Missouri FAIL: Gov. Mike Parson says Viewing Web Source is ‘Hacking’
Killware: Hype is Bigger Than the Threat, For Now
AI Driving Foreign Influence, Disinformation and Espionage
Aqua Security Uses eBPF to Extend Security Platform
Bracing for the Data Security ‘Bang’
2021 State of Ransomware Report Reveals 83% of Victims Paid to Get Data Restored
Lessons from the Twitch leak
Why Doesn’t Peter Thiel Denounce Nazism?
DDoS attacks on VoIP and the urgent need for DDoS protection
What To Do in the Case of Brand Reputation Impersonation