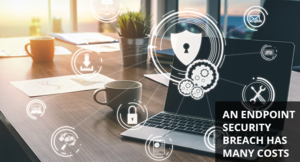 The economic impact of a successful breach is one of the easiest to quantify. It’s also increasing constantly, with analysts predicting the cost of cybercrime globally will exceed $6 trillion annually by 2021, a 100% increase from 2015. Much of this cybercrime is perpetrated on or through the endpoint, with an end goal typically of either data exfiltration or encrypting the data and charging a ransom (often it’s both).

Alongside the rising impact of general cybercrime is a stark increase in the cost of successful endpoint security breaches. According to the recent Ponemon Institute study on endpoint security risk, the average economic loss of a single successful endpoint breach is now $8.94 million–an increase of 25 percent year over year–compared to an average cost of $7.12 million in 2018.

There are a few categories of damage that fall under the cost of a successful endpoint security breach, including lost productivity, system downtime, legal costs, and infrastructure damage among others. Each of these adds to the financial impact of a breach in its own way.

According to Ponemon, the biggest economic impact that an endpoint attack has on most organizations is “IT and end-user productivity loss.” This kind of damage compounds when a company’s IT systems can’t function properly following an attack. By being unable to operate at full capacity, the company ends up losing revenue. Therefore, an endpoint attack, which can gain direct access to company-wide networks, can be particularly destructive to business operations.

Productivity loss has remained the number one cost associated with endpoint attacks during the three years the Ponemon Institute has run the study. However, its importance as a cost factor has also grown consistently. When asked to assign a relative point score to different cost factors, the average rating given to productivity loss has increased by seven (7) percent since the study began in 2017.

That is no surprise. As companies increasingly reap the benefits of digitization, cloud-based operations, and distributed workforces, the risk that endpoint attacks pose to productivity is likely to continue growing. For unprotected companies, that can be an expensive trend.

While the Ponemon study shows that the cost of damage done by system downtime is declining, it still remains the third most expensive consequence of an endpoint attack. Even though it may not be as big of a cost concern as it used to be, system downtime following a cyber attack is an increasingly common outcome.

The damage done by information asset theft, on the other hand, continues to rise. The Ponemon study ranked it as the second most significant result of a cyber attack. Its importance as a cost has also increased 3 percent since 2018. This rise comes as information assets, such as proprietary information, are becoming some of the most digitally vulnerable assets held by many companies. Often, these assets are improperly protected or not valued as high as they should be when it comes to cyber defense.

The Ponemon study ranked the costs of damage to IT infrastructure as increasing last year while remaining overall as the fourth biggest cost consequence of an endpoint attack. This can include damage to file servers such as locked data or hard drive failures from malicious code operating on them.

The costs incurred by reputational damage declined compared to previous iterations of the study. Respondents indicated that reputation or brand damage has become less costly since 2017. However, reputation damage can still be a devastating consequence of a cyberattack, particularly for smaller businesses.

Lawsuits, fines, and legal issues made up just 4 percent of costs resulting from an endpoint attack according to the study. That is an increase from 3 percent in 2018 but remains the same as the 2017 figure, which was also 4 percent. These could be anything from class action suits resulting from breaches of consumer data to regulatory fines under laws such as GDPR in Europe. Either way, lawsuits and fines remain a risk of endpoint security breaches.

The Ponemon study shows that as the average cost of falling victim to a successful endpoint attack continues to rise, the real costs are being felt across different sectors. Failing to protect their endpoints effectively is fast becoming one of the most expensive cybersecurity risks companies take. This is even more true now when so many people are working from home and often lack the additional security controls of the corporate network.