This report summarizes Contrast Labs’ analysis of real world application attack and vulnerability data from December 2019. By providing continuous insight and detection from inside applications, Contrast can identify and trend the way that attackers pursue applications and combine that with an understanding of if and when applications are vulnerable to those attacks.

By reading this report monthly and Contrast’s quarterly recap, AppSec teams can gain a better understanding of the possible types and origins of attacks and attackers.

The chart below shows how the relative likelihood of vulnerabilities reported, as well as attacks by vector last month.

While these unsuccessful attacks can be statistically common, they have little impact on the security posture for a specific application. Instead, this information can be used to provide insight into what payloads attackers are using and understand the threat landscape at large.

A successful attack on a vulnerability can have wide-scale impact across many different organizations. It is critical for security teams to know about and properly manage library vulnerabilities, while also preparing for potential attacks.

Based upon the research included in this report, Contrast Labs shortlisted vulnerabilities that pose the highest risk to organizations. The list was created by combining the likelihood of a vulnerability and an attack (see previous chart) with the likelihood of a successful exploit and an impact factor. Below you can find this month’s watch list.

The top 5 most prevalent serious vulnerabilities reported in custom code for the first time during December:

On average, Java and .NET applications reported the largest number of the following vulnerabilities:

Attacks on custom code made up over 99% of attacks last month. While libraries constitute the largest percentage of application source code, custom code makes up the largest source of vulnerabilities and attacks.

The three most common attack types in December were the same as November. We saw large increases in the number of applications targeted by all three types:

The chart below shows how the percent of applications targeted changed for each attack type month-over-month, ordered in descending attack likelihood. 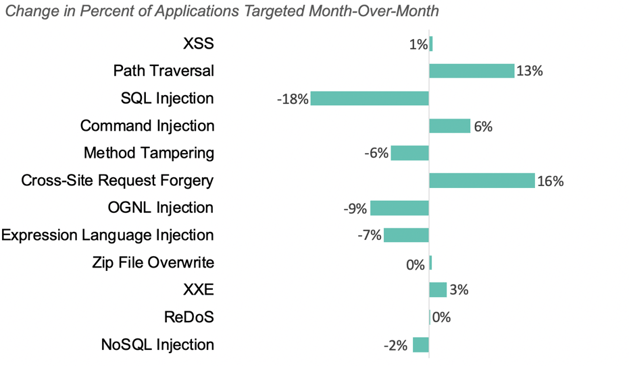 The chart below shows the vulnerability category breakdown for CVEs attacked last month.

There was a significant spike of applications with CVE-2014-0112 or CVE-2014-0114 targeted last month. Both of these CVEs resulted from a solution for CVE-2014-0094, a critical vulnerability that allows remote attackers to “manipulate” the ClassLoader via the class parameter.

The chart below shows how the percent of applications with CVEs attacked changed month-over-month, ordered in descending attack likelihood.

Attacks targeting XSS, SQL Injection, Path Traversal, and Command injections vulnerabilities were the most prevalent attacks for Java and .Net applications in December.

The charts below show the percent of applications attacked, by vector, last month for both Java and .Net applications. 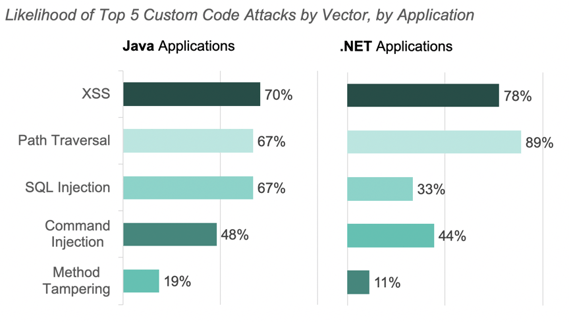 December saw attacks from 108 countries. The greatest number of attacks originated from the United States, China, India, Japan, and Canada.

Japan moved up to the 4th most common origin country from 7th last month. 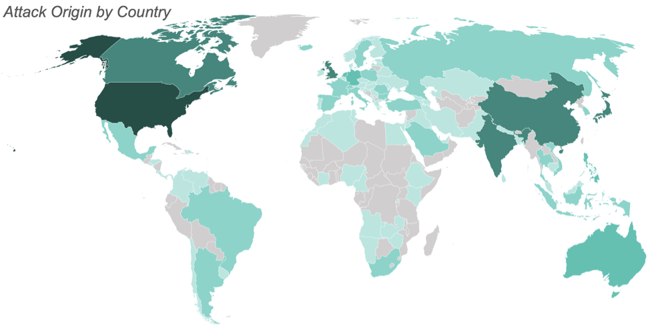