Morphisec Labs recently investigated an ongoing BitPaymer ransomware campaign that has been attacking companies across the U.S., both public and private, over the last 3 months. We are aware of at least 15 organizations targeted by the threat group during this latest campaign, spanning multiple industries, including finance, agriculture and technology. Especially interesting is their targeting of a supply chain solution provider, which may be part of a deliberate propagation strategy.

The attacks all follow a similar pattern. Initial infiltration is usually obtained via phishing emails delivering Dridex. Once attackers have a foothold in the system, they perform a full recon stage and steal AD credentials. Then, during the weekend (usually Saturdays), they deploy the ransomware onto the already compromised network. This carefully planned timing allows them to propagate the ransomware to 24/7 running servers and then spread as the first employees returning to work from the weekend login to the compromised network.

Our investigation revealed that, in many cases, organizations had advanced EDR solutions installed in place that the ransomware was able to bypass.

Upon analysis of the ransomware and the loader that executes the payload, we identified several interesting characteristics of a new framework the attackers are using to obfuscate and compile a fully custom loader on the day of the attack –  usually just 2-3 hours before the ransomware’s deployment. This makes it unlikely to be detected by antivirus and EDR tools until it’s too late. The ransomware payload itself appears to be a variant compiled 3-4 months ago, which is being reused by the loader wrapper in various campaigns, including the one that knocked out Arizona Beverages earlier this year.

This BitPaymer variant also has an interesting, innovative approach to bypass Windows Defender Emulator, as shown in the Technical Analysis below. This technique was first introduced at the 2018 Black Hat conference by researcher Alexei Bulazel and we predict that more malware will start incorporating similar approaches.

Morphisec prevents the execution of the ransomware and its propagation, including the initial vectors of Dridex and the backdoors used by the attackers that lead to this compromise.

The loader is compiled and customized for the target and includes redundant instructions, logic and assignments. After analyzing differences between samples, we believe that a new advanced obfuscation framework has been developed by the attackers, one which is highly effective at evading behavior and static analysis.

Example of delusive function from two different BitPaymer packed samples. One of them with lots of junk code while the other is thinner. In both cases it just returns False. 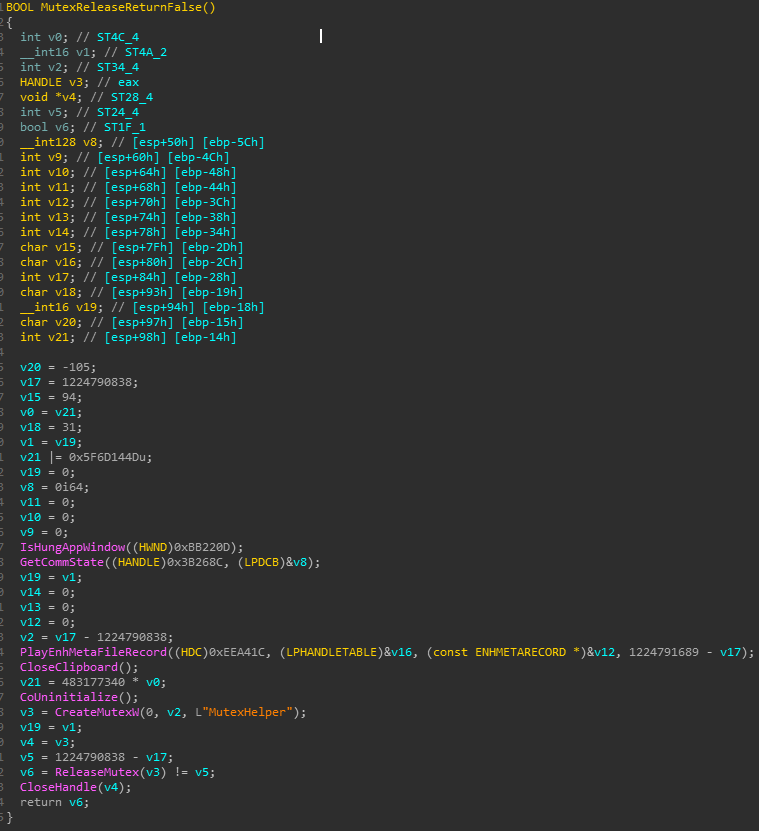 Figure 2: Same functionality as the function from Figure 1, wrapped with junk code

Before executing the function that decrypts the BitPaymer second stage payload, the loader performs OS version checks. It will run on any OS later than Vista, with some exceptions, such as older versions of Windows Server (Servers are definitely the preferred target of the group). 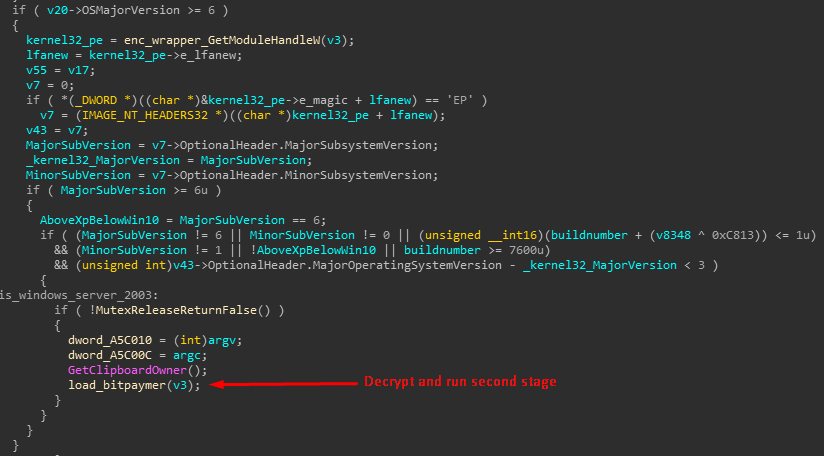 Upon loading, BitPaymer checks if the file “C:\aaa_TouchMeNot_.txt” exists. If so, BitPaymer will terminate the execution, as it is an indicator of a “goat file” in Windows Defender AV Emulator. This is an easy way to bypass Windows Defender Emulator as it always emulates the existence of the file.

Next, the malware initializes its configuration settings, such as process integrity level and decryption type. It also decrypts all of its strings (ransom note, public key, file extension, etc.) using the RC4 algorithm with a 40 byte key that resides in the beginning of ‘.rdata’ section.

Figure 6: Marked is the reversed RC4 key in .rdata section

After the Windows Defender AV Emulator check and the initialization of BitPaymer configuration, BitPaymer tries to execute itself as a service. This will be described in more detail later.

Next, BitPaymer checks if it is running as an alternate data stream. It does that by checking if the name of the file on disk ends with ‘:’.

If not, it will copy itself to a hidden alternate data stream under %APPDATA%<random_name>:BIN and create a new process with the old file path as a parameter.

The BitPaymer alternate data stream process then performs the following:

Figure 9: cmd file that will be executed from registry

The .cmd file is not deleted and so has the registry pointing to it (described in the next section)

In order to elevate privileges, BitPaymer uses a technique introduced by @enigma0x3, which is Fileless UAC bypass. It changes the registry key – ‘HKCRmscfileshellopencommand’ default value to point at the ‘.cmd’ file which will cause BitPaymer to run with high privileges without a UAC prompt. If it does not succeed in elevating its privileges, BitPaymer will exit without encrypting the filesystem.

The abuse of eventvwr.exe  and similar types of registry hijack elevation techniques are a serious architecture weakness and are very popular among malware. It is also easy to tweak the technique to bypass any existing detection solution.

When running with high privileges, BitPaymer deletes shadow copy files from the host. It does this by running the command ‘vssadmin.exe Delete Shadows /All /Quiet’ and ‘diskshadow.exe /s %TEMP%<tempfile>.tmp’ (<tempfile>.tmp = “delete shadows allrnexitrn”) for Windows Server versions.

Next, it tries to take ownership of a random service by using ‘takeown.exe /F <service_name>’ and ‘icacls.exe <service_name> /reset’. If it succeeds, it saves a copy of the service in ‘:0’ alternate data stream for restoration purposes. It then replaces the service with a copy of its own and executes BitPaymer as a service.

After successfully hijacking and running from a service, BitPaymer begins to encrypt the filesystem. First  it does iterates logical drivers, including network drivers, by mapping the network using the commands ‘arp.exe -a’ and respectively ‘nslookup.exe <IP>’. After gathering all applicable drivers, it recursively iterates each file in each driver. From each driver, it collects all the files that are not: ‘.exe’, ‘.dll’, ‘.<company_name>’, ‘.<company_name>_readme’. 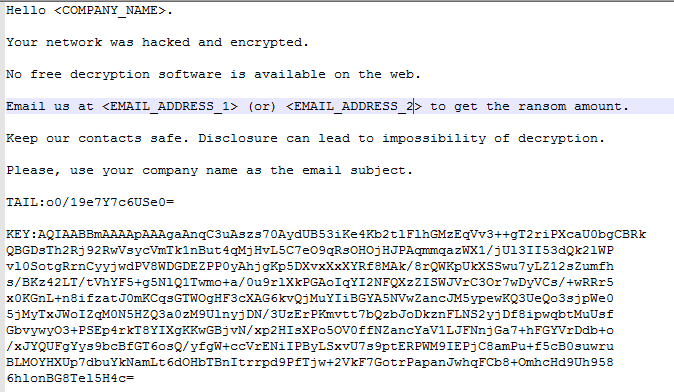 The threat group behind BitPaymer has successfully hit numerous targets and shows no sign of slowing down. The Customer Packer framework it is now using allows it to create what are essentially new variants hours before the ransomware is deployed, which are extremely difficult for detection-dependent security systems to catch.

Morphisec is powered by Moving Target Defense, which blocks such attacks deterministically, without any prior knowledge or required updates.

NOTE: Morphisec prevented this attack immediately, without using rules, signatures or any other type of prior knowledge. The rules and hash below are provided as a service to the community and to other security solutions who do need and use prior knowledge to detect attacks.

Unlike old BitPaymer samples which had PDB path resemblance to Dridex samples. Some of the newer samples, which are packed with a new custom packer have – ‘RWKGGE.PDB’ pdb path.

*** This is a Security Bloggers Network syndicated blog from Morphisec Default Blog authored by Arnold Osipov. Read the original post at: https://blog.morphisec.com/bitpaymer-ransomware-with-new-custom-packer-framework