Late 1986 (a few months before I started my first non-newspaper delivery and non-family-business job – working at a local supermarket) I launched my first bulletin board system (BBS). I can’t remember the software that I was running at the time, but it had a single 14k dial-up facility running on all the extra C64 equipment I’d been “gifted” by friends wanting faster/always access too my latest cheats and hacks.

Sponsorships Available
The premise behind the BBS was two-fold: I wanted to learn something new (and hacking together a workable and reliable BBS system in the mid-80’s was a difficult enough challenge), and I saw it as a saving time distribution channel for my cheats/hacks; others could dial-in and download themselves, instead of me messing around with stacks of floppy discs etc.
At some point in 1986 I’d also saved enough money to by an IBM PC ATclone – a whopping 12Mhz 80286 PC, complete with Turbo button and a 10Mb hard drive. I remember specking out the PC with the manufacturer. They were stunned that a kid could afford their own PC AT and that he planned to keep it in his bedroom, and that he wanted an astounding 16k of video memory (“what do you need that for? Advanced ACAD?”)!
By 1989 the BBS had grown fairly large with a couple hundred regular members with several paying monthly subscription fees, but the stack of C64’s powering the BBS were showing their age and, in the meantime my main computing had moved down the PC path from 286, to 386, and to a brand-spanking new 486.
It was time to move on from C64 and go full-PC – both with the BBS and the hacks/cheats I was writing.
So in 1990, over the Summer/Christmas break from University I set about shifting the BBS over to a (single) PC – running Remote Access, with multiple dial-in lines (14.4k for regular users and 28.8k for subscribers). 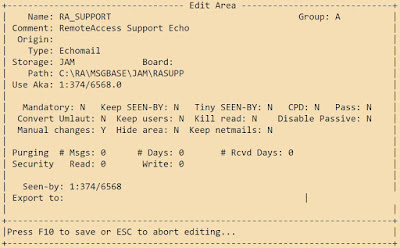 The dropping of C64 and move to fully-fledged x86 PC resulted in a few memorable times for me:
That fumbling about and experimenting with PC hardware, MS-DOS, and Windows at home and with the Bulletin Board System, coupled with learning new systems at University such as DEC Alpha, OpenVMS, Cray OS, and HP-UXin the course of my studies, and the things I had to piece-together and program at my parents factories (e.g. PLC’s,  ICS’s, RTU’s, etc.) all combined to add to a unique perspective on operating systems and hardware hacking.
By the time I’d finished and submitted my post-grad research thesis, it was time to tear down the BBS, sell all my computers and peripherals, and leave New Zealand for my Great OE(Overseas Experience) at the end of 1994.

This is PART TWO of THREE.

PART ONE (C64 Hacking) was posted yesterday and PART THREE (Radar Hacking) will be on Wednesday.

*** This is a Security Bloggers Network syndicated blog from Technicalinfo.net Blog authored by Gunter Ollmann. Read the original post at: http://technicalinfodotnet.blogspot.com/2019/01/hacker-history-ii-bbs-years.html