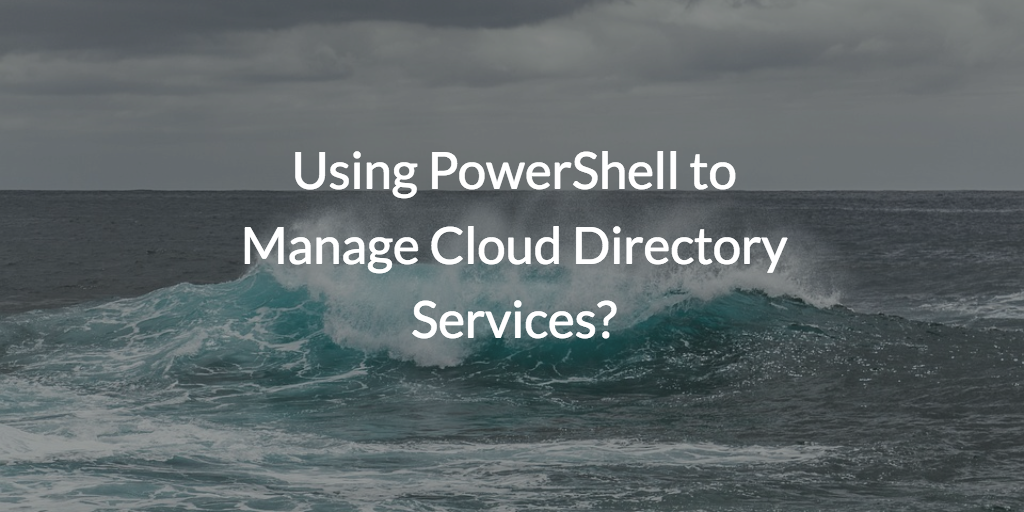 IT admins have used PowerShell in concert with the traditional IdP, Microsoft® Active Directory® (AD) for many years. Task automation and configuration management via PowerShell can be used to control many functions in Active Directory. PowerShell enabled IT to manage their AD instances at scale, with programmatic efficiency rather than manual configuration.

With the shift to cloud infrastructure and non-Windows® platforms, AD no longer has the same type of impact in the identity and access management (IAM) arena. Today’s organizations are leveraging resources such as AWS® and GCP™, G Suite™ and Office 365™, Mac® and Linux® machines, web applications and cloud storage, and more. AD, known for its practically permanent position on-prem, struggles to authenticate to resources like these. The result is that IT admins have gained interest in cloud directory services, but one hurdle for them to consider is how to automate their IAM platform.

The good news is that a leading cloud directory service, called JumpCloud® Directory-as-a-Service®, has built a powerful PowerShell module to handle virtually every directory services function through the automation framework.

IT admins can provision, deprovision, and modify user access from the JumpCloud PowerShell module. Activities such as running commands and policies can be handled from the module as well. To simplify the process for IT admins, unlocking users and resetting passwords is another part of the JumpCloud PowerShell module. In addition, Dynamic VLAN assignments for RADIUS users is a new capability of the module.

*** This is a Security Bloggers Network syndicated blog from Blog – JumpCloud authored by George Lattimore. Read the original post at: https://jumpcloud.com/blog/powershell-cloud-directory

Sontiq BreachIQ Data Breach Report: Week of Nov. 22
Biggest Single Crypto Theft: Teen Charged with $36M SIM-Swap Heist
Is Ransomware a Technology Pandemic in the Making?
8 Security Developments to be Thankful For in 2021
How to Fix Cybersecurity Recruiting
The BABADEDA Crypter – an Emerging Crypter targeting the Crypto, NFT, and DeFi communities
7 Audacious Hacks & What We Can Learn From Them …
Sensors Data Management, IoT Mining and Analytics
Which Data Do Ransomware Attackers Target for Double Extortion?
Five New Vulnerabilities Disclosed in Patient Monitoring Systems