Dark Reading and Forbes, among various other sources, have recently reported that Windows computers using the hardware encryption feature of many different types of solid-state drives (SSDs) are vulnerable to attacks that defeat it completely. These vulnerabilities, discovered by Radboud University researchers Carlo Meijer and Bernard van Gastel, affect multiple models including some made by the popular brands Crucial and Samsung.

A draft of the detailed report is available with more details on the attacks. 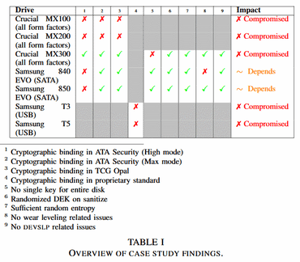 The first way you can identify systems running Bitlocker with hardware encryption is by running the following command in an elevated PowerShell terminal:

You will then get a report on the encryption status of the drives on that system.

The interesting field is Encryption Method. If you had a system using hardware encryption, that field would report HARDWARE_ENCRYPTION.

*** This is a Security Bloggers Network syndicated blog from Uptycs Blog authored by Guillaume Ross. Read the original post at: https://www.uptycs.com/blog/vulnerabilities-in-ssd-encryption-using-osquery-to-identify-affected-machines

Apple Security is Garbage—Change My Mind
Apple Patches Pegasus Spyware Flaw for iOS Devices, Macs
Ericom Survey Shows Shift to Zero-Trust IT Architectures
Aligning Cloud Security to the Cybersecurity Exec Order
Securing the Edge in a Hybrid Environment
Tesla v10 FSD Update is Yet Another Safety Disaster
Phishing Attacks Getting Sneakier with Open Redirects
Using the WPScan plugin to find vulnerabilities in your WordPress website
Data security is broken: What’s next?
What is Driving the Surge of Ransomware Attacks?