by Codifyre on November 4, 2018
We’re back!… it’s been a year since the first podcast on Bitcoin and wow….  things have happened.  It’s also been about 6 months since the last podcast so if you’re back as well I’m a happy man.  Welcome back.
Also… I have another podcast for the real geeks out there.  My work has commission a podcast called Hacking Security.  You can find that on all good podcast sources like iTunes and the various Android hosts like Stitcher.   Check it out if you like the security aspects of what I talk about but it will be a tad focused on software developers looking to be more secure in what they do.
Ok… Let’s get into it.  Last year at this time Bitcoin was going haywire!  It was on what seems to be the never ending rise to THE MOON!   Until it stopped just shortly into 2018.  Totally unpredictable behaviour.  Stupid bitcoin!  Or is it?
There is a pattern.  Ok a few patterns but this one struck me as interesting.
If you check out the blog article or this podcast on Codifyre.com you’ll see a few graphs of bitcoin over the years.  The all time price isn’t really that interesting because the big 2017 Christmas spike kind of skews the whole thing but the idea is that it’s generally going up with basic awareness.  That doesn’t give it real value so much as real potential value.
What IS interesting is the behaviour of the price when the media gets involved and starts hyping it.  Part time thrill seekers get into the crypto band wagon and shit gets crazy.  In fact if you think last year was a bizarre anomaly, and do check out the price graph for Nov 4th 2017 to Nov 4th 2018 to get a feel for the signature of that crazy…. 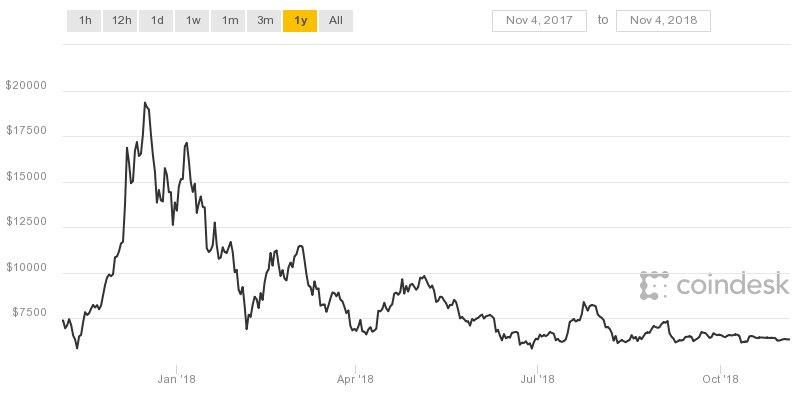 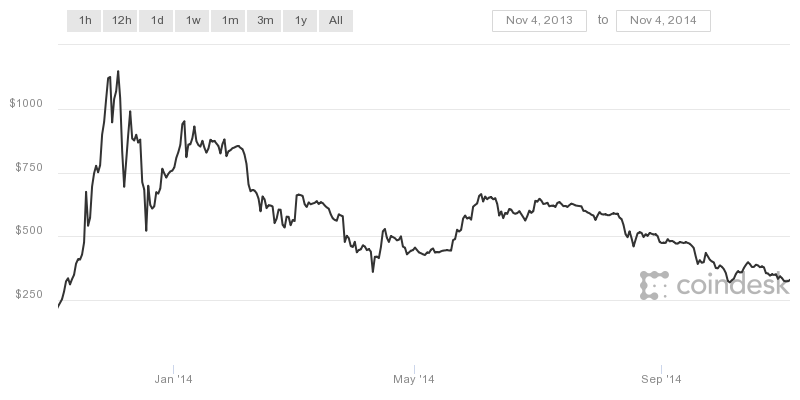 If you check out the graph, although the pricing is almost exactly 20 times smaller, the shape of the graph can almost be overlaid on the graph from 2017/18 and it was even the exact same time of the year as Christmas approaches.
Driven by media and speculation, people react almost exactly the same and it appears that 4 years is the magic amount of time for us humans to totally forget that we already did it once and, just go ahead and do it again.
This is NOT investment advice but… I’m looking forward to see what happens on Nov 4th 2021!!!
In short… if you’re hearing about it… it’s going up… if you aren’t hearing about it… it’s going down.
Let’s get away from Bitcoin for the moment… and talk about some of the other big ones like Ethereum and Litecoin.
I like Ethereum and I don’t entirely understand Litecoin yet but it’s definitely got a good following.
The reason I like Ethereum is it has a leader (who is real), it had a plan and it has one really critical differentiator that I think a lot of people will like and that’s the Proof of Stake system it’s got in it’s roadmap for the future.
Before I get into that though. the reason I like Ethereum is because it’s not a straight up cryptocurrency.   It’s a platform for the creation of Smart Contracts.  There’s that marketing word again.. “smart”… like the Smart Office where nobody get’s a desk assigned.   It’s all “hotdesks”.   And then like a high school cafeteria, everybody sits in the same seat anyway.
It’s better than that though.  The word Smart aside, it’s a way of using the blockchain technology to record a contract in sequence using the immutable nature of blockchain.   This could be anything from taking out a mortgage to creating a will to buying insurance or perhaps taking our a copyright or patent.  There are all things you’d like to know cannot be manipulated later on and blockchain seems to fit the bill.
What’s also interesting is that other Cryptocurrencies can be built on top of Ethereum, other than the build it currency “Ether” which is designed to “fuel” contract transactions.  It’s quite a clever concept and one that has already been commercialised in the form of Hyperledger.  A technology being investigated and invested in by financial institutions AND one that was recently and publicly shown to be hackable by one of my colleagues at my work.  I’ll leave that for you to investigate but I will be diving into that in a future episode of the other podcast Hacking Security.
Anyhow… smart contracts make sense.  In fact, Ethereum might even go so far as to showing it had a real purpose and a valid use case unlike almost every other crypto currency or blockchain initiative out there.
It also brings to the table a real game changer:  Casper for Ethereum or.. Proof of Stake
Proof of Work vs Proof of Stake

Bitcoin alone annually consumes 28.48 TWh worth of electricity. The country of Ecuador consumed around 21 TWh!

What makes the Ethereum PoS different?
Casper is the primary work of Vlad Zamfir, and has implemented a process by which they can punish all malicious elements.
I see it a bit like a poker game.  Everybody who thinks they have the winning hand puts in a stake.  Everybody who is a node on the network (the game) has anted up (placed some Ether at stake).  Imagine if you always had to show your cards though.  You’d really have to have a good hand.  A bluff would be considered a malicious attempt to manipulate the system.

Ok that’s a pretty rough analogy but that’s the idea.  You don’t participate unless you’re acting the best interests of the network and if you try to pull a fast one and verify a fraudulent transaction to your own game, the network will shut you down and take your stake.  There is a rough analogy that the more Ether you have, the more stake you can place to validate blocks and therefore the more you can make.  You might think this could be gamed by owning 51% of the stake (total Ether).

The problem with that is, owning 51% of Ether would current mean you have 525,162,256 Ether, a total value of 10.5Billion USD.  Why exactly are you now gaming the network AND… what if you are caught… you lose your 10.5Billion AND seeing as your wealth depends heavily on the value of Ether, you would like be an evangelist of the currency, not trying to manipulate it.   It’s a rare form of wealth breeding honesty.   Strange.
I closing I’m looking forward to the big question of WHEN will all this happen?  Not only am I curious because I think it’ll be a game changer for Ethereum and Crypto technologically but also a huge change for the ecological aspect of crypto as others hopefully follow suit. Generally, I think it’ll be one of those watershed technology moments like last year in July where suddenly the price and value of Ethereum could change in a significant way.  Or maybe not.  That’s crypto for you.

The post The Rise and Fall (and repeat) of Crypto appeared first on Codifyre.

*** This is a Security Bloggers Network syndicated blog from Codifyre authored by Codifyre. Read the original post at: https://codifyre.com/technology/the-rise-and-fall-of-crypto/