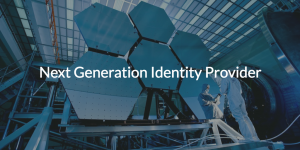 Change is the impetus for innovation in every industry. Once organizations reimagine the archaic ways of operating, they open themselves up to innovative advancements that put them on the cutting edge. While this thought may seem rudimentary, the market for identity providers (IdPs) remains stagnant. Luckily, as the IT realm shifts towards the cloud, admins are beginning to question the functionality of traditional IdPs and are looking for a next generation identity provider.

What is an Identity Provider?

The purpose of an identity provider is to provision users with a centralized identity. The IdP contains every user’s identity in a manageable database where IT admins can collect each user’s personal data to build a unified identity for each member within their organization. That identity can then be used to define what resources that user can access. This functionality makes the identity provider a crucial component of any company’s IT operation.

For many of today’s IT organizations, the traditional IdP of choice has been Microsoft® Active Directory® (MAD or AD). Given MAD’s sheer dominance of the IT scene, its current position in the market makes sense. When it was first introduced nearly two decades ago, MAD took the IT world by storm thanks to the fact that the workplace was almost entirely Windows®-based. MAD’s work as an IdP was made easy since it only had to communicate with the OS it was designed for.

Innovations in the IT Space

It wasn’t long, however, until the winds of change began to blow for MAD. Innovations began to appear in IT, including notable novelties like Software-as-a-Service resources like Salesforce, upticks in Mac® and Linux® machine usage, and, most importantly, the debut of the cloud. Locked on-prem and tethered to Windows, MAD’s usefulness in the face of these new approaches to IT came into question.

In spite of its now questionable functionality, however, admins continued to leverage the legacy identity provider as best they could in the face of a changing industry. Armed with new tools, called Identity-as-a-Service (IDaaS) or web-app single sign-on (SSO) solutions, IT organizations attempted (Read more...)

*** This is a Security Bloggers Network syndicated blog from Blog – JumpCloud authored by Zach DeMeyer. Read the original post at: https://jumpcloud.com/blog/identity-provider-next-generation