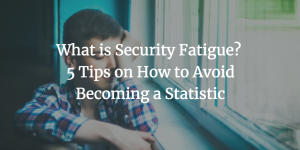 In today’s world, information security breaches are about as common as the cold. Similarly to the common cold, the public is getting sick of hearing that another company they’ve put their trust into has been compromised. As more breaches happen, each one becomes another banal fact of life. Complacency, however, is the impetus of almost every breach in history, and often arises due to security fatigue. But, what exactly is security fatigue? Well, here is the definition of the term, and five ways you can avoid it.

What is Security Fatigue?

In the modern 24-hour news cycle, too often we can be overloaded with information, and in today’s world, some of that information can be emotionally powerful. The news can be so overwhelming that people can fall into a state of “compassion fatigue.” Compassion fatigue is the feeling of complete emotional exhaustion and hopelessness after an onslaught of strong emotional stimulus, such as a tragedy in the news. Well, many of today’s security professionals feel that a similar effect can result from security breaches.

Security fatigue is a sense of complacency felt after hearing about security breaches over and over and over and… you get the picture. With repeated news of security breaches, it’s not hard to grow weary of hearing about things like password changes. For instance, two weeks ago, another massive identity security compromise hit the news; telecom giant T Mobile lost the information of 2 million customers. From the outside looking in, it just seems like another statistic, another giant corporation being irresponsible with their security practices, and yet another reminder to change your passwords. For the victims involved, however, the repercussions were enormous.

The Aftermath of a Breach

The company itself lost the personal information of 2 million customers, accounting to almost $2 million worth, and as a result, they lost their customers’ trust. About 3% of their 75 million person customer base was affected by the breach, which left them feeling not only concerned regarding their personal information, but wary of T Mobile as a whole. The same could be said for the (Read more...)

*** This is a Security Bloggers Network syndicated blog from Blog – JumpCloud authored by Zach DeMeyer. Read the original post at: https://jumpcloud.com/blog/what-is-security-fatigue-5-tips/