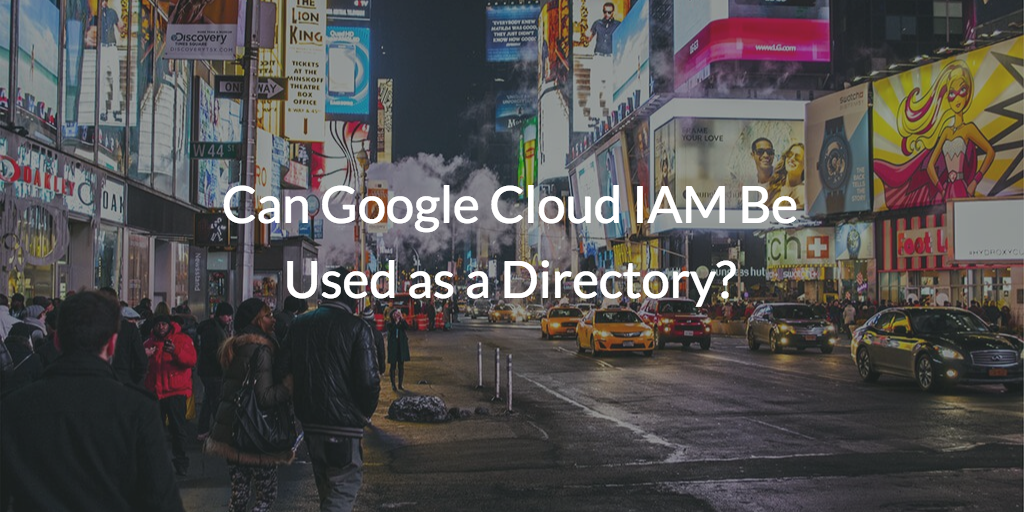 Google® has recently introduced a new solution to their Cloud Platform. The solution is called Google Cloud Identity and Access Management (IAM), and it is currently in the beta stage. Because of its novelty, many IT admins are wondering what the impact of this cloud identity management solution is. Specifically, can Google Cloud IAM be used as a directory service similar to the on-prem Microsoft® Active Directory®?

In order to understand why some are considering using Google Cloud IAM as a directory, it’s important to look at Google’s Cloud Platform stance as a whole. With the introduction of G Suite™ (formerly Google Apps), Google took their first foray into the enterprise-level, Software-as-a-Service (SaaS) productivity suite game. Their primary target with G Suite was replacing Microsoft Office®, Exchange®, and Windows® File Server with a unified cloud-based solution.

As far as offering a cloud-driven productivity suite goes, G Suite met the target with aplomb. Over four million customers paid for the solution last year, with even more jumping on the bandwagon this year. When it comes to being a dominant player in the productivity suite scene, G Suite is king, sitting at 63.75% of market share, compared to Microsoft’s competing product, Office 365™ (which holds 36.23%). While they have certainly seemed to blow Microsoft out of the water in the productivity suite arena with G Suite, Google’s intention wasn’t to compete with Active Directory (AD) in directory services, but rather be a complement to it.

Because of AD’s dominance in the directory service market and its deep roots on-prem, it seemed a futile task to try to take it on with a cloud-based solution. So, Google instead decided to integrate with AD. With the introduction of GADS (Google Apps Directory Sync or now called GCDC – Google Cloud Directory Sync), Google bridged the gap between their cloud offerings and Active Directory. GCDS enables IT admins to connect their on-prem AD to G Suite and other parts of the Google Cloud Platform. As a result, admins (Read more...)

*** This is a Security Bloggers Network syndicated blog from Blog – JumpCloud authored by George Lattimore. Read the original post at: https://jumpcloud.com/blog/can-google-cloud-iam-be-used-as-a-directory

Home Routers are Full of Security Bugs—Patch NOW
Your CEO Isn’t Real: How to Deal With Deep Fakes
Why America Needs Data-Centric Zero-Trust
Increasing Network Visibility: The Key to Security
IKEA Reply Chain Attack Spotlights Need for Security Boost
DDOS Attacks Targeting Payment Services of Global Financial Institutions
All You Need to Know About the DOJ’s Civil Cyber-Fraud Initiative
Who Is the Network Access Broker ‘Babam’?
Online Shopping Reminder: If It Looks Too Good To Be True …
BSidesKC 2021 – Kevin Shekleton’s ‘The Future of Computer Security’