July 1st marks the beginning of a Civil War battle that many historians say is one of the most pivotal.

And, as many historians also like to note, desperation for shoes drew the pro-slavery forces arrogantly into Gettysburg on this date. The question of shoes is tied to General A. P. Hill, a wealthy elitist of Virginia who eagerly had abandoned his U.S. Army appointment before the start of war in order to fight against his own country and preserve slavery.

You may be surprised to see the U.S. Army has named a fort after such an infamously treasonous man like A. P. Hill since he dedicated his life to killing American soldiers:

The installation was named in honor of Lt. Gen. Ambrose Powell Hill, a Virginia native who distinguished himself…

Note that they don’t call him an American, because his treason to preserve slavery killed his citizenship. Nice try with that Virginia reference but obviously he was far from being a true native of Virginia. That being said I must agree with the second part, as he certainly distinguished himself. The U.S. Army doesn’t mention it but his impatient arrogance and lust for plunder became one of the greatest tactical blunders in U.S. military history.

Now, to be fair, it was pro-slavery General Heth on June 30th, 1863 who had ordered pro-slavery General Pettigrew to enter Gettysburg and supply themselves with new shoes. Pettigrew had followed these orders at first but turned tail after he observed American cavalry and infantry already near the town.

In “The Civil War: A Narrative” Hill approaches Heth and hears of Pettigrew’s reluctance. Then Hill insists to Heth there was no significant American forces present. OOPS. Heth then prompts Hill to send Pettigrew back once again to plunder Gettysburg and “get those shoes!” 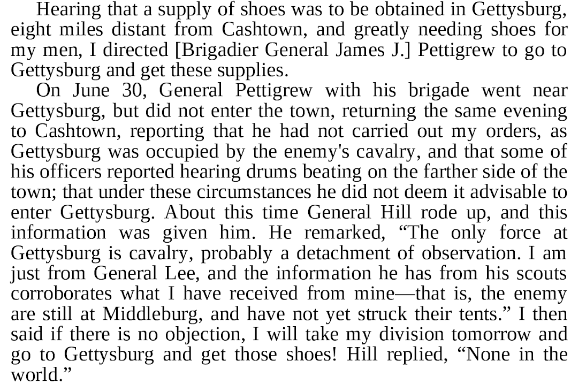 Narratives aside, by 5AM on July 1st, as Heth himself approached Gettysburg, he realized Pettigrew had been right, Hill was wrong, and significant numbers of American forces were present. Yet even that didn’t dissuade him, and he continued giving orders to Pettigrew to march on.

Hill’s insistence to his men they would encounter no resistance seems to be the real story here, shoes or not. Of course it’s too hard to not combine it with an inherent desperation of pro-slavery men to plunder America. Shoes or not it was Hill’s arrogance fueling Heth’s impatience that began the largest land battle in the western hemisphere, lasting 3 days and killing nearly 50,000.

One of the stranger footnotes (no pun intended) to this story is Gettysburg didn’t really have any shoes at all, while it did really have a lot of American forces. This means there were two levels of blindness.

The pro-slavery General Early (infamous for helping to invent the “Lost Cause” view) rode through the town days before Heth had set his sights on it. Americans living in Gettysburg were subjected to Early’s pro-slavery militia demanding ransom in 1,000 shoes and pillaging the town; apparently no shoes were found. 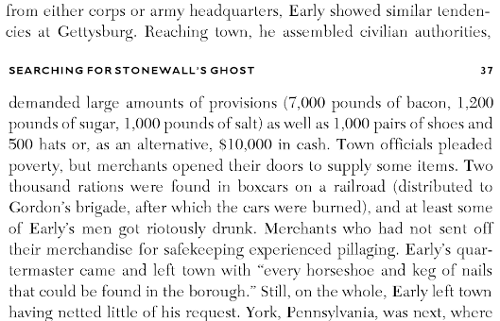 Early could have reported no shoes, but perhaps it wouldn’t have made any difference given how Pettigrew did report what he saw. In any case the pro-slavery forces were defeated at Gettysburg, which helped signal the end of their plans to expand slavery into western territories by waging war with America.

*** This is a Security Bloggers Network syndicated blog from flyingpenguin authored by Davi Ottenheimer. Read the original post at: http://www.flyingpenguin.com/?p=22953