After decades of seeing activists lay out the obvious economics of meat, and reading research by economists confirming the obvious, it looks as if the market finally is shifting. Eating meat is by far the number one impact to climate change and executives are starting to execute on the meatless menu.

It always has seemed weird to me that if you wanted to remove meat from your work meals, or airplanes for that matter, you had to check a special box. Really it should be the other way around. If someone wants to add meat, let them be the “special” case.

Makes little to no sense to have meat as a default, and people should have to choose to accelerate global destruction, rather than set it as the mindless default. Not saying I would never check the box, or there would never be need for meat, just that I would always want the default to be meatless. When I say make it rare I mean it both ways. The economics of why are obvious, as I will probably say continuously and forever.

For example, years ago I was running the “Global Calculator” created for economic modeling, and reducing meat consumption undeniably had more impact than any other factors. 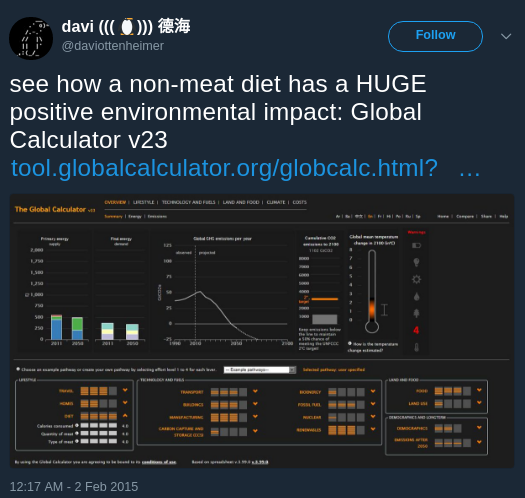 A sad and ironic side note here is the fact that meat consumption is the top factor in the “extinction crisis“, as 3/4 of earth’s animal population is disappearing at an alarming rate.

Thus a logical approach to solving many of the expensive problems people face today and into the future is to limit meat consumption within commercial space, because that’s where some expansive top-down decisions easily are made.

Imagine Google removing meat from its school-lunch-like program for its school-campus-like facilities for its school-children-like staff running its school-peer-review-like search engine. Alas, that probably means executive leadership (less like kids trying to stay in school forever) where someone issues a simple order to take a stand.

The first step on this path really should be Mar-a-Lago converts to vegan-only menus and becomes a research center for climate change, but I digress…

Instead it looks like Wework has apparently woke, and removed meat from its menus.

…told its 6,000 global staff that they will no longer be able to expense meals including meat, and that it won’t pay for any red meat, poultry or pork at WeWork events. In an email to employees this week outlining the new policy, co-founder Miguel McKelvey said the firm’s upcoming internal “Summer Camp” retreat would offer no meat options for attendees.

“New research indicates that avoiding meat is one of the biggest things an individual can do to reduce their personal environmental impact,” said McKelvey in the memo, “even more than switching to a hybrid car.”

It’s crazy to me that someone is calling out new research here when there is so much legacy work, but I guess that covers the question why they waited so long to do the right thing.

And just in case any of the typical extremist right-wing tech professionals (Shout out to the 303!) read this blog post, I offer this tasty morsel on vaccinating the mind against climate change falsehoods:

To find the most compelling climate change falsehood currently influencing public opinion, van der Linden and colleagues tested popular statements from corners of the internet on a nationally representative sample of US citizens, with each one rated for familiarity and persuasiveness.

The winner: the assertion that there is no consensus among scientists, apparently supported by the Oregon Global Warming Petition Project. This website claims to hold a petition signed by “over 31,000 American scientists” stating there is no evidence that human CO2 release will cause climate change.

The study also used the accurate statement that “97% of scientists agree on manmade climate change”. Prior work by van der Linden has shown this fact about scientific consensus is an effective ‘gateway’ for public acceptance of climate change.

Bring out the facts! Security professionals often ignore climate change harm and need facts as a gateway to accept climate change risks. Maybe a good time to impact self-proclaimed security elites could be when they head to Las Vegas this summer…observe them carelessly gorging themselves on meat while claiming to care about data and risk, and hand them an invite them to an exclusive WeWork party.

*** This is a Security Bloggers Network syndicated blog from flyingpenguin authored by Davi Ottenheimer. Read the original post at: http://www.flyingpenguin.com/?p=23036