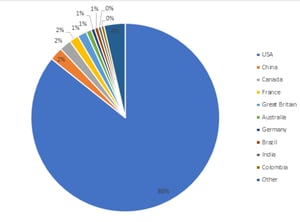 Earlier this year we released our annual Phishing Trends and Intelligence report, which highlights how the phishing landscape has evolved over the past year.

As usual we identified a number of key shifts in threat actor behaviors. In particular, we noted a substantial shift towards targeting enterprises rather than consumers, as well as a number of changes to the geographic spread of phishing attacks.

When it comes to the geographic spread of attacks, the main headline is simple. In short, the U.S. is still the primary target for phishing attacks, and the share of attacks against US-based targets continues to grow.

But while attacks against U.S. targets continued to rise, several countries that saw significant increases in phishing volume during 2016 experienced corresponding decreases in 2017.

Another interesting change was a significant decline in phishing attacks targeting British organizations. Back in 2014, British institutions were the second-most popular target for phishers, comprising eight percent of all phishing attacks globally. Over the past four years, though, the number of attacks against British targets has fallen by nearly 80 percent, making Britain only the fifth-most targeted nation in 2017.

Get the Low-Down on Phishing

Every year, when we release our annual Phishing Trends and Intelligence (PTI) report, we see shifts in the phishing landscape. As organizations and individuals become more savvy to phishing attacks, phishers are forced to develop new techniques and select new targets.

Your ability to defend against phishing attacks depends heavily on your understanding of how and where you’re likely to be targeted.

To find out how the phishing landscape evolved over the last year, including the most commonly observed tactics and targets, download your free copy of our latest PTI report here:

Get the 2018 Phishing Trends & Intelligence Report

*** This is a Security Bloggers Network syndicated blog from The PhishLabs Blog authored by Crane Hassold, Senior Security Threat Researcher. Read the original post at: https://info.phishlabs.com/blog/phishing-attacks-by-country-2018