Previous stories here on the proliferation of card-skimming devices hidden inside fuel pumps have offered a multitude of security tips for readers looking to minimize their chances of becoming the next victim, such as favoring filling stations that use security cameras and tamper-evident tape on their pumps. But according to police in San Antonio, Texas, there are far more reliable ways to avoid getting skimmed at a fuel station.

San Antonio, like most major U.S. cities, is grappling with a surge in pump skimming scams. So far in 2018, the San Antonio Police Department (SAPD) has found more than 100 skimming devices in area fuel pumps, and that figure already eclipses the total number of skimmers found in the area in 2017. The skimmers are hidden inside of the pumps, and there are often few if any outward signs that a pump has been compromised.

In virtually all cases investigated by the SAPD, the incidents occurred at filling stations using older-model pumps that have not yet been upgraded with physical and digital security features which make it far more difficult for skimmer thieves to tamper with fuel pumps and siphon customer card data (and PINs from debit card users).

Lt. Marcus Booth is the financial crimes unit director for the SAPD. Booth said most filling stations in San Antonio and elsewhere use legacy pumps that have a vertical card reader and a flat, membrane-based keypad. In addition, access to the insides of these older pumps frequently is secured via a master key that opens not only all pumps at a given station, but in many cases all pumps of a given model made by the same manufacturer. 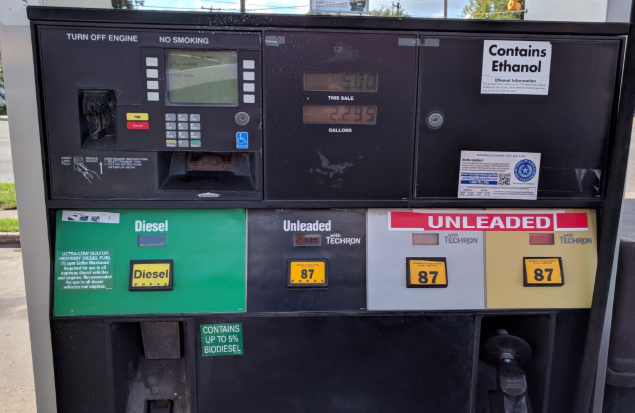 In contrast, Booth said, newer and more secure pumps typically feature a horizontal card acceptance slot along with a raised metallic keypad — much like a traditional payphone keypad and referred to in the fuel industry as a “full travel” keypad: 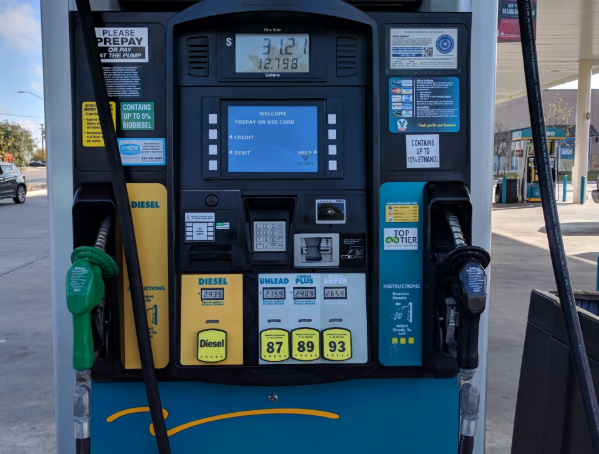 Booth said the SAPD has yet to see a skimming incident involving newer pump models like the one pictured directly above.

“Here in San Antonio, many of these stations with these older keypads and card slots were getting hit all the time, sometimes weekly,” he said. “But as soon as those went over to newer gear, we’ve seen zero problems.”

According to Booth, the newer pumps include not only custom keys for each pump, but also tamper protections that physically shut down a pump if the machine is improperly accessed. What’s more, these more advanced pumps do a better job of compartmentalizing individual components, very often enclosing the electronics that serve the card reader and keypad in separately secured metal cages.

“Pretty much all these full travel metallic keypads are encrypted, and if you disconnect them they disable themselves and can only be re-enabled by technician,” Booth told KrebsOnSecurity. “Also, if the pump is opened improperly, it disables itself. These two specific items: The card reader or the pad, if you pull power to them they’re dead, and then they can only be re-enabled by an authorized technician.”

Newer pumps may also include more modern mobile payment options — such as Apple Pay — although many stations with pumps that advertise this capability have not yet enabled it, which allows customers to pay for fuel without ever sharing their credit or debit card account details with the fuel station.

One reason that pump skimmers seem to be more pervasive is that authorities across the country are doing a better job of working with banks and federal investigators to determine fuel stations that appear to be compromised. The flip side is that thieves are generally opportunistic, and tend to focus on targeting systems that offer the least resistance and lowest hanging fruit.

Unfortunately, there is still a ton of low-hanging fruit, and these newer and more secure pump systems remain the exception rather than the rule, Booth said. In December 2016, Visa delayed by three years a deadline for fuel station owners to install payment terminals at the pump that are capable of handling more secure chip-based cards. The chip card technology standard, also known as EMV (short for Europay, MasterCard and Visa) makes credit and debit cards far more expensive and difficult for thieves to clone.

Under previous credit card association rules, station owners that didn’t have chip-ready readers in place by Oct. 2017 would have been on the hook to absorb 100 percent of the costs of fraud associated with transactions in which the customer presented a chip-based card yet was not asked or able to dip the chip (currently, card-issuing banks eat most of the fraud costs from fuel skimming). Currently, fuel stations have until Oct. 1, 2020 to meet the liability shift deadline.

Some pump skimming devices are capable of stealing debit card PINs as well, so it’s a good idea to avoid paying with a debit card at the pump. Armed with your PIN and debit card data, thieves can clone the card and pull money out of your account at an ATM. Having your checking account emptied of cash while your bank sorts out the situation can be a huge hassle and create secondary problems (bounced checks, for instance).

This advice often runs counter to the messaging pushed by fuel station owners themselves, many of whom offer lower prices for cash or debit card transactions. That’s because credit card transactions typically are more expensive to process.

In summary, if you have the choice, look for fuel pumps with raised keypads and horizontal card slots. And keep in mind that it may not be the best idea to frequent a particular filling station simply because it offers the lowest prices: Doing so could leave you with hidden costs down the road.

If you enjoyed this story, check out my series on all things skimmer-related: All About Skimmers. Looking for more information on fuel pump skimming? Have a look at some of these stories.

*** This is a Security Bloggers Network syndicated blog from Krebs on Security authored by BrianKrebs. Read the original post at: https://krebsonsecurity.com/2018/06/how-to-avoid-card-skimmers-at-the-pump/

What is PSaaS and is it Worthwhile?
The Security Challenges of API Sprawl
PayPal Credential Stuffing Attacks Renew Calls for MFA
CyberInsurance Predictions for 2023
‘Hive’ Russian Ransomware Gang Shut Down by FBI, DoJ, Europol, Bundeskriminalamt, et al
PayPal Breach 2023: Tip of the Iceberg
Administrator of RSOCKS Proxy Botnet Pleads Guilty
Why you should never trust PoC exploits on GitHub
Five Incident Response Metrics you Should be Recording
Silos Are the Enemy of Managing Security Risks, Keeping People Safe