A friend recently went through my liquor cabinet and pulled out a mostly-empty bottle of Knob Creek. I had forgotten about it, although in the early-1990s it had been a favorite. It was introduced to me by a Milwaukee bartender in an old dark wooden dive of a bar on the city waterfront.

“I’ll take whatever” meant he poured me a glass of seltzer, stirred in a spoonful of very dark jam, threw an orange peel twist on top and told me “enjoy life, the old-fashioned way.” It sounded corny (pun not intended), especially when he also growled “this ain’t a bright lights and gin or vodka type place”.

“What’s with the jam?” I asked. He threw a thumb over his shoulder at a cast-iron looking tiny pot-belly stove against a black wall under a small brightly-lit window. I squinted. It was almost impossible to focus on except for its small red light. Steam was slowly rising from its top edges into the bright window. “Door County cherries” he said as he wiped the bar “pick’em myself. That’s my secret hot spiced mash.”

It was a very memorable drink. For years after I continued to have Knob Creek here and there, always thinking back fondly to that waterfront dive bar, and to the advice to avoid “bright lights and gin or vodka”. Knob Creek wasn’t exactly a replacement for the rye I really wanted, yet it was good-enough alternative, and I didn’t drink it fast enough to worry about its rather annoyingly high price of $15 a bottle.

Ok, so my friend pulls this old bottle of Knob Creek out of my cabinet. He’s drinking it and I’m telling him “no worries, that’s an old cheap bottle I can grab another…”. He chokes. “WHAAAT, nooo. Dude the Knob is one of Beam’s best, it’s a $50 bourbon. It’s the really good stuff.” Next thing I know my old Knob Creek bottle is in the recycling bin and I’m on the Internet wondering if I should replace it.

African-American Distillers May Have Invented Bourbon

All the research I had done on Prohibition, a notoriously anti-immigrant white-supremacist movement targeting Germans and Irish, did not prepare me sufficiently for Jack Daniel’s recent adoption of its own history.

This year is the 150th anniversary of Jack Daniel’s, and the distillery, home to one of the world’s best-selling whiskeys, is using the occasion to tell a different, more complicated tale. Daniel, the company now says, didn’t learn distilling from Dan Call, but from a man named Nearis Green — one of Call’s slaves.

The real kicker to this Jack Daniel PR move is that it explains master distillers came from Africa, and slavery meant they ended up in regions that give them almost no credit today:

“[Slaves] were key to the operation in making whiskey,” said Steve Bashore, who helps run a working replica of Washington’s distillery. “In the ledgers, the slaves are actually listed as distillers.”

Slavery accompanied distilling as it moved inland in the late 18th century, to the newly settled regions that would become Tennessee and Kentucky.

American slaves had their own traditions of alcohol production, going back to the corn beer and fruit spirits of West Africa, and many Africans made alcohol illicitly while in slavery.

It makes sense, yet still I was surprised. And after I read that I started to pay attention to things I hadn’t noticed before. Like if you’ve ever watched “Hotel Rwanda” its opening song is “Umqombothi”, which has lyrics about a tradition of corn-mash used for beer in Africa.

Both the use of charred casks and corn mash foundations are being revealed by food historians as African traditions (even the banjo now, often associated with distilleries, is being credited to African Americans). Thus slaves from Africa are gradually being given credit as the true master distillers who brought Bourbon as a “distinctive product of the United States” to market.

Slave owners were not inclined to give credit, let alone keep records, so a lot of research unfortunately still is required to clarify what was going on between European and African traditions that ended up being distinctly American. That being said, common sense suggests a connection between African corn mash and master distiller role of African slaves that simply is too strong to ignore.

If we recognize that master distillers using corn mash to invent Bourbon were most likely slaves from Africa, and also we recognize why and how Prohibition was pushed by the KKK, there is another connection too strong to ignore.

My studies had led me to believe anti-immigrant activists were behind banning the sale or production of alcohol in America. Now I see how this overlooks the incredibly important yet subtle point that master distillers were ex-slaves and their families on the verge of upward social mobility (Jack Daniel didn’t just take a recipe from Nearis Green, he hired two of his sons). The KKK pushed prohibition to block African American prosperity, as well as immigrants.

Let’s take this back a few years to look at the economics of prohibition. Attempts to ban alcohol had been tried by the British King to control his American colonies. In the 1730s a corporation of the King was charged with settling Georgia. A corporate board (“trustees”) was hoping to avoid what they saw as mistakes made in settling South Carolina. Most notably, huge plantations were thought to be undesirable because causing social inequalities (ironic, I know). So the King’s corporation running Georgia was looking at ways to force smaller parcels to create better distribution of wealth (lower concentrations power) among settlers. The corporation also tried to restrict use of Africans as slaves to entice harder working and better quality of settler and…believe it or not, they also tried to ban alcohol presumably because productivity loss.

These 1730s attempts to limit land grabs and ban slavery backfired spectacularly. It was the South Carolinian settlers who were moving into Georgia to out-compete their neighbors, so it kind of makes sense wealth was equated to grabbing land and throwing slaves at it instead of settlers themselves doing hard work. It didn’t take more than ten years before the corporation relented and Georgia regressed to South Carolina’s low settler standards. The alcohol ban (restricting primarily rum) also turned out to be ineffective because slaveowners simply pushed their slaves to distill new forms of alcohol from locally sourced ingredients (perhaps corn-based whisky) and smuggle it.

By the time a Declaration of Independence was being drafted, including some ideas about calling their King a tyrant for practicing slavery, it was elitist settlers of Georgia and South Carolina who demanded slavery not be touched. Perhaps it’s no surprise then 100 years later as Britain was finally banning slavery the southern states were still hung up about it and violent attacks were used to stop anyone even talking about abolishing slavery. While the rest of the Americas still under French, British, Spanish influence were banning slavery, the state of Georgia was on its way to declare Civil War in an expansionist attempt to spread slavery into America’s western territories.

So here’s the thing: the King’s corporation heads inadvertently had taught their colonies how slaves, alcohol and land were linked to wealth accumulation and power. White supremacists running government in Georgia and South Carolina (aspiring tyrants, jealous of the British King) wanted ownership for themselves to stay in power.

Prohibition thus denied non-whites entry to power and ensured racial inequality. Cheaters gonna cheat, and it seems kind of obvious in retrospect that prohibition by both the British King and the US government were clumsily designed to control the market.

The current era of bourbon enthusiasm is based on the products of about seven US distilleries. But before Prohibition, the US had thousands of distilleries! 183 in Kentucky alone. (When the Bottled-in-Bond act took effect in 1896, the nationwide count was reportedly over eight thousand). Each distillery produced many, many different brands.

Prohibition destroyed almost all of those historic distilleries.

From 8,000 small to 7 monster distilleries because…economic concerns of white supremacists running US government.

The KKK criminalized bourbon manufacturing. Thousands, including emancipated master distillers, were forced out of their field. Also in that Bottled-in-Bond year of 1896, incidentally, southern white-supremacists started erecting confederate monuments to terrorize the black population. By the time Woodrow Wilson was elected President in 1906 he summarily removed all blacks from federal government, which one could argue set the stage for a vote undermining black communities, and restarted the KKK. Prohibition thus arose within concerted efforts by white supremacists in America to reverse emancipation of African Americans, deny them social mobility, criminalize them arbitrarily, and disenfranchise them from government.

What’s War Got to Do With the Price of Knob Creek?

Have you ever heard of Otho Wathen’s defense of Whiskey during and after Prohibition?

Otho H. Wathen of National Straight Whiskey Distributing Co. points out: “The increase in 1934 (in drunken driver automobile accidents) for the entire country was 15.90 per cent. The increase in the repeal states, which included practically every big city where traffic is heaviest, was 14.65 per cent. …in the states retaining prohibition the increase was 21.56 per cent.”

I hadn’t heard of him until I read a blog post revealing that Knob Creek was a very old brand, bought inexpensively by National Distillers during the market collapse of Prohibition:

Knob Creek was first in use in 1898, by the Penn-Maryland Corp. I have looked through our archives here (I have the old history books from the companies we acquired when we purchased National Brands)

The blog even shows this “Cincinnati, Ohio” label as evidence of its antiquity: 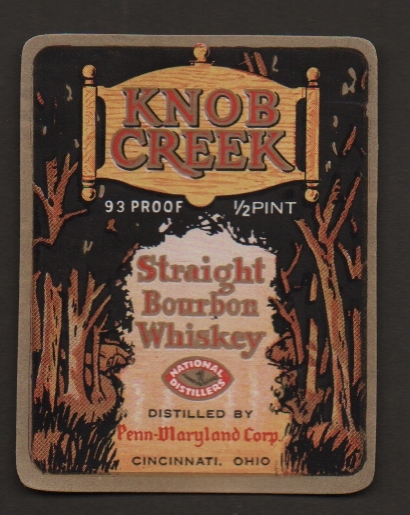 *** This is a Security Bloggers Network syndicated blog from flyingpenguin authored by Davi Ottenheimer. Read the original post at: http://www.flyingpenguin.com/?p=22756

FCC Proposes Stricter Regulations for Data Breach Disclosure
How to Build a Security Awareness Training Program
Does Your Cyberinsurance Policy Cover Cyberwar?
Biden Signs Authority for NSS to NSA: Think CISA for Military, Intel Systems
The Rise of the 24/7 Security Scanning Access Point
How to Back Up and Restore Your Linux System Using the Rsync Utility
20 Years of SIEM: Celebrating My Dubious Anniversary
Critical OWASP Top 10 API Security Threats
When it comes to API security, expect the whole world to be testing your mettle, says Twitter CISO
Crime Shop Sells Hacked Logins to Other Crime Shops